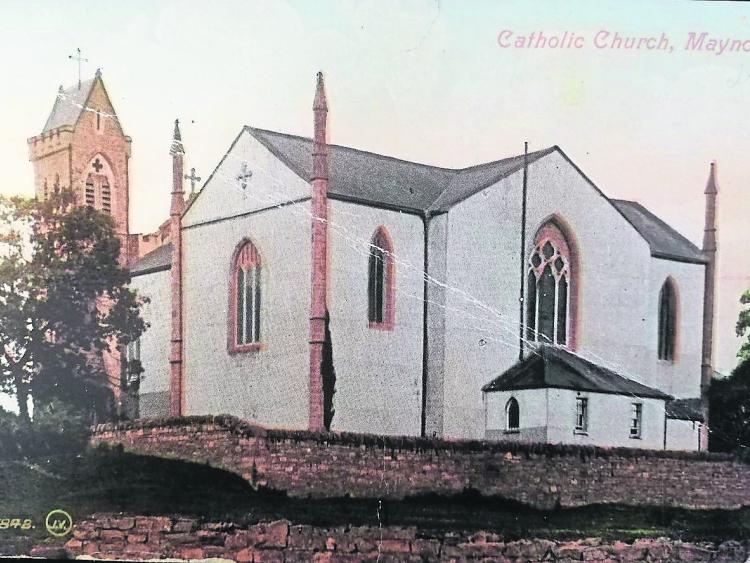 On the night of 21 February 1921, a Royal Irish Constabulary (RIC) patrol was attacked in Maynooth as it approached the Catholic Church. One policeman, Sergeant Hughes, was mortally injured and died the following day from his wounds.

The six-man patrol, with Sgt Joseph Hughes in charge, had been on duty in the town since 8pm. At 10.15 pm, when they were approaching St. Mary’s Catholic Church on the Moyglare Road, shots came from behind a wall near Kavanagh’s Mill. The patrol was in single file — three ‘sticks’ of two men each — with Sgt Hughes leading and Constable Edward Curran directly behind him.

Joseph Hughes fell, hit in the head, while the other constables fell back slightly, lay flat and returned fire. Const. Curran stated that they could not see their attackers owing to the darkness, only the flashes of their weapons over the wall were visible.

Shooting continued for ten minutes until the attackers, coming under increasing pressure from the police fire, escaped under protection of the wall. The police did not pursue them but picked up Sgt Hughes, who was unconscious, and brought him into a nearby cottage. Const. Curran ran back to the RIC barracks in the town and reported the incident. He returned to the scene with a party of five more police.

A local medical officer, Dr Patrick Grogan, also arrived at the scene and finding the sergeant unresponsive ordered an ambulance. Hughes was brought to Dr. Steevens’ Hospital, Dublin — arriving about 1.30 am — where he succumbed to his wounds the next day, without ever regaining consciousness.

A Military Court was held at the Dublin hospital in lieu of an inquest. The body of Joseph Hughes was identified by the deceased’s brother, Andrew Hughes, of Ballylehane, Co Laois. Medical evidence showed that Sgt Hughes died from a bullet wound to the head.

Constable Fallon, who had been in the patrol, gave evidence that the sergeant received a bullet wound to the right jaw which exited at the back of his head. The inquest found that Sgt Hughes was ‘wilfully murdered’ by ‘armed rebels’.

The night after the ambush, a notice was posted in the town imposing a curfew between 9pm. and 5am, by order of Colonel PCB Skinner, commanding 14th Infantry Brigade, Curragh Camp.

According to the Kildare Observer, that night there was ‘almost a complete evacuation of Maynooth by the civilian population… who sought refuge elsewhere through fear of reprisals’.

However, unlike the aftermath of the Kill ambush in August 1920, when Black and Tans rampaged through Kill and Naas looting a pub and burning a shop, nothing happened.

The attack was carried out by members of Kilcock Company, Irish Republican Army (IRA), with other companies assisting in outpost duty. The principal aim of the attack — like that of the Kill ambush — was to capture weapons and in this it failed. IRA companies in Kildare were desperately short of weaponry, one of the reasons why there were few military actions by the IRA in the county.

Nine men were subsequently arrested in Kilcock in connection with the attack. Several of them were taken by police and military to Naas Barracks where they were beaten with rifle-butts and ill-treated by among others, RIC Sergeant Kilkenny. A British officer reputedly stopped the ill-treatment. The men were later transferred by motor lorry to Hare Park Internment Camp, at the Curragh military base.

Mick Flynn, Officer Commanding (OC) of Kilcock Company, led the ambush party on the Moyglare Road. He was from Mill Lane, Kilcock, and had been quartermaster of the company before being appointed OC. Peter Larkin, The Square, Kilcock, was a lieutenant with Kilcock Company and also took part in the attack. With Flynn, he was one of those lucky not to be arrested. Larkin was also Quartermaster of 3rd (Kildare) Battalion, 1st Meath Brigade.

The attack had been planned by Paddy Mullaney, a national schoolteacher from Leixlip. He had been appointed OC 1st Kildare Battalion (later this was changed to 3rd Battalion, 1st Meath Brigade), in November 1920, when its commander, Patrick Colgan, was arrested and interned in Ballykinlar Camp, in Co Down. Mullaney was positioned with men from Leixlip Company on the other side of Maynooth in case the patrol came towards the Dublin road. The Leixlip unit were not engaged in the attack and none were arrested in its aftermath.

Mullaney later formed the North Kildare/Meath Active Service Unit (ASU) which was involved in the attempted de-railing of a troop train near Stacumney, Celbridge, on 2 July 1921.

The victim of the fatal attack, Sgt Joseph Hughes, was 34 and was born at Rathaspick, Wolfhill, near Ballylinan, County Laois, on June 29, 1886. His father William worked as a miner at the local Wolfhill Colliery and Joseph and his three brothers, at some stage worked in the mine. His father, William, died aged 58 in 1903 from asthma; his mother Bridget was described in 1911 as a farmer. Joseph had been a miner in 1901, aged 15, and then became a postman before joining the police force in 1909. He had only recently arrived in Maynooth from Naas Barracks after his promotion to sergeant.

Joseph Hughes was described as ‘a very popular man’ and had spent most of his service in Co Kildare. A Guard of Honour from Naas RIC Barracks, with Co. Inspector Kerry Supple and District Insp. Fallon in charge, met the funeral cortege at Sallins railway station as the coffin was conveyed by train to Athy station. In Naas windows in business establishments were shuttered or had their blinds drawn as requested by the local RIC.

All business premises in Athy were closed between 10am and noon by direction of the police. At the time what was described as a ’significant fact’ was the respect paid to the funeral and the universal condemnation of the killing.

The Leinster Leader of March 5, 1921, carried this report, ‘The funeral of Sergeant Hughes to Wolfhill passed through Athy where all shops were closed ... police with reversed arms marched behind the coffin. A mourning coach covered with wreaths followed the hearse. Fr Byrne officiated. There was an immense crowd present at the funeral’ and a great number of people followed the cortege through the town, with many accompanying it the full 11 miles to the graveyard.

A guard of honour of twenty policemen marched with arms reversed to Ballylinan and from there to the graveyard where Sgt Hughes was interred.

Two weeks after the ambush, on March 7, 1921, Constable Harold Stiff shot himself in the head in Maynooth RIC Barracks. It is possible that Const. Stiff was suffering from post-traumatic stress relating to the attack or fear of having to go on another patrol.

The Military Inquiry into his death stated he died ‘during temporary insanity’. A colleague said that Cons. Stiff’s ‘mind was deranged for some time’. Harold Stiff was 27 and originally from Canning Town, London. He had served in WWI with the Royal Artillery and had worked as a nightwatchman before joining the RIC in August 1920. Stiff, therefore, would have been termed a ‘Black and Tan’.

After the burning of Maynooth RIC Barracks in April 1920, the town had been without a crown forces presence until mid-January 1921, when Larine House near the site of the former Courthouse/Town Hall (blown up in May 1920), was occupied by a small force of regular RIC and British recruits, known as Black and Tans.

Andrew and Mary Hughes, Ballylehane, Co Laois, as representatives of Joseph Hughes, made a compensation claim of £5,000 for the death of their brother. Mr Matheson, DL, instructed by Messers Meehan and Byrne, solicitors, Maryborough, Co. Laois, appeared for the applicants at the County Court in Naas.

District Inspector Fallon gave evidence that the deceased was promoted to sergeant on January 1, 1921. His pay and allowances came to £368.8s a year and Insp Fallon stated that he had no doubt Sgt Hughes would have risen to the rank of head constable if he had lived.

The judge awarded the family £450 with costs and fixed the area of charge as half of Co Kildare and half off Co Meath as the attack had occurred five furlongs from the Co Meath border.

An appeal was lodged by the family. However, at the monthly meeting of Celbridge No. 1 District Council a letter was read from Messers Meehan and Byrne, solicitors, stating that the appeal in claim for compensation in connection with the death of Sgt Hughes would not be proceeded with.