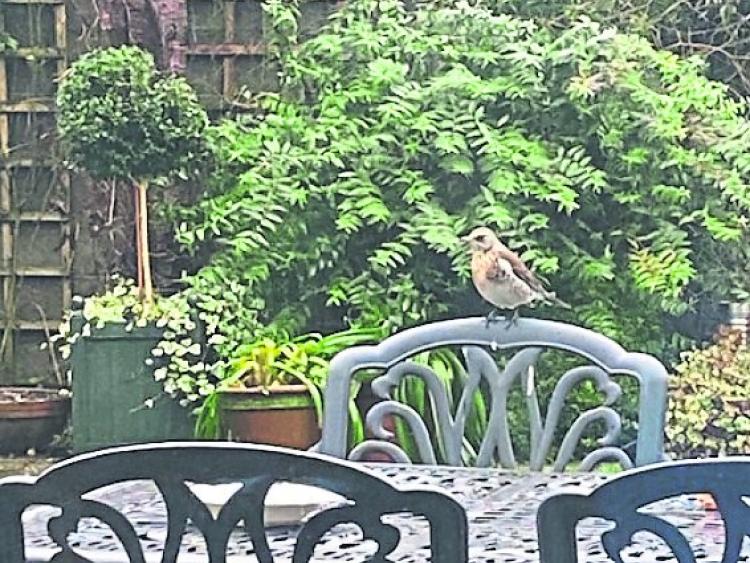 Thanks to a community member, this week I bring you another member of the thrush family.

Recently I have written about the redwing and my own encounter with the mistle thrush. Lucky for us, a community member had a bit more luck then me taking a photo of a fieldfare (sacán as Gaeilge) in his garden.

Similar to the redwing, this is a very widespread winter visitor to Ireland.

According to Birdwatch Ireland, the populations of this bird are healthy. There is still time to witness the fieldfare in your community this year, as they spend between October and March visiting our island.

Its breast has streaks similar to other thrush family members — however in the fieldfare they are black. Its head is grey and, similar to the redwing, it has a white streak by its eyes. The scientific term for the region of the eyebrows is actually called the supercilium.

Its size, as described by Birdwatch Ireland, as similar to a blackbird. The fieldfare does not breed in Ireland, returning to Scandinavia in the summer to nest and rear their young.

They nest in trees with the female building a cup-shaped nest and laying between five and six pale blue speckled eggs.

Both parents feed the chicks and within two weeks they fledge. The fieldfare typically nests in colonies rather than individual pairs. It uses Ireland as a winter retreat from the harsher winters experienced further North.

As this bird’s name suggests, its preferred habitat while visiting Ireland is grassland — however, it can be found in urban parks and gardens in times of poor weather conditions in winter.

As an omnivore, when it first visits Ireland in autumn, it feeds on the lush supply of berries available, but later in the winter will feed on invertebrates, in particular earthworms.

Will you come across a fieldfare this week in your community?

If you don’t observe one in the coming weeks, you will have to wait until next October.

If you come across a wildlife species that you would like help identifying I would be happy to help, contact me at bogs@ipcc.ie.