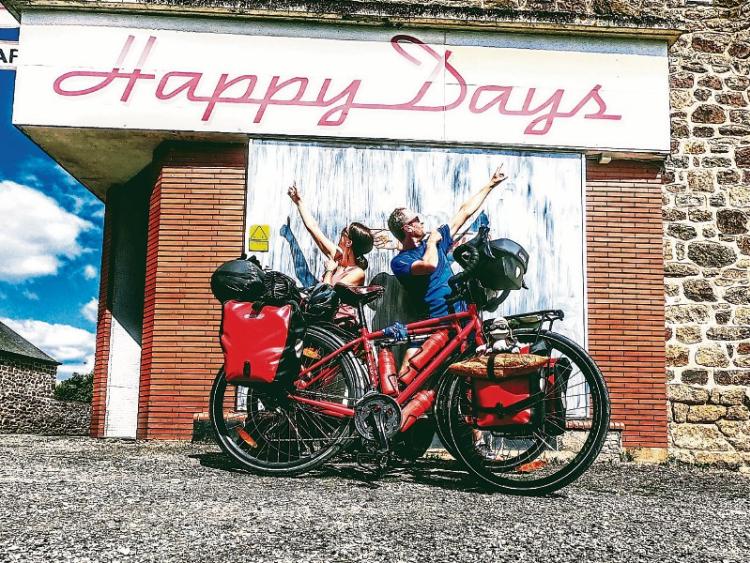 You could call this a cycle with a difference and then some. Mosquitoes, thunderstorms, spiritual Italians and lunatic Croatian drivers are just some of the more interesting encounters experienced by Naas couple Colm Larkin and Samantha Paton as they self propel themselves across Europe and, maybe, into Asia.

One day Colm put a proposal to her.

“We always loved to travel, ever since we met 14 years ago we always talked about seeing the world. One day I said to Sam ‘do you want to cycle around it?’ thinking she would laugh but she lit up with excitement.”

The pair began saving their money, as much as they could for two years.

They quit alcohol for six months, stopped going out for dinners and there were no new clothes or holidays.

“It was really tough at times but we knew at the end that it would be worth it,” said Colm.

They bought two Trek model bikes and they handed in their notice at their workplaces, but Covid-19 put them and everyone else into lockdown and temporarily scuppered their plans.

By this time they had rented out their home so they moved into the house owned by Colm’s parents, which was temporarily vacant.

They had to vacate the house and just as it looked as if they might have to find alternative accommodation, the lockdown lifted.

“We decided to go and got the ferry from Dublin to Cherbourg.”

Having landed in France, they cycled the whole way down the west coast following the EuroVelo route, out towards Bordeaux then over the Pyrenees Mountains and into Irun in Spain — a trip that took just over a month. And all of this was done by pedal power alone. The couple did not avail of trains, buses or taxis or any accommodation apart from their tent.

And they used a pocket rocket stove to cook food bought in Aldi or Lidl stores.

“We had planned to carry on cycling through Spain and into Portugal but the rise in coronavirus cases meant we had to change plans, so having cycled all of France, we got a train to Nice.”

They got lost every day cycling through France.

“We camped through four thunderstorms, which was scary to say the least so much so that we decided to get a hotel room for one night only — and then to find out we’d booked it 400 kilometres away.”

They got back on the bikes and endured a heatwave with temperatures of 37 degrees Celsius.

“Running out of water as we cycled through the Gascogne Regional Natural Park was the closest I got to passing out.”

From Nice they went to Monaco and into Italy roughly following the Po river “where we got eaten alive by mosquitoes day and night.

“We were bitten hundreds of times over the period in Italy. Apparently the rice fields in Piedmont attracted them. We would pitch our tent just to eat lunch away from the mosquito.”

Luckily, Colm escaped serious injury when he crashed into a bus stop at speed in Trieste, escaping with a minor foot injury.

On another occasion, late in the evening in Turin, the pair were trying to find somewhere to sleep because they couldn’t locate a place to camp.

So they knocked on the door of what they thought was a bed and breakfast place.

It actually turned out to be a private dwelling.

But they were taken in because the venue provides accommodation for pilgrims. “We had dinner with the family that night, it was a very spiritual house and the evening was special and memorable for us.”

They weren’t allowed to leave without breakfast the following morning and were given holy medals to safeguard them for the rest of their trip.

Later they visited a bar in a village for a cold drink when ten police officers arrived to raid the place, seeking identification from everyone present.

Sam and Colm were actually welcomed by the police chief, who suggested the best routes to take while his colleagues continued with the raid.

From there they visited Venice where tourism numbers were down by 95% and on to Slovenia and Croatia where they were nearly mown down by an ambulance and then a car.

As the weather deteriorated they got a ferry to Patras in Greece where they tested negative for Covid-19.

The pair’s risk of contracting the virus is extremely low.

“You won’t get a more effective form of social distancing than cycling and sleeping in a tent,” said Colm.

When the Greek authorities say it’s safe to do so Sam and Colm will tour the country and some of the islands. They intend to keep cycling all year and have no return date planned.

After Greece, they hope to cycle into Bulgaria and, possibly, Turkey.