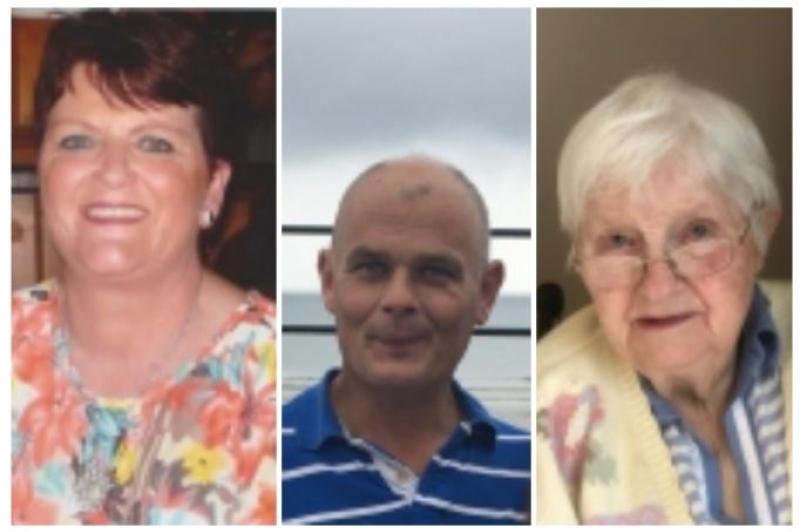 RIP to the late Patricia McKeon, Will Bermingham and Margaret Kelly

May Red Rest In Peace

Due to current government guidelines regarding public gatherings, a private family funeral will take place. Those who would have liked to attend the funeral, but due to current restrictions cannot, please feel free to leave a message in the condolence page below. Removal from Glennon's Funeral Home, 32 Main Street, Newbridge, on Wednesday morning to arrive at St. Brigid's Church, The Curragh Camp, for Requiem Mass at 11am . Burial afterwards in St. Conleth's Cemetery, Newbridge. Mass will be live streamed on the St. Brigid's Church, The Curragh, Facebook page.

The death has occurred of Margaret Kelly
St.John's, Castledermot, Kildare

Beloved daughter of the late Tom and Julia and sister of the late Andy and loving friend of the late Jack Sadly missed by her brothers Tom,Jimmy and Johnnie, sisters Ann and Delma, brother-in-law,sisters-in-law,nieces,nephews,grand-nieces,grand-nephews,relatives and friends.

MAY MARGARET REST IN PEACE.

Due to government advice regarding public gatherings a private funeral will take place for family and close friends. Reposing in Dunne's Funeral Home ,Mill Road, Castledermot on Monday from 5pm until 8pm with Removal on Tuesday morning at 10:30am to The Church Of The Assumption ,Castledermot for Requiem Mass at 11am.(max 50 people in church) Followed by Burial in Coltstown Cemetery.Those who would have liked to attend but due to current restrictions cannot please leave a personal message in the condolences section below. Margaret's funeral mass can be viewed at churchservices.tv

May Patricia Rest In Peace

Due to the current Covid-19 restrictions, there will be a family funeral on Tuesday at 1.30pm in Holy Trinity Church, Derrinturn, followed by burial in the adjoining cemetery. You can take part in Patricia's funeral Mass on the Carbury Parish webcam https://www.carburyparish.ie/our-parish/webcam-derrinturn/.

Condolences can be left on this page using the link below. You can line the route from Patricia's Home to Holy Trinity Church Derrinturn via Ticknevin Bridge and the Windmill Cross.

The family would like to Thank You for your support at this difficult time.

The death has occurred of Will (Willy) Bermingham
Newtown Village, Enfield, Meath / Kildare

May He Rest In Peace.

Those who would like to leave a message for Will's family, can do so in the Condolence section below.

The death has occurred of Michael Connolly
Cloncarlin, Monasterevin, Kildare

The death has occurred of Michael O'Neill
Stratmillan, Monasterevin, Kildare

Due to current government guidelines a private family funeral will take place for Michael. Requiem mass on Wednesday, 2nd June, in Ss Peter & Paul's Church, Monasterevin at 11.00 am. Mass can be viewed on http://www.monasterevinparish.ie. Interment afterwards in Lackagh cemetery. Those who would of liked to attend but cannot may pay their respects as the cortege leaves the church for Lackagh via Drogheda Row. Condolences may be left on the link below or send on in the traditional manner.