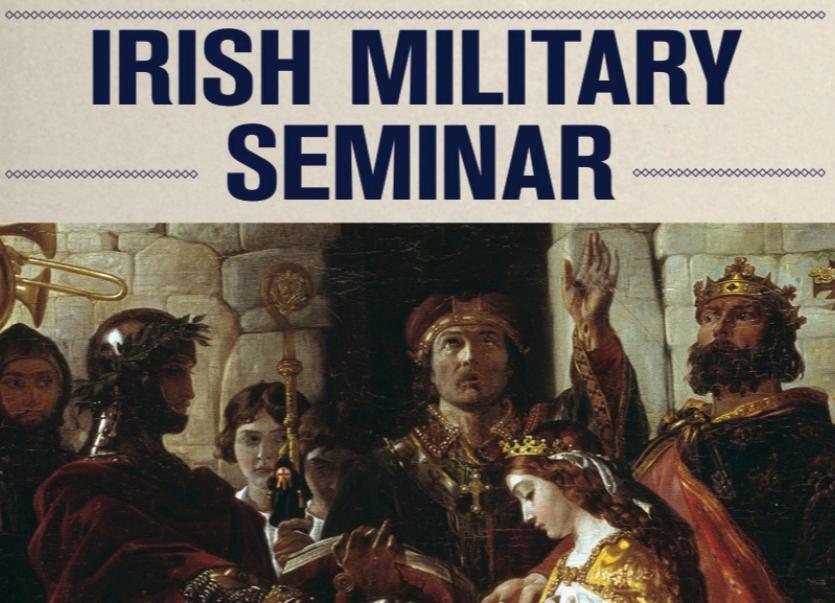 The second week of the annual Irish Military Seminar, which runs from 15-19 June features a stellar line up of historians speaking on topics ranging from the First World War to Strongbow.

Everyone is welcome to attend any or all of the online presentations; to register on Eventbrite.com, just follow the links provided at www.kildare.ie/ehistory or contact kildaredigitalhistory@gmail.com

The week begins on Tuesday, 15 June, with the premiere on both YouTube and Facebook (Kildare Decade of Commemorations), of a pre-recorded interview at 19.30 with Dr. Barbara Walsh, author of Irish Servicewomen in the Great War: From Western Front to the Roaring Twenties, and Margaret Scott, Kildare author. They talk about the young women from every province of Ireland who served both at home and on the Western Front in the Women’s Army Auxiliary Corps (WAAC). Drawn from all over Ireland and every class, creed, and family background, they worked as office workers, cooks, caterers, motor transport drivers, and in cryptanalysis and hi-tech telecommunications.

The World War I theme continues on Thursday, 17 June with the launch of Remembrance: The World War I Dead of Co. Kildare at 19.30 by Cllr. Mark Stafford, Cathaoirleach of Kildare County Council. This beautifully illustrated new publication contains the names and biographical details of over 750 servicemen and some non-combatants who were born or lived in Co. Kildare, and who lost their lives as a result of the First World War. The launch will be followed by a short presentation on the Irish participation in the war by Ronan McGreevy, journalist (The Irish Times) and author of Wherever the Firing Line Extends: Ireland and the Western Front.

On Friday night, 18 June at 19.30, Noelle Grothier, an archivist at the Military Archives, will talk about the ‘Military Archives Oral History Collection’ which is digitally recording memory, oral history and tradition associated with the Defence Forces since its inception in 1922. The collection includes direct testimony from interviewees who had served in the Congo, Lebanon, Cyprus, Chad, and in other overseas missions as part of the United Nations mission. Interviews also documented the Defence Forces experience at home from the 1940s, including the Emergency (World War II), training, evolution and development of the Defence Forces in the 1950s, the border, the Air Corps, Naval Operations, ceremonial responsibilities, as well as multiple human and social stories associated with those experiences.

The cornerstone of the Irish Military Seminar each year is the one-day series of lectures that usually takes place in Riverbank Arts Centre, Newbridge. Because of the ongoing pandemic related restrictions, this event moves online this year with three presentations on Saturday morning, 19th June. It features three historians of the highest caliber. Dr Conor Kostick, author and lecturer at Trinity College, will speak about ‘Strongbow and the Normans’ at 10.00 am. The coming of the Normans to Ireland from 1169 is a pivotal moment in our country’s history, and with its colourful personalities and sharp political twists and turns, Strongbow’s story is a fascinating one.

At 11.00 am Dr Aoife Bhreatnach’s topic is ‘Rows and Ructions: military-civilian violence in Irish garrison towns’ which will be of particular interest to Kildare people. She will explore how life in nineteenth- and twentieth-century Ireland was shaped by the thousands of soldiers who lived in the giant barracks that were built from the early 1800s onwards in so many of our towns. Aoife blogs on military barracks and the towns around them on http://irishgarrisontowns.com. She is also author of Becoming Conspicuous: Irish Travellers, Society and the State, 1922-70.

The final presentation takes us back one hundred years as we join Lorcan Collins for ‘Guerrilla Warfare During The War of Independence’ at 12.00pm. Lorcan is the founder of the renowned 1916 Walking Tour of Dublin. He conceived the 16 Lives series and wrote the first book in the series, a biography of James Connolly. His other books Ireland’s War of Independence 1919-21 - The IRA’s Guerrilla Campaign. Lorcan is also host of the Revolutionary Ireland podcast.

The organisers hope that you can join them for some or all of the above events in our programme. Please keep an eye out on social media for further details.

The Irish Military Seminar is part of the County Kildare Decade of Commemorations programme, supported by Kildare County Council and the Department of Tourism, Culture, Arts, Gaeltacht, Sport and Media (under the Decade of Centenaries 2012-23 Initiative). Thanks are also due to JuneFest 2021, the County Kildare Federation of Local History Groups and the National Gallery of Ireland.