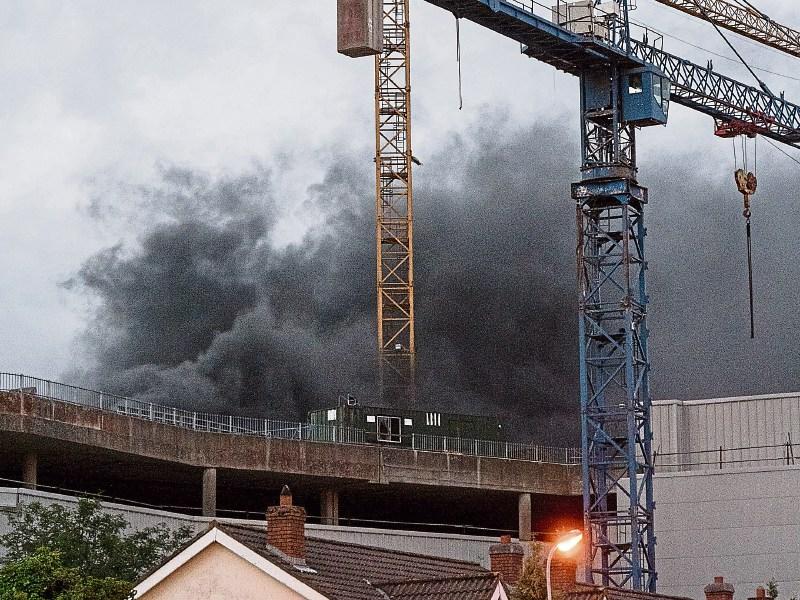 Smoke rising from a fire at the building in 2017. All of the fire damage has been repaired.

Plans for the new shopping centre in Naas are almost finalised and it’s expected that a planning application will be with Kildare County Council shortly.

This application will see a development which will differ considerably from the original project, which was due to be completed  over a decade ago but was never finished.

It is understood that plans for the new centre will be lodged with Kildare County Council by the end of summer.

A total of 575 car park spaces are envisaged, less than the 750 provided for in the previous planning application but enough to compensate for the loss of town centre spaces.

As already reported  in the Leinster Leader, the proprietors of the Monread bar and lounge are planning a new gastropub at the former Five Lamps building and this could open as early as August.

It is also understood that the Roche Group, the new owners of the shopping centre building, plan to reopen the Forge Inn. But it’s not yet known what type of enterprise it will house.

Meanwhile all of the damage caused by fires in the centre, before it was offloaded by a NAMA-appointed receiver, has been repaired. All of the internal debris has also been removed and the lift shafts have been cleared. The entire building has been weatherproofed.

It is understood that the owners are in negotiation with two anchor tenants but these have not been identified.

Dunnes Stores was originally touted as the original anchor tenant but this arrangement was never concluded.

As already reported the new development will have a strong healthcare element and it is thought that the upper floor will be devoted to healthcare, office space and education use.