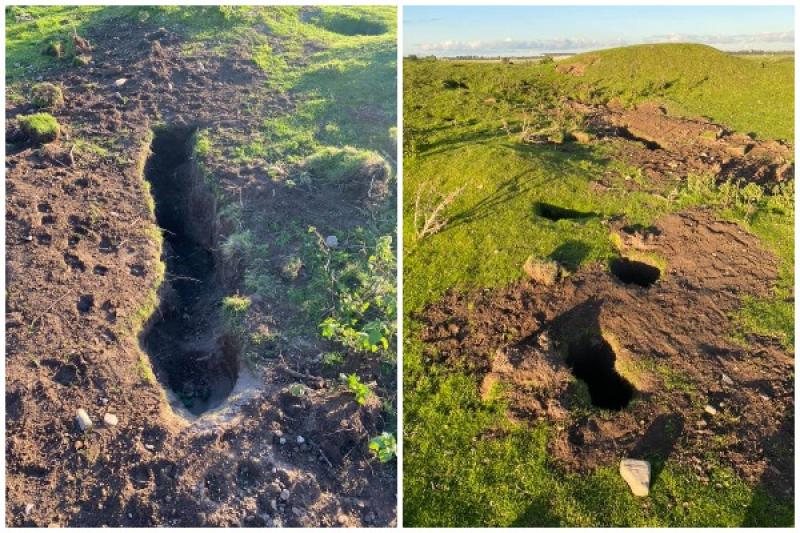 The damage caused to the Gibbet Rath monument. PHOTOS: Protect The Curragh Plains/Facebook

Anti social behavior on the Curragh Plains is further proof that the area should be designated a national park, according to Independent TD Cathal Berry.

The Facebook page known as Protect The Curragh Plains posted photographs displaying a number of holes near the Gibbet Rath monument, which marks the 1798 battle.

Deputy Berry visited the area on Monday and inspected the damage that was caused.

He said: "Having walked the ground myself, the damage caused is further evidence (if any more were needed), of the requirement to designate the Curragh Plains a National Park and to have it managed by a state agency
like the OPW who have the appropriate expertise and experience."

Some people have suggested that the holes may be the work of people with metal detectors looking for historical treasures in the area, or that "glamping" may have been taking place there.

Fianna Faíl Senator Fiona O'Loughlin called for the incident to be investigated by local gardaí.

She told the Leader: "We need to ensure that we are protecting our historical sights and preserving them for the next generation."

"If we allow this type of vandalism to go unchecked then we will be left with nothing."

"We need the perpetrators to be found and sanctioned."

Under current laws, to use a metal detection device for the purpose of searching for archaeological objects anywhere within the state is illegal and can lead to €63,486 fine and/or up to 3 months imprisonment.

The Gibbet Rath monument commemorates the execution of several hundred rebels by British forces during the Irish Rebellion of 1798 at the Curragh of Kildare on May 29 1798.

It is estimated that around 350 rebels were murdered by British soldiers at the site.