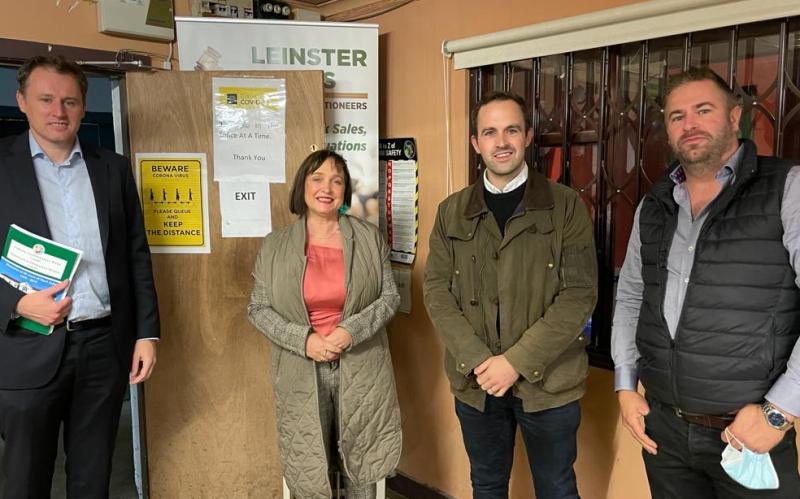 A Kildare Senator has praised a recent farmer's mart that took place in Kilcullen, but has expressed concerns over the latest news concerning funding for the Common Agricultural Policy (CAP) Strategic Plan.

It follows after an announcement from this morning by Minister for Agriculture, Food and the Marine, Charlie McConalogue TD, who revealed that the Irish Government has agreed an exchequer contribution of €2.30 billion for the CAP Strategic Plan 2023-2027.

This brings total funding for the plan to €9.8 billion.

She described the meeting as "constructive, open and informative."

Senator O’Loughlin elaborated: "I attended and contributed to the CAP meeting at Kilcullen mart yesterday evening, and it was a long but constructive engagement."

"It was clear for the quality of the contributions and the level of expertise on show, that Kildare is home to some of the highest quality farmers and agri-food businesses in the country."

"I am also concerned about the impact of convergence and the 25 per cent eco-scheme on Kildare farmers."

Senator O' Loughlin continued: "It is vital that we support or farmers; We need to ensure that farmers are adequately supported.

"I want to thank and commend all those who attended last night’s meeting, and to thank the Minister for being so generous with his time.

"Farmers are ready to step up to the plate, and are ready to be part of the transformation to a clean economy, but they need the support and certainty of a CAP that is fit for purpose," she concluded.

Speaking on Minister McConalogue's announcement, Senator O' Loughlin explained that while it "shows the Government’s continuing commitment to farmers, to rural areas and to the rural economy", she is still "very cognisant of the views of local farmers in Kildare."

She continued: "We must ensure that access to the CAP funding is simple, straightforward and streamlined; it is imperative that farmers are supported, ensuring security and quality of food supply nationally and for export purposes."

Commenting on the CAP announcement, Fianna Fáil leader and An Taoiseach Michéal Martin said: "The investment of €2.3 billion of national funding in Rural Development measures over the 2023-2027 period emphatically demonstrates the Government’s continuing commitment to farmers, to rural areas and to the rural economy."

"It also demonstrates my own, and this Government’s, determination to follow through on commitments made in the Programme for Government, for example in relation to the allocation of carbon tax funding to a flagship agri-environment and climate measure to encourage farmers to farm in a greener and more sustainable way, and in relation to the alignment of Ireland’s organic farming area with the current EU average."

He added: "It is an enormous vote of confidence in the sector’s ability to meet the considerable challenges it faces, and to secure an economically, socially and environmentally sustainable future, for farming families and for society more widely."