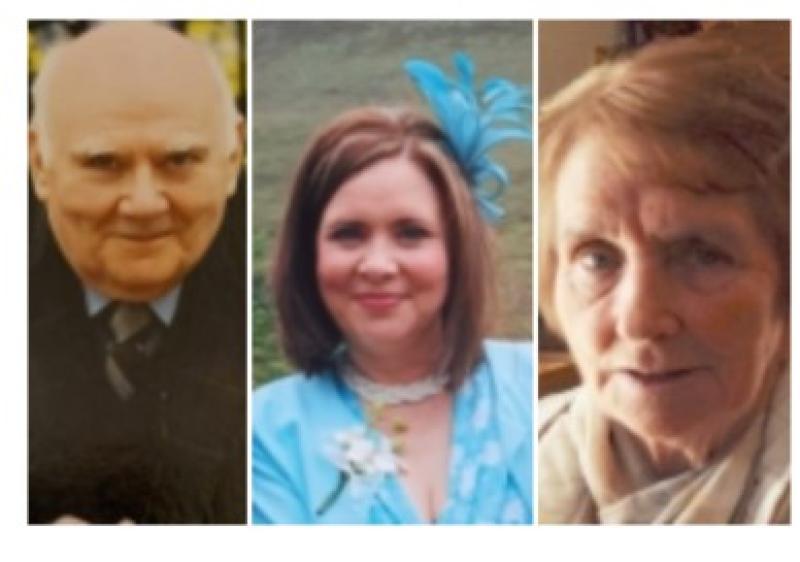 The death has occurred of John BRAZIL
Newbridge, Kildare

Reposing at Fanagan's Funeral Home, Aungier Street, on Wednesday from 3pm until 5pm. Funeral Mass on Thursday at 10am in The Church of Our Lady of Mount Carmel, Whitefriar Street, followed by burial at Glasnevin Cemetery. The Mass may be viewed on www.whitefriarstreetchurch.ie.

Reposing at Murphy's Funeral Home, The Avenue, Gorey, on Wednesday 27th October from 6 p.m. until 7.30 p.m.

Owing to the HSE and Government Regulations Social distance rules will apply in the Funeral Home and Crematorium. Please wear masks.

The family very much appreciate your support and co-operation during this very sad and difficult time and would be grateful if you would express your messages of sympathy on the Condolence link below this notice.

May Annette rest in peace.

Reposing at her residence in Tristernagh on Tuesday from 5pm until 8pm. Funeral Mass on Wednesday at 11 o'clock in Ballynacargy Church (in line with Covid 19 guidelines). Burial afterwards in Sonna cemetery.

Those wishing to leave a message of condolence to her family may do so in the Condolence Book section below.

May Lily Rest in Peace

John Kenna Main Street, Monasterevin County Kildare died on 24th October 2021 peacefully at his home surrounded by his loving family. A devoted husband to the late Helen, father to Noel, P.J. and Jacinta and their spouses Nollaig, Ann and Ciprian, adored grandfather to Jack, Rory, Holly, Sally, Sophie, Craoi and John. Sadly missed by his cousins, brothers-in-law, sisters-in-law, his many nieces, nephews and his wide family circle, his companions and his life long friends, his loving carers and his many loyal customers, serving his community for over 70 years.

Reposing at his residence on Tuesday from 2pm till 8pm (please wear face coverings and adhere to Social Distancing guidelines). Removal on Wednesday at 10:30am arriving St Peter and Paul's Church Monasterevin for Requiem Mass at 11am. Funeral afterwards to St Evin's Cemetery Monasterevin.

You can leave your condolences on the online Condolence Book below.

The family would like to thank you for your help and understanding at this sad and difficult time.

John's Requiem Mass will be streamed live on

Man arrested after pedestrian and parked cars struck by car