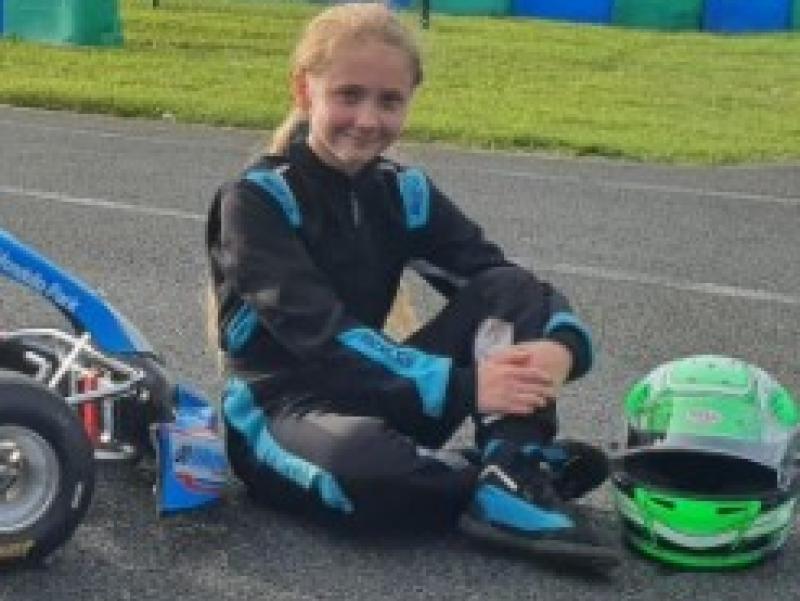 Unlike the mind-numbing traffic that often plagues her hometown, one Newbridge girl aims to go fast and furious in her pursuit to be a motor champion.

Lily Rose Hughes, a ten year old girl who is in 4th class at Patrician Primary School in Newbridge, has already made an impact to the Motorsport Ireland (MI) paddock in her first season racing Karts.

This season, Lily Rose is the only female driver on the Cadet grid competing from Southern Ireland.

Over the course of the season, Lily Rose has travelled throughout Ireland competing in various competitions.

Lily Rose’s first MI race took place in Kiltorcan back in July, and in her second MI round at Athboy in County Meath, Lily Rose started to make her presence felt, eventually moving up the grid to a mid-field finish.

She once more brought home a mid-field finish during her third MI round at Whiteriver in County Louth.

Plans for former Kilcullen shop to be converted into five apartments

In Lily Rose’s fourth MI round, at Pallas Karting in Tynagh, County Galway, she fought through the pack to finish just off the podium.

Following this, back in September, Lily Rose joined "The Formula Female" Team to take part in the Tillotson T4 World Cup taking place in Whiteriver, Co Meath, where this event served as her first opportunity to drive the Tillotson four-stroke engine.

She eventually managed to nab a top ten finish.

Lily Rose also enjoyed success during her fifth round, once more bringing it home from Athboy, and later this month, she will be entering into yet another round when she returns to her favourite track in Whiteriver.

The talented young driver told the Leinster Leader that she would like to thank everyone who has supported her in her first season both coaching, engine and media support; with a special acknowledgement to the amazing friends of all ages she had made both on and off the track.

With Karting now very much coursing through her veins, she also revealed that her thoughts are already on next season: Lily Rose will advance to the MI Rookie Cadet championship with an eye on the podium.

She added that she will once again compete in the Tillotson T4 World Cup and perhaps also in some of IAME European Championship rounds!

Lily Rose's father, Ken, also chimed in on his daughter's motivation and success: "Lily has always shown a love for speed; I knew she had to move from Motocross once she started talking about going racing."

"In 12 months Lily has shown so much natural driver ability, she has progressed from not being able to reach the pedals to standing on the podium in the Irish Championship."

He added that Lily has been lucky enough to get some great advice at the track, her coaches were shocked at how quickly she applied it and how quickly her lap times fell.

"I’m so proud to have been able to watch Lily move from being a fast driver to a racer who understands the track and has developed her race craft.

"It blows me away to see the following Lily has developed at the track and this is not only down to her driving ability but also her amazing personality.

"I’m so excited to see how far she can go in Karts, I know she has aspirations of single seaters in the UK and Europe.

Mr Hughes concluded: "Thanks to everyone who has helped her and continues to support her as she moves into her second season racing."