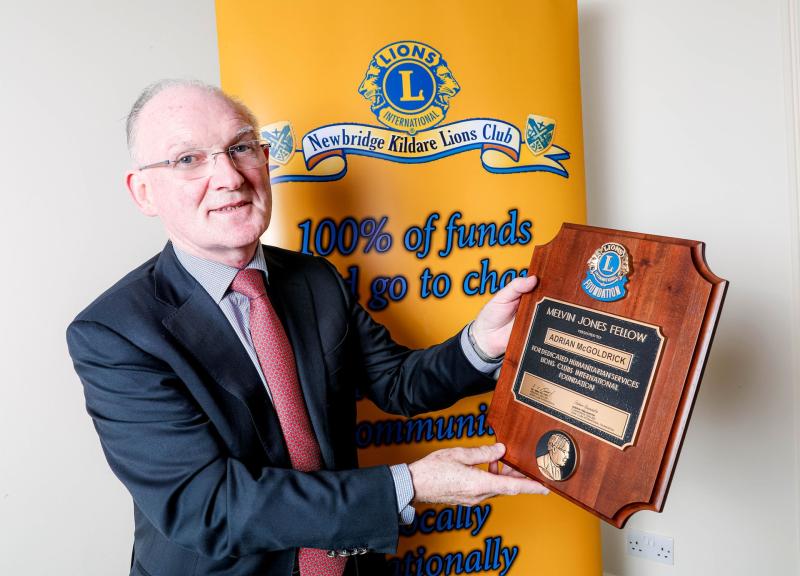 Dr Adrian McGoldrick received the Melvin Jones Fellowship, which is an International Award that recognises the humanitarian services provided by the Adrian throughout the years, in addition to his dedicated service as a Lion Member.

The Rathangan native is also the club's longest-serving member, having joined in 1985, and was also the NKLC's President for 1999-2000.

Speaking on Dr McGoldrick's award, NKLC said in a statement: "As Lions, we seek to honour Adrian as a Doctor for all the selfless care he has given to the community over so many years, and  in particular during Covid 19 pandemic."

"We know that this placed enormous strain on Adrian and his fellow Health Care workers, Doctors and Nurses."

It added that the virus intruded on its plans to honour Adrian: "We had hoped to surprise him on the day, he actually retired, but missed that opportunity, since then we had hoped to have a full club turnout, but unfortunately again the restrictions intrude."

"There are many Lions, past and present, together with friends and supporters of NKLC who join with us in recognising and honouring Adrian."

Dr McGoldrick told the Leinster Leader the reason why he decided to retire: "I retired from practice last June as I had had Covid Myocarditis the previous Summer; plus further back surgery, and (I) felt it was time to get out at 68."

Commenting on the work of his fellow frontline workers in the midst of the pandemic, he said: "I have the most amazing respect for my colleagues on the frontline, particularly in A&E and on the Covid Wards."

"I know that all of them including my GP colleagues are reaching burnout and cannot take much more: the pandemic is unprecedented -once in a lifetime."

He continued: "We need to do more to encourage those not vaccinated to do so and reassure them about any misgivings they have about the vaccine.

"All vaccines have potential risks but the data on this vaccine is very reassuring... also, they (the unvaccinated) are putting not just themselves at high risk of infection, but also the rest of the population."

When it comes to his favourite memories with NKLC, Dr McGoldrick explained: "There are so many... the Christmas Food Appeal is always good fun due to the time of year and the amazing goodwill of the people of Kildare/Newbridge."

With Nuala Madigan of the Irish Peatland Conservation Council

"We used to have the Strawberry Fair in the past and a charity auction but insurance concerns have stopped a lot of fund raising activities."

As for what changes he would like to see being made in NKLC going forward, he said: "In my time, I have seen women join the club which was a great move forward: we need to get younger members involved to guarantee the future of the club."

He also explained that he hasn't been involved very much in the club in recent years because of work commitments with the practice, in addition to his involvement with horse racing: "I am now looking forward to making up for lost time with the club and perhaps encourage some retired members to rejoin."

Fellow Lions member Rory DeBruir also weighed in on Dr McGoldrick's work being recognised: "Dr McGoldrick is a highly-respected member in both NKLC and the local community."

"He is a humble, kind man who harbours a considerable awareness about the needs of others; his bedside manner is great."

"He is everything that you would expect from a doctor."