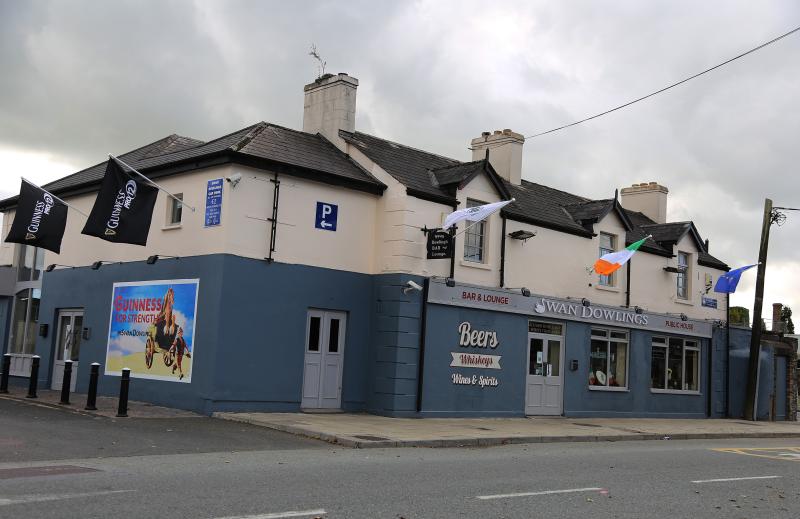 Swan Dowling's pub, Naas, was leased at the time

A former Sinn Féin election candidate and Naas publican had €15,000 worth of illegal drugs, it was claimed at  Naas Circuit Court today.

Martin Kelly, 46, whose address was given as 51, Hazelmere, Naas, had his case adjourned.

He pleaded guilty to possessing drugs for sale or supply at Newbridge Road, Naas, on September 3 2019.

Mr Kelly contested the 2011 General Election, running for a seat in Kildare North as Sinn Féin’s sole runner in that constituency. He received nearly 2,900 first preferences votes before being eliminated on the third count.

Detective Garda Louise Fleming told of observing the defendant acting suspiciously  near a pub - Swan Dowling’s - at Newbridge Road, Naas, shortly before 1pm on the date.

The defendant, who leased the premises, was carrying a red bag and looked anxiously around. He got into a Mercedes car.

Det Gda Fleming said he appeared to be deliberately delaying leaving and when the gardaí spoke to him he was nervous.

The gardaí found cocaine, cannabis and ecstasy in a metal tin inside the red bag and he admitted ownership of the drugs.

A warrant was secured before the pub was searched and they were given access to the area by two staff members.

The gardaí found MDMA, also known as ecstasy, cocaine and a number of lists.

In an office building benzocaine, a mixing agent, was discovered.

During a subsequent garda interview the defendant said he was going away for a brief break with his girlfriend. He denied selling the drugs and said they were for him and his girlfriend.

Referring to the discovery of money, he said this was for staff wages.

During a second interview he told gardaí “I want to get away from the shit and crap of it all.”

The defendant would not say who he was holding the drugs for because of fears for his family.

The court heard he stored the drugs because of his "fear of other people" and wasn’t making money from it.

He was contacted by these on a “burner phone”.

Referring to the list, he said this was a list of people who got drinks for Christmas and it wasn’t a “tick list.” He also denied selling drugs in the pub.

Senior counsel Damien Colgan told the court that a probation report indicated he was under financial pressure at the time and he had no previous convictions.

The court also heard that he spoke to the gardaí without the services of a solicitor and he denied every offer of legal assistance during interview.

The court further heard that had been working seven days a week and the pub is currently closed.

Mr Colgan said he is at a low risk of reoffending and has not come to adverse attention since the incident.

The court heard he supports his children and a number of people, including former employers, speak highly of him with one describing him as an excellent character.

Mr Colgan said his cooperation was second to none and the gardaí were aware he was dealing with dangerous people.

The court also heard that the defendant is a carer for his sister and the case was adjourned by Judge Mary O’Malley Costello for evidence about the care needs of his sister as well as evidence of a urinalysis test undertaken by the defendant.