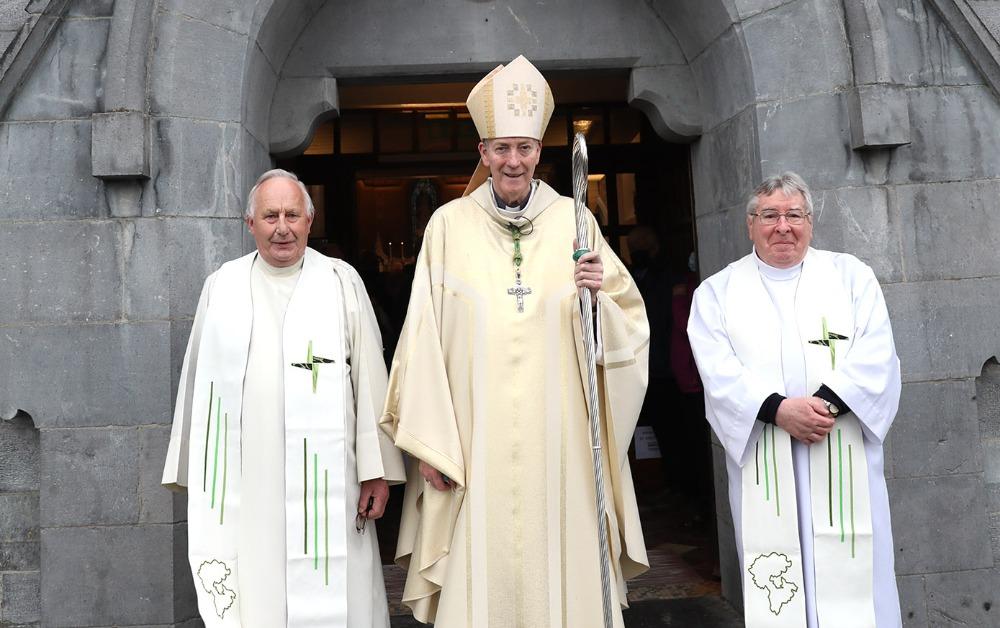 Bishop of Kildare and Leighlin, Denis Nulty concelebrated Mass in Allen on Easter Sunday to mark the 150th anniversary of the Church of the Holy Trinity.

Bishop Nulty was joined at the ceremony by Parish Priest Fr Willie Byrne and curate Fr Brian Kavanagh.
A large congregation attended the church for the occasion and refreshments were served afterwards in the neighbouring community hall.

According to local records, the first Mass was celebrated in the new church on Easter Sunday, 1872.
Local resident John Byrne, who is helping to organise the anniversary celebrations, said: “It all started off when a man next to me at Mass one day told me that the church would be 150 years old on Easter Sunday because his son was baptised on the 100th anniversary 50 years ago!”

He added: “This was news to a lot of people so the Parish Priest Fr Byrne set up a committee to work on the anniversary.”
John continued: “It’s a fine, imposing church and is familiar to a lot of people for its elevated location.”

The church was designed by John Sterling Butler — one of the foremost ecclesiastical architects of the time who was also responsible for other churches across the diocese such as in Broadford, Clogherinkoe, Mountrath and Emo.

The site for the church was donated by Sir Gerald George Aylmer who succeeded his father as 8th Baron of Donadea in 1816. The church was renovated in the 1920s and work was also carried out on the roof in the 1960s.

All photos by Aishling Conway.