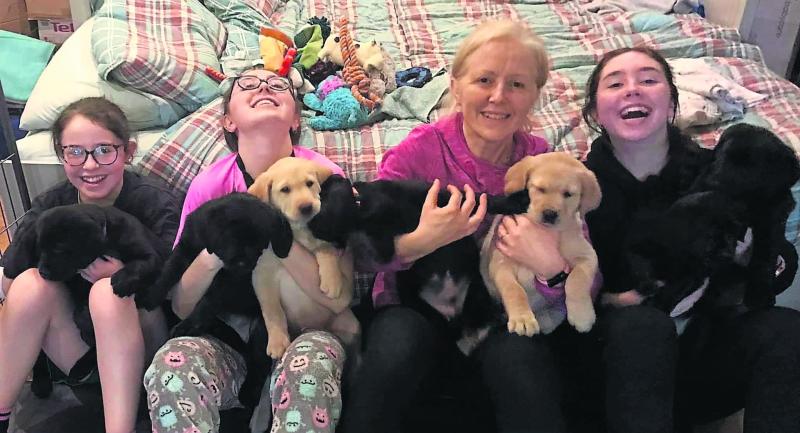 Back when the college commute consumed a good chunk of my time, there was a lady who got the bus with her guide dog every day.

Tucked in under her feet as she took her seat, the dog would pop up as soon as the lady’s stop approached. It was amazing how the dog knew when to alert her owner to alight from the bus. She never missed her stop, whether there were traffic delays or road work stoppages.

There is no doubting the intelligence of dogs, but these attributes are finely tuned by the top class training the dogs receive from the Irish Guide Dogs for the Blind (IGDB) at its Cork headquarters.

One of the crucial elements of the training is the puppy raising stage which occurs when the puppies are aged eight weeks to 12/14 months.

One such volunteer is Mags Armour from Newbridge. Her love of dogs prompted her to get involved with the organisation who supplies guide dogs for the blind and visually impaired, as well as assistance dogs to support families of children with autism.

“We had moved back from Scotland in 2014 and I wanted a dog. My friend was involved in puppy raising and that’s how I became interested,” she said.

“It is a huge commitment but there is a system in place. There is huge support and guidance for people. You’re not left on your own, you get training.”

Mags got further involved in the charity when she took up a job with the IGDB.

During this time, a dog called Ida had been selected and identified as a potential breeder. Her genetics, manner, and blood line all lead her to being suitable to give birth to potential guide and assistance dogs.

Covid-19 hit and Mags volunteered to take Ida. Brood stock holders were mainly based in Munster but Newbridge, with its excellent transport links and distance from Cork, was deemed a suitable location.

“Newbridge was as accessible, or as far as some areas in Cork and Kerry from Cork city,” explained Mags.

Now there are broods placed in Dublin and Donegal.

Ida’s last litter was fathered by an American stud dog. His sperm was frozen and transported over to guide dog reproductive specialists, Dr Sarah Mitchell in Clonmel. A procedure called Trans-cervical Insemination (TCI) was carried out on Ida. This is a method to deliver sperm directly into the uterus, by bypassing the cervix.

Mags pointed out the process is carried out in an ethically and financially viable way.

“When the puppies are born, there is a very structured programme. We start by gently exposing them, from three days old, to different sounds, very subtle tiny stresses such as rubbing a cotton bud over their paw or holding them in different positions and then returning them to their mother so they then recover and are nurtured.

“They also learn to walk on unstable ground by putting down a temporary board and getting them to walk over it. In that way they learn to adapt to stress and it makes them a bit more robust,” she said.

The puppies cannot circulate widely until they are fully vaccinated. The aim of puppy raising is also to build up their social skills.

Anyone who wants to volunteer as a puppy raiser, needs to be over 18, and there should be no children under 5 in the house as the puppy will require a great deal of committment. They also need access to an outdoor enclosed area for exercise, access to transport and public transport.

“The nice thing about raising a puppy is that you can bring them anywhere you go — the restaurant, the cinema, on holidays, a staycation. The puppy can go everywhere as long as it is appropriate, even shopping to Tesco or any other supermarket.

“It really is a lovely experience. They say it takes a village to raise a child and that’s true for guide dogs too. We also need volunteers to cover holidays for the puppy raisers. That is also vital.”

There are currently 70 puppies being raised in the Dublin, Kildare and Meath region at present.

Mags said the experience brings great joy to the family.

“It’s such an amazing experience and in a way it also gives you perspective, and you get so much from it. It has opened up our whole world,” added Mags.

The family are also in touch with other puppy raisers and have built up a great support network.

Guide Dog Day takes place tomorrow, Friday, May 27. If you would like to find out more, log on to www.guidedogs.ie and then click on ways to help, volunteering, and then puppy raising.