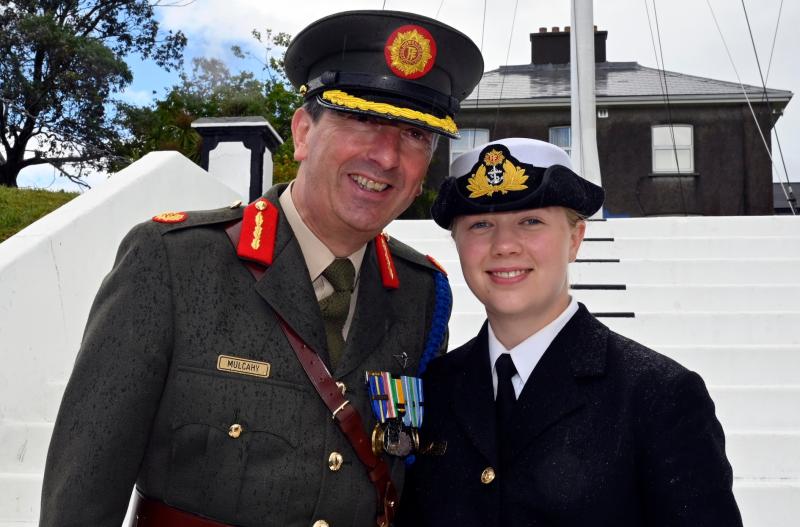 A young woman from Naas has become a commissioned officer in the Navy at a ceremony in Cork today.

Laoise Mulcahy is the daughter of the Assistant Chief of Staff, Brigadier General Rossa Mulcahy.

Raised in Naas, by her parents Rossa and Lorna with her sister Caoimhe, Laoise joined the Naval Service after completing secondary school in 2020, and will be third generation Defence Forces.

Laoise has always been keen on participating in sports, especially Camogie.

Laoise was involved in the Defence Forces women’s 5 aside tournament along with various other moments spent with class members throughout the cadetship.

The class also included natives of Cork, Meath and Tipperary.

The ceremony took place in Haulbowline Naval Base in Cork at 12pm and was attended by the  Minister for Foreign Affairs and Minister for Defence, Simon Coveney and the Defence Forces’ Chief of Staff Lieutenant General Seán Clancy.

It was a very important and proud day for the members of the 60th Naval Service Cadet Class as they were awarded their Commissions.

The four Cadets of the 60th Naval Cadet Class have successfully completed 22 months of intensive training preparing them to become Commissioned Officers.

They will continue their training and education to prepare them for qualification as Naval Watch keepers onboard Naval Service warships.

This specialised training will include Navigation, Ship Handling, Above Water Warfare and Gunnery, Seamanship, Communications, Leadership and Management.