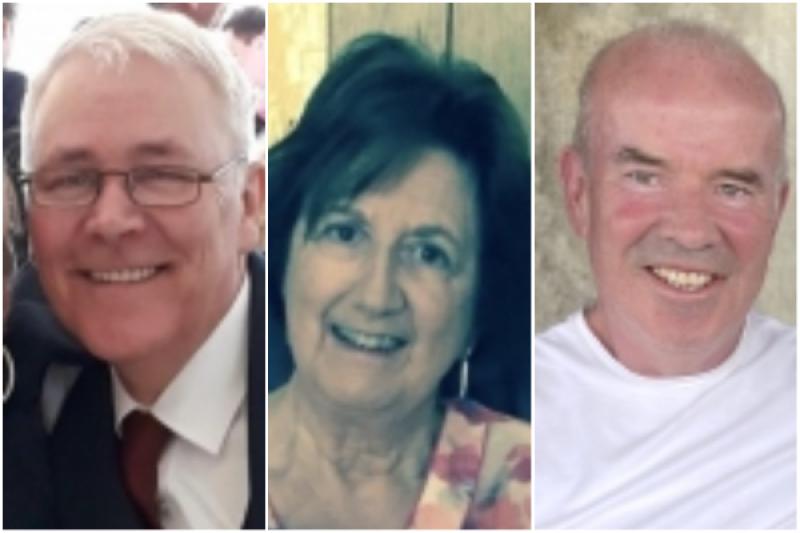 Reposing at Cunningham’s Funeral Home, Lucan on Tuesday evening (23rd August) between 6pm and 8pm. Removal on Wednesday morning (24th August) to The Church of Our Lady’s Nativity, Leixlip arriving for Requiem Mass at 11.00am followed by burial in Confey Cemetery, Leixlip.

Irene’s Funeral Mass may be viewed online by following the link below;

Formerly of 869 Piercetown, Newbridge, Co. Kildare. In the tender care of the staff of Mill Lane Manor Nursing Home, Naas.

Predeceased by her husband Patrick (Pe) and son Liam.

"May Mairéad Rest In Peace"

Reposing at The George Mullins Funeral Home, Kilcullen Road, Naas on Monday from 5pm to 7pm with prayers at 6.30pm. Removal on Tuesday morning at 9.20am to arrive at the Church of Our Lady and St. David, Naas for Funeral Mass at 10am followed by burial in St. Corban's Cemetery, Naas. The Mass will be streamed on www.naasparish.ie.

"May Billy Rest In Peace"

Reposing at George Mullins Funeral Home, Kilcullen Road, Naas on Tuesday from 4pm to 7pm with Prayers at 6.30pm. Removal on Wednesday morning at 10.20am to arrive at St. Brigid’s Church, Kill for Requiem Mass at 11am which will web-streamed on www.killparish.ie.

Funeral afterwards to Mount Jerome Crematorium with prayers in the Victorian Chapel at 1pm which will be streamed on https://www.mountjerome.ie/victorian-chapel-service/

Family flowers only please. Donations, if desired, to The Mater Foundation at www.materfoundation.ie and click the “DONATE” button.