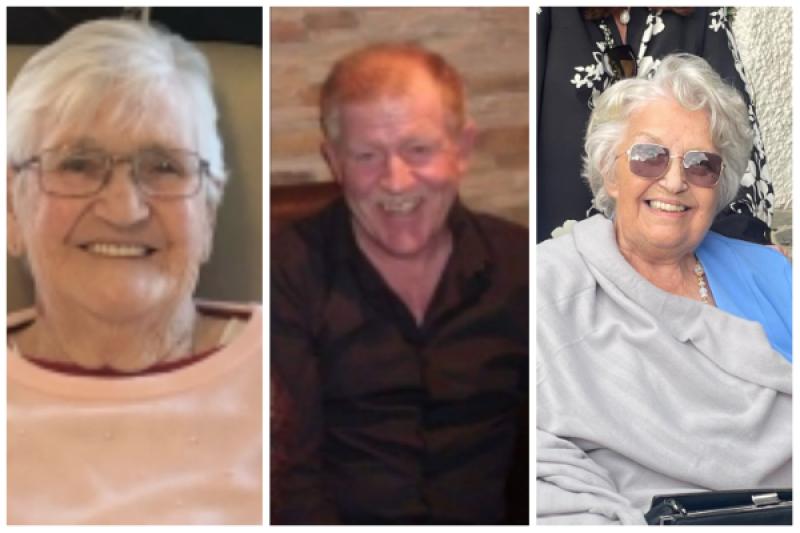 May Domo Rest In Peace

Reposing in Anderson & Leahy’s funeral home, Newbridge, on Sunday from 4pm with prayers at 7pm. Removal on Monday morning at 10.30am to arrive at St. Conleth’s Parish Church for 11am Mass. Domo’s Mass will be live streamed on https://www.newbridgeparish.ie/parish-church Funeral afterwards to Mount Jerome Crematorium. Which will be lived-streamed at 1.45pm on https://www.mountjerome.ie/victorian-chapel-service

May He Rest In The Loving Arms Of His Grandmother Anna R.I.P.

Mass of the Angels in the Church of the Irish Martyrs, Ballycane, on Monday at 11am, followed by cremation in Mount Jerome Crematorium. House private, please. Family flowers only. Donations, if desired, to The Friends of the Coombe or CHI Crumlin by clicking on the following links :

Reposing in Anderson & Leahy funeral home on Monday from 4pm with prayers at 7.30pm. Removal on Tuesday morning at 10.30 arriving to the Dominican College Church for 11am Mass, Evelyn’s Mass will be lived-streamed on www.dominicansnewbridge.ie. Funeral afterwards in Mount Jerome Crematorium for 1.45pm, which will be lived-streamed on https://www.mountjerome.ie/victorian-chapel-service

Reposing at Cunningham’s Funeral Home, Celbridge on Monday evening (September 19th) between 6 pm and 8 pm. Removal on Tuesday morning (September 20th) to St. Patrick’s Church, Celbridge arriving for Funeral Mass at 10 am followed by burial in Shanganagh Cemetery. Mary’s funeral service may be viewed online (live only) by following this LINK. Messages of sympathy and condolences for the family may be left by selecting “Condolences” below or alternatively at www.cunninghamsfunerals.com.

May Betty Rest In Peace