How to get there? The traffic plan from every part of the country for Punchestown 2022 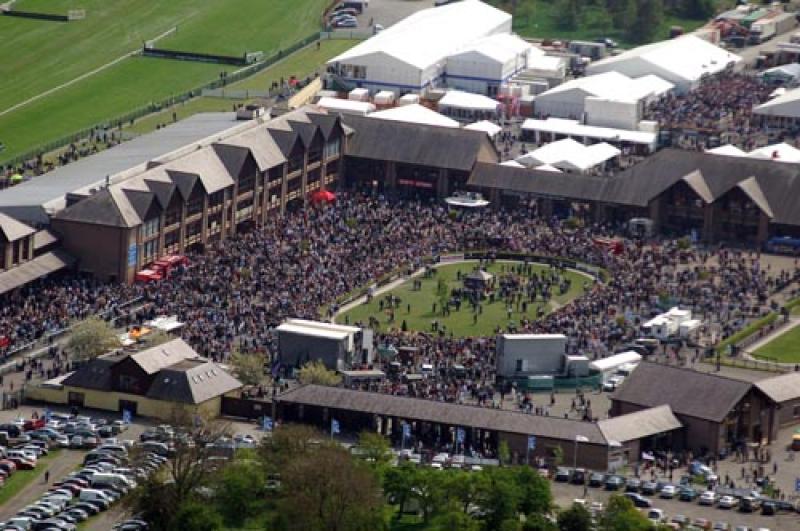 How to get there? The traffic plan from every part of the country for Punchestown 2022

Punchestown 2022 gets underway just outside Naas in Kildare on Tuesday, April 26, with thousands of racegoers expected to attend each day. Traffic will be busy and people are urged to use public transport where possible and to travel early.

Gardaí have released a comprehensive event traffic management plan for the week. See below the route you should take from wherever you're travelling from in the country.

Patrons are advised that delays may be encountered during peak traffic times due to the large attendance and are requested to allow sufficient time for your journey.

Gardai will be deployed to manage and regulate traffic in Naas and at the Event. At the Event site, patrons will be directed to the appropriate parking or set down areas. Patrons are requested to clearly display their car park permits to avoid any delay and ensure that they are directed to the correct parking area.

Routes to the venue will be clearly sign posted with directional and information signage. Priority junctions will be manned by Garda personnel.

All traffic attending will use the following routes:

1. Traffic from the M1, N2, N3 and N4 will travel via the M50 to the N7 (Dublin/Limerick Road). Traffic should take Exit 9 into Naas to the Blessington Road (R410) and on to Punchestown Racecourse.

2. Traffic travelling from South Dublin can travel via the N11, N81 (Tallaght / Blessington Rd) through Blessington (R410), or continue on the N81 southbound to Ballymore Eustace (R411) and the follow direction signage to Punchestown Racecourse.

3. Traffic from the South East (N9, N78, N80, and M9) can travel via the Carlow or Athy routes through Kilcullen and onto the Naas Road. At Mylerstown Cross (on the Naas to Kilcullen Road) traffic will turn right and onto (the L2023) to Punchestown Racecourse. Traffic travelling on towards Naas (on the M9) will take Exit 10 into Naas and will divert at Chadwick’s along the South Ring Road to the Ballymore Eustace road (R411) to Punchestown Racecourse. Prevailing traffic conditions on days that attract larger attendances may require a one-way system to operation on the roads approaching or exiting Punchestown.

4. Traffic from the South / South West can travel via the N8, N7, M7 turning off at Newbridge exit (Exit 11) to Kilcullen and travel as set out at No 3.

5. Traffic travelling from South East can travel via the N81 (Tullow / Blessington Rd) through Ballymore Eustace (R411) and the follow direction signage to Punchestown Racecourse.

All traffic entering the racecourse will do so via the following routes:

• Traffic from the R410 (Blessington Road) will turn at Beggars End Cross and proceed to Beggars End Gate where they will enter the Event Site and access appropriate car park.

• Traffic from the R411 (Ballymore Eustace Road) will turn at Watch House Cross and proceed to the Main Gate where they will enter the Event Site and access appropriate car parks.

• All horse boxes and horse transporters will be directed to the Main Gate where they will access the Event Site and stable block area.

• Shuttle Buses and Taxis will be directed to the Main Gate where they will access the Event Site, and proceed to the set down areas.

• Private Coaches shall approach the event site via the R410 (Blessington Road), to Beggars End Cross and proceed to Beggars End Gate to park in the Northern Enclosure allocated parking.

On Friday & Saturday Only

A one-way traffic system may operate through the peak periods immediately prior and after the event. This one-way system will operate under the direct control of Superintendent, An Garda Siochana, Naas Garda Station.

When the system is put into place before racing all traffic entering from both the Watch House Cross and the Beggars End Cross sides will drive in two lanes, under Garda control, to the respective gates where they will enter the Event site. All traffic EXITING the racecourse will be directed to the exit gate on the Ballymore Eustace Road. The one-way system will remain in force until peak traffic flows enter the event site.

Car and Bus Parking will be provided on site and is free of any charge. All Parking Areas will be designated and Sign Posted to aid patron’s entry and exit to / from the venue. Patrons are requested to note the area in which they have parked in order to assist in locating their vehicle after the Event.

Designated parking area will be provided for mobility impaired persons attending this Festival. Full details are available from the Event Promoter website at www.punchestown.com, or by phone at (045) 897704

Parking of vehicles will not be permitted on any of the approach routes to racecourse on the days of the event. Parking restrictions will be in place on all roads leading to the Event site. A Recovery / Towing service provider has been engaged by the Promoter and vehicles found breaching the restrictions will be towed away and towing charges will be incurred in such cases.

All taxis and shuttle coaches dropping off will be directed from their approach routes through either the Main Gate or Beggars End Gate onto the Main Avenue (or the adjacent Horse Box Avenue) where they can drop off fares at the pre designated area, and then must exit the area via the exit gate on the Ballymore Eustace road. Taxis will not be allowed further into the event site unless they are dropping disabled persons.

All taxis and shuttle coaches picking up must be on site at least 45 minutes prior to the last race and will be directed to the Main Gate (or the adjacent Horse Box Avenue) where they can pick up fares in the designated area and then must exit the area via the Ballymore Eustace gate.

Access to the site will be permitted only up to the introduction of the one-way traffic system.

A one-way traffic system will operate as required for the event for all buses and minibuses only. All such vehicles will arrive at Punchestown via the Blessington Road / Beggars End route (R410) and will exit via the Ballymore Road / Watch House Cross route (R411).

Residential access to some areas around the Punchestown area will be affected at certain times during and post racing. Traffic will not be permitted to travel from Mullacash Cross to Watch House Cross after the races, when traffic is exiting the Event Site. Traffic will be diverted via Killashee towards Naas Town until stand down has been given.

A transport partner has been appointed by the Promoter for the duration of Punchestown Festival. Their service will supply coach transfers and private coach hire from Dublin city centre.

Further directions to the Event and details on public transport are available from the Punchestown website HERE.

A shuttle bus service has also been engaged by the promoter for pedestrians and patrons wishing to travelling from Naas to this Event and returning to Naas afterwards. This shuttle service will operate each day prior to and after the Event. At the end of racing each day a designated collection point is assigned at the Main Car Park to deal with all taxis and shuttle buses. This bus service will operate from Poplar Square, Naas from 12.45pm daily. The buses will be easily identifiable and will be Subject to a Charge.

Patrons travelling from Naas are advised to make full use of these services in order to reduce any risk to themselves and other motorists at the event, and to maximise traffic flow from the Event Site.