Kildare and Kerry, respect and rivalry since 1903

Rivals down the years meet once again this Sunday 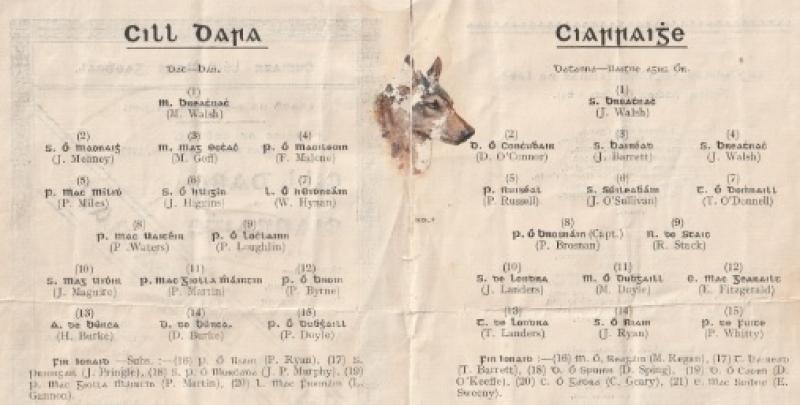 Followers of Gaelic games will know that Kerry were deprived of winning five All-Irelands in-a-row by the famous Seamus Darby goal in 1982. Their four wins (1978-81) was the Kingdom’s second such achievement, but the county had previously won four successive titles from 1929 to 1932.

A defeat to Dublin’s Young Irelands in the 1892 final prefaced a lean period for Kerry football in the late 19th century. By 1903 the tide had turned, so the 1903 All-Ireland football championship, won by Kerry, has a very special place in the 135-year history of the GAA.

Kildare met Kerry three times to win the All-Ireland Home final and beat London in the final proper; but the Home final was always considered to be ‘the real final’. And that 1903 win was the first of Kerry’s record 37 titles. By 1914, Kerry had won five All-Irelands and their sixth win was in 1924.

En route to the 1903 final it took Kildare three games to defeat Kilkenny in the Leinster final, but Kildare turned the tables on the Kingdom in the 1905 final which was played in Thurles on 16 June 1907 winning by 1-7 to 0-5.

Eoghan Corry records in his Kildare GAA – A Centenary History that Kerry player Dick Fitzgerald, wrote: “Football took a turn for the better about this period … mainly due to the memorable meetings of Kerry and Kildare”, adding that, “To Kilkenny also must go a share of the credit, for their battles with Kildare had also helped to do in Leinster what Kerry and Kildare did later for Ireland.”

The Kerry-Kildare rivalry was rekindled from 1926 to 1931 when Kildare, six-in-a-row Leinster champions in those years, won only one of four finals against Kerry, that of 1927. In a reflection of the 1903 trilogy, the ’26 final went to a replay. In all, the teams met nine times in six finals over 27 years (1905-’31) resulting in four Kerry victories, two wins for Kildare and three replays.

You might ask why there was a replay after the first 1903 game which ended 1-4 to 1-3 to Kerry. Corry records that

“With two minutes to go, Kildare led by 1-3 to 0-4 when the Kildare goalkeeper was adjudged to have gone over the line when he stopped a shot from Dick Fitzgerald. When the umpire raised the flag, some of the crowd invaded the pitch. The referee could not clear the pitch for the final two minutes, so he awarded the match to Kerry”.

Central Council decided that the match should be replayed at the same venue a month later resulting in a draw and a second replay followed – after much disagreement about where the match would be played, until Kildare accepted Thurles as the venue.

The Kerry-Kildare rivalry, the regard in which the teams were held, and the quality of play attracted ever increasing crowds to the games.

Paul Doyle (Maddenstown) who made his debut on the winning team in the 1919 final played in six of those games. He scored all five Kildare points in the ’29 final and is one of only two Kildare men to win three Celtic crosses. The other is Mick Buckley of Caragh who played at No. 6 in the 1919 final and in the full-back position in 1926, in ’27 as captain, and ’28.

Jack Higgins from Naas, Paddy Martin (Ellistown) and Matt Goff (Leixlip and McGee Barracks) were the only three to play in all seven matches.

Caragh’s Frank Malone had six matches, ending in 1931, while Jack Hayes (Kildare) played in five finals (1926-’29). As well as being the first Sam Maguire winning captain, Bill ‘Squires’ Gannon took the field in all five matches up to 1929. Joe Curtis (Naas) went into action in the 1928 final with broken ribs: “he was strapped up, given a shot of whiskey, and sent out to play.” He also saw action in the 1926 and ’27 finals.

Dermot Bourke from Carbury, in whose honour the county senior cup is named, occupied the No. 14 position in the 1931 final, and, like many of his colleagues, played for Leinster in the same year.  Bill Mangan from Kildare town was on the 1927, ’28 and ’35 teams. Martin Walshe, also from Kildare, was goalkeeper on both All-Ireland winning teams, and was on the 1931 team. Gus Fitzpatrick (Naas) played at left full-back in 1927, ’28 and ’29.

Larry Stanley from Caragh played in both finals in 1926 but missed out on the ’27 and ’28 wins as he was, according to the Kildare Observer, “concentrating on athletics”. He had already captained the Lilies to victory in the 1919 All-Ireland final and won a second All-Ireland with Dublin in 1923 playing alongside several of the team that lined out for the Dubs in the fateful Bloody Sunday match against Tipperary on 21 November 1920, refereed by Clane-born Mick Sammon. In 1924, Stanley represented Ireland in the high jump at the Olympic Games in Paris, and in the Tailteann Games in Croke Park. He also played soccer in the colours of Belfast Celtic - and thereby hangs another tale!

It is notable that only two substitutes were used over the seven games: Pat ‘Darkie’ Ryan from Milltown came on in the ’27 final, as did J Dalton in 1935.

Kerry Legends in a Golden Era

Long before GAA All Stars and Player of the Year accolades, the Kerry four-in-a-row team set the standard for all aspiring footballers in the Kingdom. And they made their mark on the national psyche in more ways than on the playing field.

Con Brosnan (Newtownsandes Club) was a member of the famous 1929-32 team and had already won All-Irelands in 1924 and in the ’26 replay against Kildare. As an Irish army captain, he was a key figure in bringing together Kerry players who were on opposite sides in the Civil War at a time when the county was still one of divided loyalties.

In the aftermath of the Civil War, “Kerry was among the most deeply scarred of counties”. County footballers were on opposite sides of a bitter divide and many people believed that some Kerry players would never line out together again due to their respective allegiances during the revolutionary period.

“In 1924, however, a remarkable match between pro- and anti-treaty players was organised to select a team to represent the county”. Con Brosnan got safe passage guarantees for Republican players like John Joe Sheehy and Barrett to play games, and together they used football to help heal the wounds.

Joe Barrett from the Austin Stacks club won six All-Irelands, two as captain in 1929 and 1932 having lined out for his county in the early 1920s.

Jack Walsh from Asdee won six All-Irelands in the same years as Con Brosnan. He won county championships with Shannon Rangers in 1942 and 1945. In 1915, Asdee named a new pitch in his honour. Micko Doyle and John Joe Landers were also on the 1929-32 teams.

Paul Russell was another famous Kerryman. As a Garda, he was stationed in eight counties and played legally with a club in each of those counties. When he finished playing, he wrote a weekly column for the Sunday Review, and he also penned articles for the Kerryman. He had some great duels with Paul Doyle in the Kerry v Kildare 1926-1931 rivalry. Kerry’s four-in-a-row depended on Russell keeping Doyle, Kildare’s most dangerous forward, to a minimum of points. It went into folklore as the Battle of the Two Pauls as described by the late Paddy Kiely from Woodlawn:

And wherever Doyle (Kildare) did roam,

His star was always clouded,

By the boy (Russell) from Beauty’s Home.

This Sunday's meeting between Kildare and Kierry in the Allianz Football League, Division 1, opening game of 2022 is one of the most anticipated matches between the counties since the 1998 All-Ireland semi-final won by Kildare, 0-13 to 1-9.

What of the future?

Will this League match, with the return of Jack O’Connor to Newbridge or Nowhere, herald another era of Kerry-Kildare rivalry, and how will the teams fare in the 2022 championship?