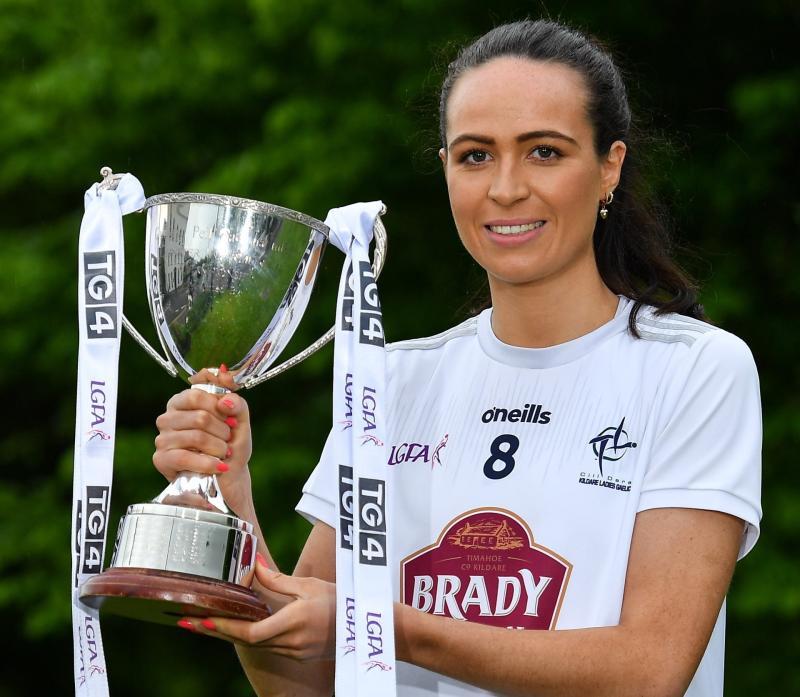 Kildare captain Grace Clifford says winning the 2015 TG4 Leinster Intermediate Final is still her proudest achievement for the Lilywhites as she finally looks to back that up.
Kildare clash with Wexford in this Sunday’s provincial decider and after missing out on the 2016 All-Ireland success through injury, the 27-year-old Eadestown star is desperate for silverware.
Sean Finnegan’s side were 5-14 to 3-6 winners against reigning Lidl NFL Division 4 champions, Offaly, last weekend but face a step up in class against the beaten Division 3 finalists.
Midfielder Clifford will look to channel some of the belief that helped her claim back-to-back county titles with her club in recent years, and finally regain that coveted Leinster prize.
“I was the glorified watergirl for the Leinster final and the All-Ireland in 2016,” said Clifford.
“I am still delighted that I stayed part of the panel. There might have been an easier route to say: ‘I will step away’, but just from the motivation side of things I wanted to stay involved.
“We had a lot of retirements after winning the All-Ireland. A lot of girls who were great servants to Kildare. They did their time and in fairness they had given everything, so they finished up.
“There was a lot of young people on the panel who hadn’t had a lot of experience. The likes of Hazel McLoughlin from Eadestown, she is so young but she has a good head on her shoulders and that’s from the experience in those big club games, she is able to translate that on the field with Kildare.
“Last year there was four of us from Eadestown were involved. Gráinne Kenneally and Siobhan O’Sullivan are in the army and are gone abroad for this season.
“But definitely you get a taste for that winning mentality and silverware. You just want to experience that in all you play. That’s what really has been the push this year for all of us, that hunger and desire keeps you motivated with Kildare because you want to do it with this group of players as well.”
Wexford secured a 4-16 to 4-14 victory over Laois in their extra-time thriller last weekend but they come into this on the back of two final defeats, which included a TG4 All-Ireland Intermediate decider at Croke Park last summer.
However, Clifford knows there is nothing straightforward about finals like these and expects Wexford to be very competitive.
“Wexford have top quality players. They have that ability, no matter what is left on the clock and what the lead is, they keep going. That is an amazing trait for any team to have, they are just relentless,” said Clifford.
“They get the goals when it matters and they did that against Laois. They were six points down and they got two goals and they were two brilliant goals. They have that ability in their locker. That is something we have to be mindful of.
“When you are in a Leinster final you know the opposition are always going to be tough.”