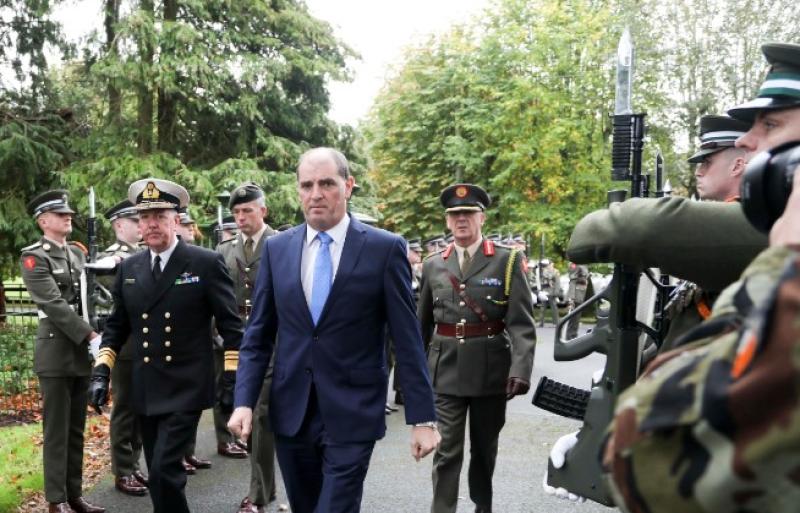 The Minister at the Curragh Camp

The Minister with Responsibility for Defence, Paul Kehoe, TD attended the Defence Forces Training Centre, in the Curragh, yesterday to welcome the 96th Cadet Class into the Permanent Defence Force.

The Minister was accompanied by Chief of Staff of the Defence Forces, Vice Admiral Mark Mellett DSM.

The Minister commented on the success already achieved by the cadets in reaching this point as they embark on the next phase on the path to becoming commissioned officers.

In addressing the cadets and their families Minister Kehoe said, “My role affords me the privilege of witnessing at first-hand the Defence Forces delivering on their high standards of operations both at home and overseas, in loyal service to the state.

The young men and women around you, your fellow Cadets, will today begin a journey that will test you both physically and mentally. It’s a journey that won’t always be easy. But it is one I know you embark on with both energy and determination.

And so, as Minister, my overriding request to you all today is work together and look after one another in order to stay on the path to becoming officers and indeed leaders. Your strength of character will be tested. But it will also be enhanced to prepare you for the demands that will be made of you over the coming months and years.”

Noting that the 96th Cadet Class includes 7 Cadets from Malta and one instructor from the Armed Forces of Malta, Minister Kehoe extended a welcome and spoke of the strong relationship between the two nations and said that “the partnership is an example of the mutual benefits that like-minded countries receive when they cooperate together.”

A career as an officer in the Defence Forces continues to offer many, varied opportunities for personal and professional advancement along with fair financial rewards and favourable terms and conditions.

In closing, Minister Kehoe thanked the families of the cadets for the support they have shown already.