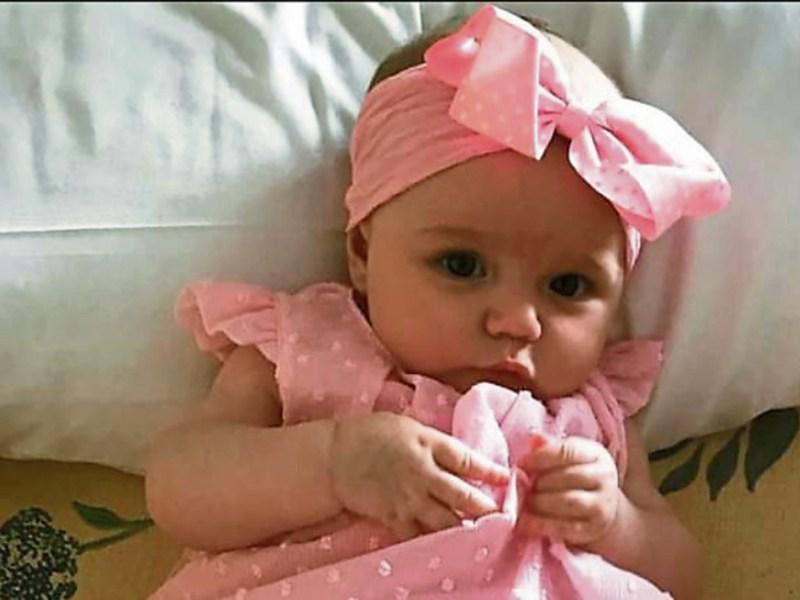 A fundraising football event takes place in Naas on Sunday, November 17, to help an infant girl who has cancer and has had a kidney removed..

Players of various ages and skill levels will gather to  take part in the game to raise money for the treatment of 18 months old cancer patient Amelia Fagan from Naas.

Amelia is the only child of Naas couple Eugene Fagan and Lisa Callaghan.

On November 6, she underwent an operation at Our Lady’s Hospital Children’s, Crumlin, to remove a kidney and a huge tumour, which accounted for 20% of her body weight.

And this followed four weeks of chemotherapy treatment aimed at thwarting growth of the tumour attached to her kidney.

Ameilia’s condition is not yet known. But Wilms tumour, which can affect both kidneys but in most cases one, has been ruled out.  It’s estimated wilms affects less than between six and 10 children in Ireland under five years of age.

“It is an aggressive form of cancer and it didn’t respond to chemotherapy. The tumour was taken out along with the kidney and it was a little larger than the size of her head,” said dad Eugene.

Amelia has been ill for much of her short life. It took some time before an accurate diagnosis was made.

“We knew something was wrong with her. At first a number of possible ailments were put forward, including a hernia and the tumour was diagnosed on October 7.”

Although the surgery was successful, Amelia has a way to go. She’s on a lot of medication, including morphine and she has to recover from the inevitable trauma of surgery, which necessitated an eight inch incision. And there will be many more hospital visits as her immediate post surgery recovery is monitored - not to mention longer term treatment.

Her parents have been told she faces another programme of chemotherapy lasting at least six months.

Eugene and Lisa have effectively been unable to work and they are grateful for the support they’ve received.

“We feel blessed because of all the help and messages of support we’ve received. I’m from Ballycane and the community there have been hugely supportive as have so many other people throughout all of Naas and elsewhere around Ireland, including lads I went to primary school with and have hardly seen since then. The support has taken our breath away.”

Funding will be needed to help finance expenses associated with ongoing treatment and care.

The all gender event is being organised by soccer coach Naas man Noel Murray and it’ll be played for the Dermot Murray Memorial Cup, a perpetual trophy which was initiated as a fundraising prize in memory of Dermot, which was donated by residents in Lacken

It’s hoped to generate €3,000 and your support would be appreciated.

The Ballycane Celtic club is providing the facilities, principally the pitch between Lacken View and the church and the club is fully behind the fundraiser.

There will be a mixed bag of talent on show, according to Noel.

“We will have some of the best players and most experienced players in the town, players of all ages will be there and a few who have never kicked a ball in their lives,” he said.