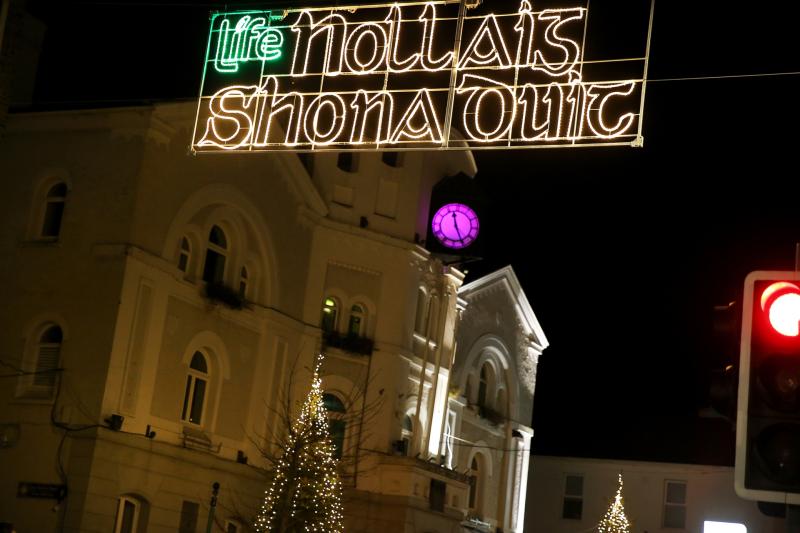 The colour purple is more than just a successful movie.

It’s been adopted as the hue of disability and two well known local structures, the Church of Our Lady and St David and the “Big Ball”, on the outskirts of Naas are among the monuments illuminated in the colour to mark International Day of Disabled Persons, which has been promoted by the United Nations since 1992.

Also lit up in purple yesterday were Naas Town Hall, Newbridge Town Hall and the spire at Maynooth University.

International day dates place on December 3 annually and there was an interesting gathering of voluntary groups and public bodies with an interest in disability at Aras Chill Dara yesterday.

It was themed “the future is accessible” and KCC’s access officer Brendan Hurley said it means that “we must all together look towards a future where the barriers which stand in people's way no longer exists.”

He added: “We envisage a future where people can access a building without using stairs, where a person can access a ramp to the beach or can access a main stream classroom or can get a job without fear of discrimination.”

Among the more compelling items of interest at the Kildare County Council offices was  a sensory tunnel which was set up by Irish Guide Dogs charity to give users a unique sense of what is like to be visually impaired. Users are invited to walk through the inflated structure blindfolded with street noises and loud traffic played over speakers. Surfaces such as a brick wall, wooden fence, netting, grass and fur which allows users to feel their way through a five metres long structure with panels and bumps on a floor - similar to what you’d expect to experience if you are visually impaired.

Those exiting the tunnel were asked to describe how it felt to experience life with visual impairment.

As I am, the national autism advocacy group, set up  an experience exhibition which allows people to step into the shoes of the autism community - by giving people a practical experience of what life is with autism is really like. The hope is that those who engage with the exhibition will see autism differently and “so be able to empathise more with those with the condition.”

Access Earth is a Maynooth-based digital platform which provides users with information about the accessibility of hotels, restaurants and tourist attractions the world over based on ratings given by other users with disabilities. It was set up by Celbridge man Matt McCann and has 5,000 users.

Other organisations taking part in the KCC event were Arthritis Ireland, the Irish Heart Foundation, KARE and National Council for the Blind Ireland.

“Disabled people are not different and we want to be treated as equal. There are many hidden disabilities. It’s not necessarily about something that’s visible like a wheelchair or a walking cane. It could be someone with a heart ailment or mental health issues,” said Majella O’Keefe of the Naas Access and Disability Group, which lobbies for facilities for disabled people.