FG’s Tony Lawlor seeks a return to the Dáil 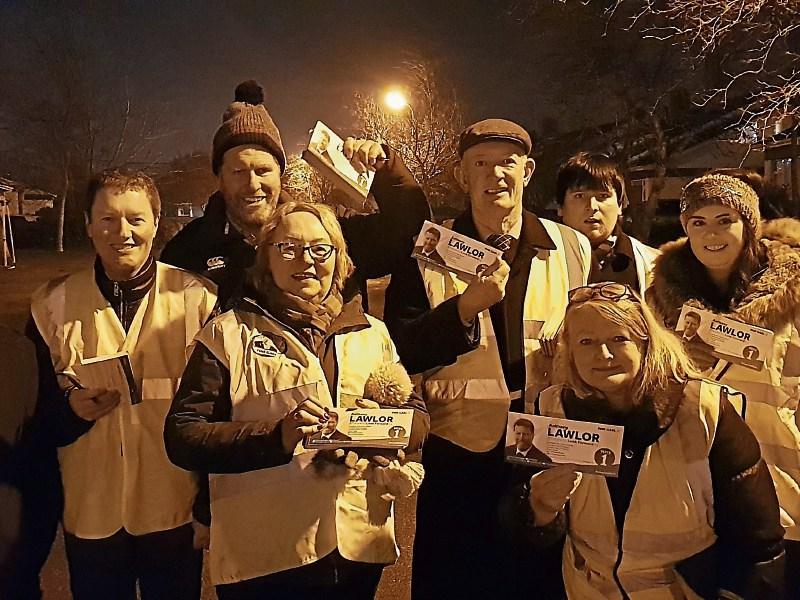 Tony Lawlor and some of his volunteer canvassers

“It’s nothing like 2016 when water charges were a big issue. And more people are at work now, with unemployment at around 4.5%.”

There’s no relief discernible in the Fine Gael general election candidate’s tone at the lack of hostility.

It’s more a statement of fact, wrapped up in curiosity. Lawlor, better known as Tony or “Woolly” to his friends is an election veteran by now.

And once again he’s Bernard Durkan’s running mate in the Kildare North constituency as the party bids to win two seats for the first time since the 2011 poll when Lawlor was elected as one of two TDs for Kildare north with veteran Durkan.

That election saw people exact revenge on Fianna Fáil as the country fell into depression. Sitting Fianna Fail TDs Aine Brady and the late Michael Fitzpatrick both lost their seats as the constituency turned on Fianna Fáil just like the country did.

Lawlor is bidding to win back the seat he won in 2011 when, along with the then independent TD Catherine Murphy, he was elected on the fifth count.

Now a seasoned politician, Lawlor followed his mother the late Patsy into politics. He has been a member of Kildare County Council and is a current senator.

Along with a small team of volunteers he moved through Lakelands as quickly as he could engaging voters for as long as they wanted to be engaged and leaving behind a leaflet with a handwritten note at the houses where there was no response. “We stop at 8.30pm because of children and families,” he said as his team moved swiftly between the houses.

A former rugby player with Naas RFC, (his brother Phil was a full international player in the early 1990s) he’s still a fit man.

“There are more people at work now. In Naas more people come into the town to work than leave to go elsewhere, like Dublin. In that sense it can’t really be called a commuter town,” he says.

Even so he acknowledges that there are commuter issues.

“Parking in Sallins needs to be provided because of the numbers using the train service but there will be no carriages until 2021 to address the demands of commuters. But there are parking places available at the Waterways if Irish Rail can come to an agreement with them,” he says.

Recently he has also introduced a Bill in the Seanad which will cut insurance premiums for local community groups.