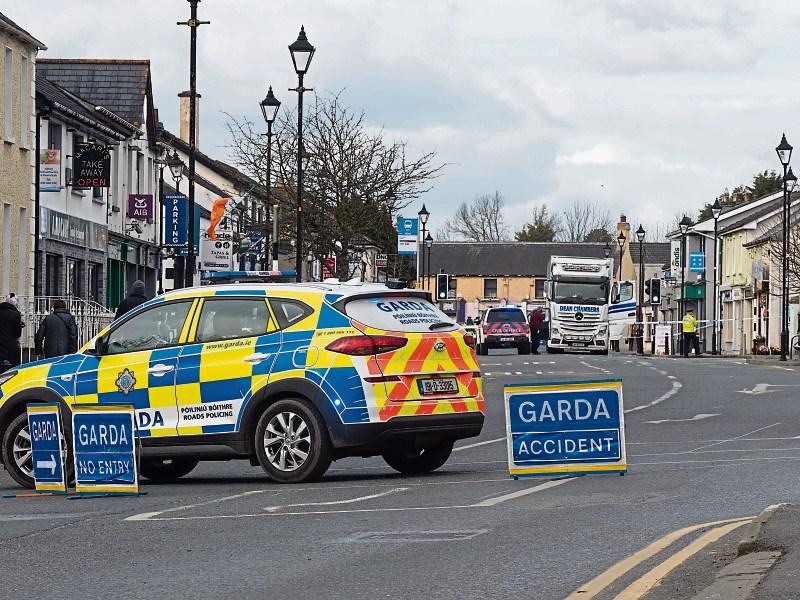 The accident scene in Clane

A road accident claimed the life of an 88-year-old  Clane woman last week.

It took place on the main route through the town on March 19, as Cora Perry, a widow, was crossing the street.

Mrs Perry was initially taken to  Naas Hospital where a post mortem examination was conducted the following day. A native of Ballyboden, Dublin, Mrs Perry was predeceased by her husband Seamus and a daughter Marina-Rose.

Her funeral took place on Monday at Glasnevin cemetery following requiem mass at the church in Clane.

Due to the coronavirus, the ceremony was private but members of Mrs Perry’s family were able to view the funeral mass from Portugal and Canada. Fr Paul O’Boyle, PP, Clane, said Cora was a really beautiful person who had lived in Clane for 20 years. He said the ceremony was “very dignified” and one of Cora’s daughters, who lives in Portugal, could watch the funeral mass on the parish webcam.

The deceased is survived by survived by her daughters, Leona and Serena, son James, sons in law Fran, Kevin and Joseph, and grandchildren Lucas, Carly, Aaron, Áedammair, Fionn, Isobella, Christien and Dominio, extended family and friends.