County Kildare's Covid-19 help plan aims "to leave nobody behind"

Community policing: On the Covid-19 beat with Kildare gardaí 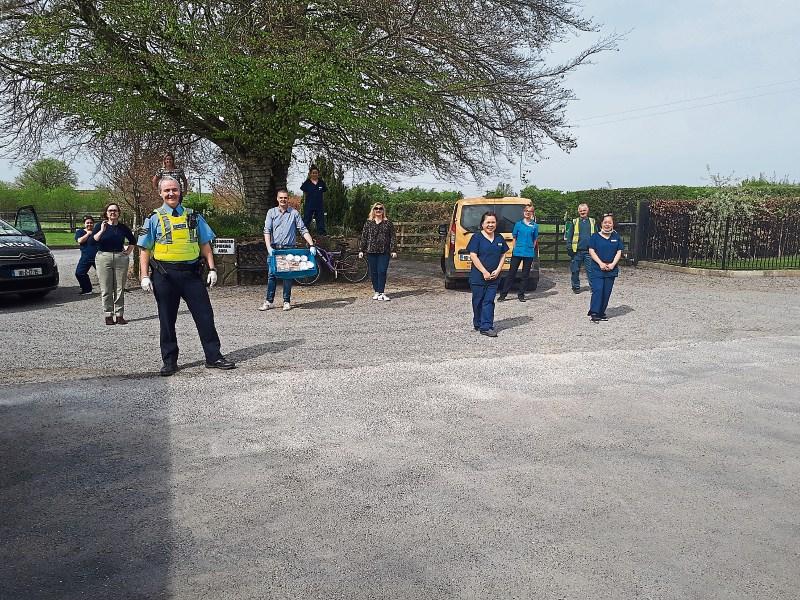 On a prematurely warm morning last week at an agricultural holding some miles south of Naas, a conversation took place between two gardaí and a farmer.

Words flowed back and forth over a four bar galvanised farm gate.

The easy pace of conversation matched the slow movement of cattle in a nearby shed as they ate hay from an opened round bale and drank water from a plastic tank.

The subjects covered the prices received from the sale of livestock, the price of alcohol, how bad roads can lead to poor driving outcomes, even murders in an African state.

The rolling background countryside was bathed in misty sunshine and it was as if time was standing still.

It was another small chapter in the expanding volume that represents the work being done to ensure that communities across County Kildare are not suffering unduly as a result of the lockdown imposed as the central plank to control the spread of Covid-19.

The day began for Gda Gary Cogan and Sgt Gavin Dunphy in Kilcullen, at Fallon’s restaurant to be precise, where they collected specially prepared food.

Specially prepared at the hands of Mickael Viljanen, head chef at The Greenhouse restaurant on Dublin’s Dawson Street.

The food production is a collaboration between Naas-based Redmond Fine Foods, a specialist ingredients procurement and distribution business; Brian Fallon of the aforementioned eatery and Mark Moriarty and Paddy Lee of The Greenhouse.

Rocky Redmond who operates Redmond’s with brother Ian said: “The aim is to bring hearty and wholesome meals to frontline workers and other individuals in the community.

“The meals bring a much needed boost in morale at this critical time. Brian Fallon has very kindly provided his kitchen in Kilcullen to facilitate this project. The project will run for a minimum two months and work to three days production and availability — Tuesday, Thursday and Saturday.”

It is a non-profit venture.

“All funds raised are used to cover the cost of ingredients and production. OSF Accountants in Clane, will independently manage and administer the funds.”

The food is prepared for Naas Hospital intensive care unit staff as well as those working in local nursing homes like Curragh Lawns, Larchfield, Craddock House, Willowbrook, and the community.

Some 250 meals are produced three times a week.

“It’s good wholesome nutritious food and more than that it is a morale booster. Our aim is to see out the longevity of the crisis and the money is needed to see out the project,” added Rocky.

Garda Cogan said: “They identified a need to do something and they’ll do it for as long as they can depending on when chefs will be called back to work, for example.”

One day last week the gardai delivered some 120 meals over a wide area between Naas and the County Wicklow border.

“This is a massive relationship building process with the community. People can approach us by calling the station and like a hospital setting we triage the calls and divert the need to organisations, many of them working voluntarily, best placed to deal with them. We work with many groups such as the Red Cross, Civil Defence, Naas GAA club to name just some. And the gardai have delivered everything from “ventilators to hair nets.”

Among those they met was Ballymore man Myles Byrne, who praised the overall effort to reach out to people and he feels vulnerable.

“If I get the virus I’d say my chances of surviving it are zilch, ” he said.

“We can contact the community first responders who are also trained to deal with issues like stroke, cardiac arrest or choking and we are available to settings like McAuley Place in Naas. Our work is to try to match the need to the skilled professional,” said Gda Cogan.

Normally people contact the gardai when a law has been broken or some trouble is brewing.

But Gda Cogan says that the virus crisis is allowing community policing to develop to a much higher — and probably much more practical — level.

The gardaí meet with a number of organisations every Friday for a crisis meeting to share what they have learned and to gather information.

Kildare County Council’s role in coordinating all of the Covid-19 emergency responses is crucial.

The thrust of all of their efforts — Kildare County Council, the gardai, the voluntary groups, the volunteers — is summed up by Sgt Dunphy.

“Nobody gets left behind.”