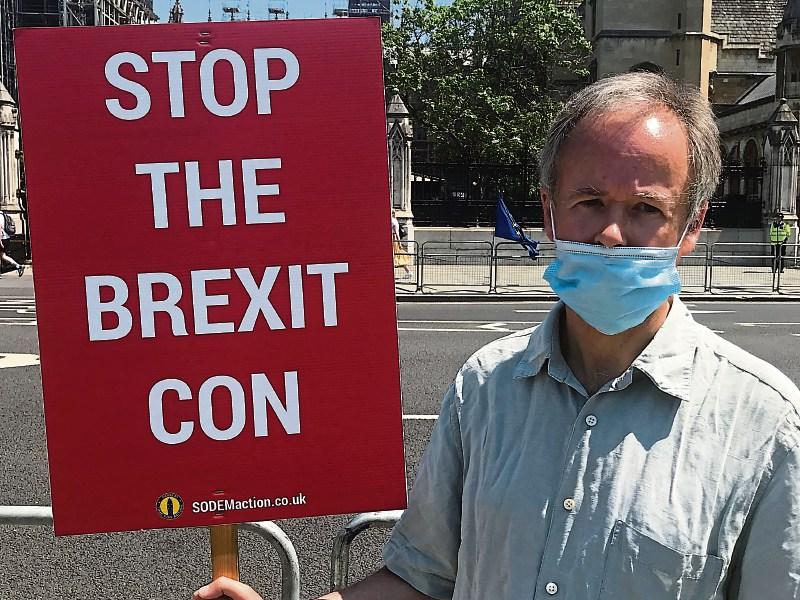 Naas man Peter Benson has resumed his anti-Brexit demonstrations in London by taking part in a protest against a no-deal Brexit at Parliament Square, London, which is overlooked by the Houses of Parliament.

“The UK and EU kicked off face to face Brexit negotiations in Brussels on June 29. These are critical negotiations for all EU citizens but especially those who live in the UK. The anti-foreign xenophobic nature of the hard right in the Tory party means these will be difficult talks and the threat of a no deal is constantly being pushed in the Tory media from the Number 10 Downing Street spin machine,” Mr Benson said.

He added that as an anti-Brexit campaigner, joining the no deal campaign in a socially distant protest outside parliament is essential — because the success of the campaign is vital for all Irish citizens both in Ireland and the UK .

“This scenario cannot be allowed to happen under any circumstance especially as we have yet to understand the economic and health fallout of Covid 19.”

Mr Benson added: “The stakes are very high as between 3.5 and 4 million EU citizens live in the UK and their rights, already under pressure, risk being further undermined. For the first time ever I feel like a foreigner but I stand side firmly side by side with my fellow EU citizens across the UK.”

Mr Benson, an accountant, participated in protests against Brexit last summer, prior to the UK general elections.

He believes the new Irish government should work to ensure that a no deal exit is prevented and convincing the UK to defer the talks til after the pandemic is the best and only option.

“There are only losers with a no deal scenario; it will have a big impact on the Irish Economy largely as a result of the lack of preparations by the UK government.”