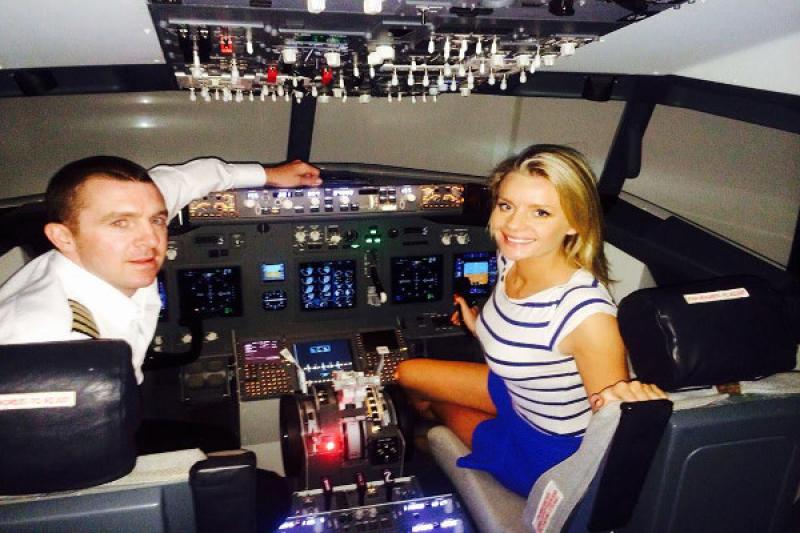 Above: Instructor Glen Healy demonstrates the Boeing 737 simulator to model Jane Lyons. Kildare experts that help people conquer their fear of flying said they've been swamped with panicked customers due to recent airline disasters. Recent times have seen some of the worst-ever plane disasters including the notorious Malaysia Airlines Flight 370 which vanished without trace over the Indian Ocean with 239 passengers and crew now presumed dead. And a few years ago, an Air France jet crashed into the Atlantic Ocean killing three Irish women in their 20s. The Fear of Flying Ireland firm based at Weston Airport in Leixlip is run by two veteran pilots help people conquer their fears with a hi-tech cockpit simulator and psychotherapy sessions. Instructor Glen Healy said: "There has been a number of high-profile airline incidents in recent times which has worried people which may be susceptible to a fear of flying." Airline captain Glen, uses a hi-tech Boeing 737 flight simulator to help calm nerves of would-be passengers. He added: "A lot of people that come to us need to travel abroad for work and the fear of flying is causing them a lot of difficulties. "Air travel is full of stressors and people's fears about flying are mostly triggered by turbulence, bad weather, claustrophobia and a loss of control feeling." Glen gives hands-on flying demonstrations in the simulator which has a wraparound visual windscreen and all the controls and dials a pilot usually has access to. Glen's business colleague Ruth Little, also an experienced pilot, is a trained psychotherapist and assesses and coaches clients on mental attitudes towards flying. Dubliner Glen, who has 18 years of experience in the aviation industry, added: "We had one man who was a Manchester United fan but was forced to take the boat to games for 14 years because he was afraid to fly, this problem can have a big impact on people's lives." People can choose from either our one-day group seminar with a 30-minute simulator flight or a one-on-one session which includes a one hour real time flight from Dublin to Manchester in the Boeing 737 flight simulator. More information is available on www.fearofflying.ie.
ADVERTISEMENT
Advertise with Us
ADVERTISEMENT
Advertise with Us