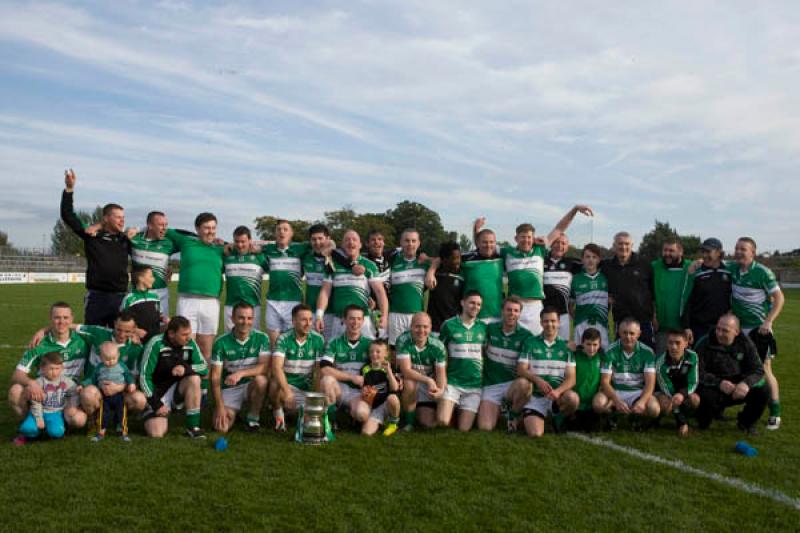 Castlemitchell 1-11 Cappagh 0-7 Tom Cross Junior Football Championship final Castlemitchell are the Junior Football champions for 2015 after a comfortable win over Cappagh in the final in St Conleth's Park in Newbridge. It's a major success for the small club nestled between Athy and the Co Laois border - which remarkably only secured its own official pitch in 2001. Castlemitchell led from start to finish in this low-scoring contest and both sides played a open brand of football in good conditions for the appreciative crowd. The winning team had the stronger defence and it helped to thwart several attacks by Cappagh particularly in the second half. Castlemitchell's midfield pairing of Emmet Hyland and John Fennelly were dominant in the middle of the park and their ability to kick-outs from Cappagh goalkeeper Paul Doran helped exert control on the game in the early stages. At the other end Doran's opposite number Michael Lawless was getting impressive length into his kick-outs and they were reaching past midfield at times which gave the half forwards a good platform to set up attacks. The only goal of the game in the ninth minute from corner forward Joe Maher and it gave Castlemitchell a major advantage in the low-scoring affair.  Midfielder John Fennelly followed it up with a point from distance in the 11th minute. Cappagh's forwards tried to respond several times but the stout defence of their opponents kept swallowing up their efforts and the ball was cleared up the field again. Several half-forwards even found themselves tracking back into their defence to help win the ball and give some badly-needed possession to their inside forwards. Overall, Cappagh were slow to settle into the game but well-worked points eventually came from Andy Walsh (2), Dean Brennan and midfielder Thomas Jackman converted a free. As the half went on, Tadhg Fennin was slowly punishing Cappagh with his accurate free-taking and his tally for the game would eventually reach 0-6 as he capitalised on the indiscipline of the opposition. Goalkeeper Michael Lawless even contributed a converted 45 but he would later shoot wides from long-range efforts but nevertheless deploying him as a free-taker helped to run down the clock for the green and white. Castlemitchell were wasteful at times and Kieran Harris for one had three wides which many spectators feared could be the difference between the sides at the end but luckily it wasn't to matter. The closing minutes of the first half saw Fennin convert another free to make the scores 1-5 to 0-4 as the sides had their interval break. The second half was a much tighter-affair as close man-marking helped to stifle the flow of scores from both sides. A quickly-taken Cappagh free by Thomas Jackman set up Dean Brennan for a point after he took a pass from Shane Harris. However Castlemitchel responded with a strong run by Tadhg Fennin who combined with Trevor Griffin and he raised the white flag to keep the scoreboard ticking over. More points followed by left half back Brendan Maher on 40 minutes to put a clear six points between the sides and Castlemitchell began to look comfortable. Another free on 53 minutes by Fennin brought his team's tally to 1-10 and barring any late goals by Cappagh, it was looking like their day. Walsh kicked a point for Cappagh but his side was running out of time and opportunities to turn the game around. Castlemitchell sent over an insurance point to make it double scores at 1-11 to 0-7 and soon after referee Henry Barrett blew the final whistle to make it a historic day in Newbridge for the south Kildare outfit. The winners had their best players in Tadhg Fennin, John O'Connor, Ray Fitzgerald, Brendan Maher and Michael Lawless while Dean Brennan, Andy Walsh and Thomas Jackman and Kevin Doran stood out for Cappagh. Scorers: Castlemitchell: Tadhg Fennin 0-6f, Joe Maher 1-0, Kieran Harris 0-1, Brendan Maher 0-1, Michael Lawless 0-1 (45), John Fennelly 0-1, Trevor Griffin 0-1. Cappagh: Andy Walsh 0-3, Thomas Jackman 0-2, Dean Brennan 0-2, Castlemitchell: Michael Lawless, Brian Kavanagh, John O'Connor, Matthew Moore, Fionn O'Rourke, Ray Fitzgerald (c), Brendan Maher, Emmet Hyland, John Fennelly, Trevor Griffin, Tadhg Fennin, Mark Fennelly, Kieran Harris, Karol Haris, Joe Maher. Subs: Tomas Fitzgerald for Kieran Harris, Stephen Donovan for Fionn O'Rourke. Cappagh: Paul Doran, William Hopkins, Paddy Cullen, Alan Morrin, Michael Nealon, Ronan Walsh, William McDonnell, Kevin Doran, Thomas Jackman, Dean Brennan, Andy Walsh, Shane Harris, Eddie Hopkins, James Grogan, Brian Dillon. Subs: James Towell for Michael Nealon, Paul Byrne for Eddie Hopkins. Referee: Henry Barrett.
ADVERTISEMENT
Advertise with Us
ADVERTISEMENT
Advertise with Us