The Curragh racecourse to host raceday for local army families 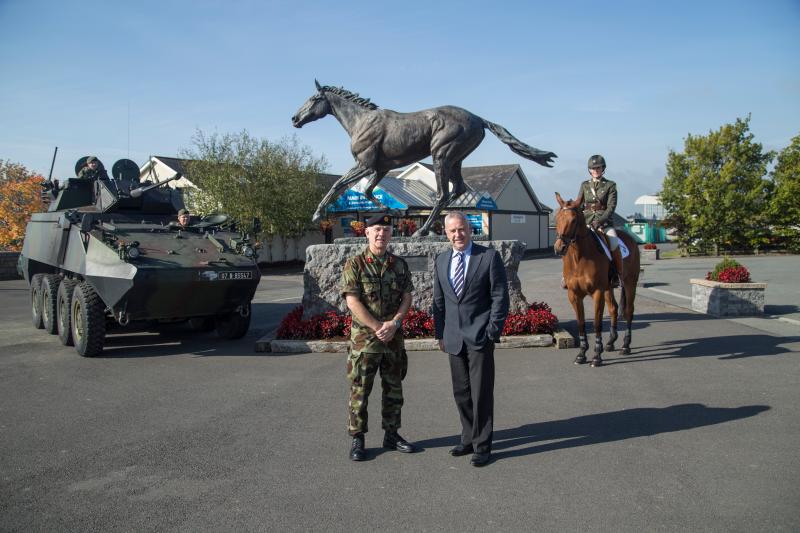 Above Photo– Brigadier General Joe Mulligan, General Officer Commanding of the Irish Defence Forces and Paul Hensey, General Manager of the Curragh Racecourse launch the 2015 Defence Forces Race Day taking place on Sunday 11th October.  The Curragh Racecourse and Irish Defence Forces will stage their annual race day on Sunday 11th October. The special day will feature seven races starting at 1.25pm including the 100,000 euro Tote Irish Cesarewitch and Waterford Testimonial Stakes for the Defence Forces Trophy. There will be great spectacle and pageantry throughout the afternoon from the Army, Navy and Air Corps with displays of current and vintage equipment, memorabilia and music, while the The race day will also help raise funds for the Defence Forces Benevolent Fund Paul Hensey General Manager of the Curragh Racecourse commented, “The racecourse is delighted to stage our annual race day to promote the excellent and very historic relationship between the Curragh and Defence Forces. We hope that many of their personnel both past and present will get together for a fun day out for all the family.” The Ireland v France World Cup rugby game will be shown on screens throughout the racecourse following the last race at 4.45pm and anyone wearing an Irish rugby jersey will gain FREE admission. The 2015 Curragh season finishes on Tuesday 13th October with a competitive seven race programme featuring free admission for all race goers.
ADVERTISEMENT
Advertise with Us
ADVERTISEMENT
Advertise with Us
ADVERTISEMENT
Advertise with Us
ADVERTISEMENT
Advertise with Us