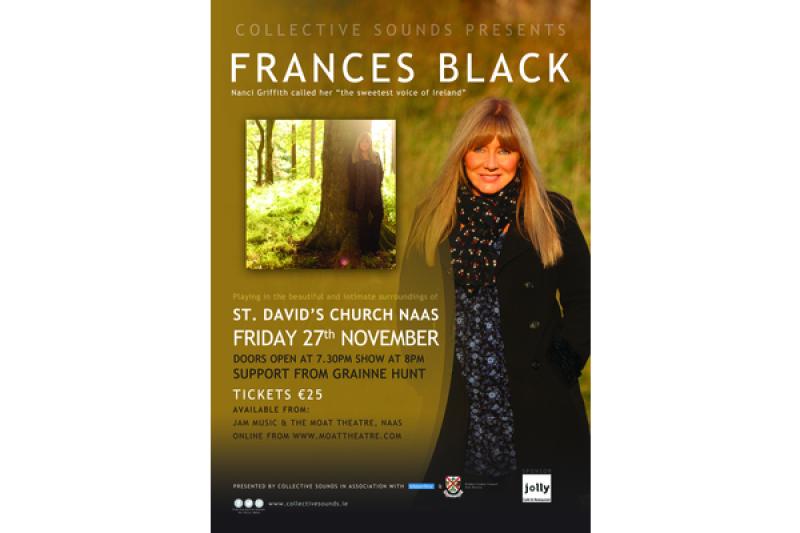 Often referred to as having ‘the sweetest voice of Ireland’, Frances has been on the Irish and International music scene since the late 80s, with a string of bestselling albums, awards and other accolades behind her. She returns to Naas on Friday 27 November to perform in St David's Church from 8pm. Tickets available from Jam Music store and The Moat Theatre Box Office, Naas for €25. Frances’s career began back when she was just 17, singing alongside her older siblings in the band, ‘The Black Family’. She then went on to join the band ‘Arcady’ in 1988 where she featured on their album, ‘After the Ball’. Frances subsequently embarked on a successful collaboration with acclaimed singer-songwriter, Kieran Goss, with whom she released the album, ‘Frances Black and Kieran Goss’. Frances really took the music scene by storm, when the song, “Wall of Tears,” which she had recorded with Kieran, and the single “After the Ball,” which she had recorded with Arcady, were placed on the album, ‘A Woman’s Heart’. The album went on to become the biggest selling album ever in Ireland and also featured music greats like Dolores Keane. Mary Black and Sharon Shannon. Soon after, Frances released her first solo album, ‘Talk to me’, which was the number one bestselling album in Ireland for ten weeks running. Six more best-selling solo albums followed suit. Book your tickets now for a night of beautiful melodies and stirring lyrics delivered with passion and feeling from one of Irelands best loved singers.
ADVERTISEMENT
Advertise with Us
ADVERTISEMENT
Advertise with Us
ADVERTISEMENT
Advertise with Us
ADVERTISEMENT
Advertise with Us