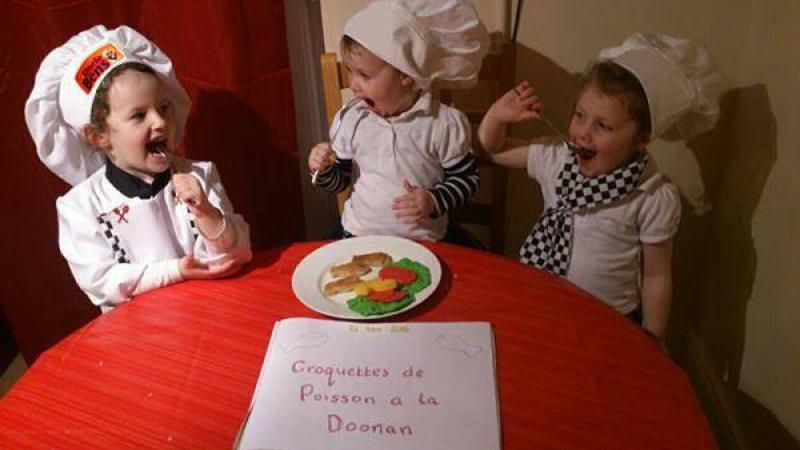 Maynooth based Teresa Toner Doonan and her daughters, Amy aged five, Leah aged four and Erin aged just under two years old have scooped a €1,000 cash prize in the nationwide ‘Cook Along with Ben’s Beginners’ competition. Teresa and her little helpers tuned into the Uncle Ben’s Ireland Facebook pagecookery demo and joined celebrity chef Gary O’Hanlon in cooking up some Smoked haddock & Pea Fishcakes. Teresa posted some pictures of her ‘busy bees’ cooking up a storm on the Uncle Ben’s Ireland Facebook page and won €1,000 for their tasty creation.   ‘Cook Along with Ben’s Beginners’ is an initiative aimed at encouraging parents and children to cook together. Research indicates that involving children in preparing meals is one of the best ways for children to build a closer relationship with the food they eat and develop healthy food habits. New research undertaken by Ignite Research with children aged eight and under revealed that: -          Almost 9 in 10 children wish they could cook dinner more often with their parents (85%) 1 -          Cooking together is a great way to bond with your child as 8 in 10 children stated they find cooking fun as they get to spend time with their mum and dad 1   Ben’s Beginners guest chefs, who included twins David and Stephen Flynn from The Happy Pear and Gary O’Hanlon of TV3’s The Restaurant, have been on hand to demonstrate recipes and answer questions on Facebook. Those families who shared what they had cooked were in with the chance to win €1,000 each week.   Teresa who is the fifth and final winner, said “To say we were thrilled is an understatement, the kids are delighted to have won! They had great fun cooking the dish and loved looking the part with their chef’s hats on.”
ADVERTISEMENT
Advertise with Us
ADVERTISEMENT
Advertise with Us