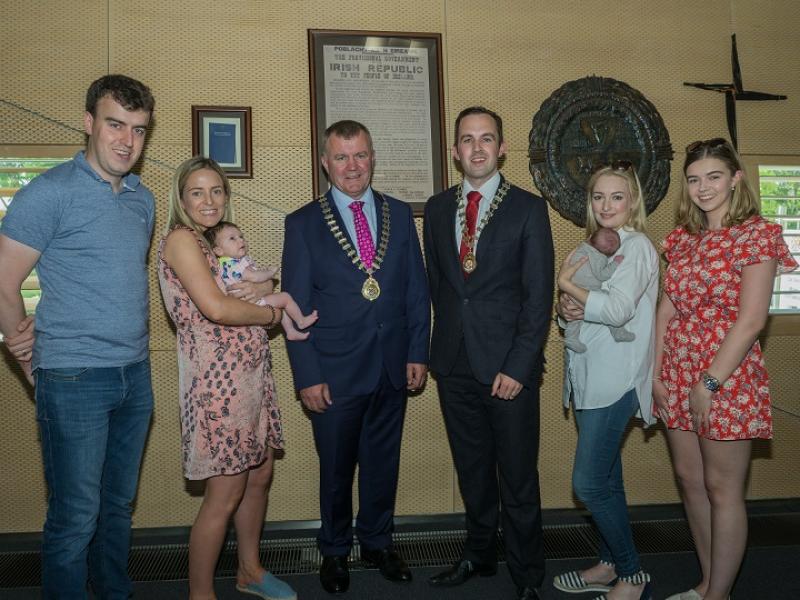 A Co Kildare father and son are now the new Mayor and Deputy Mayor with plans to fight against homelessness and shortage of housing over their 12 months term.

Former Minister, Séan Power, along with his son Rob Power, a Cllr in Naas District,  were given the chains of office at Kildare County Council offices, last Friday, with Cllr Martin Miley’s term coming to an end.

Rob,  the new Deputy Mayor, whose one week old son, Maxwell, was one of the many family members showing support  last Friday is deeply concerned about the lack of affordable housing and obvious short supply of rented houses.

The 27-year-old, native of Caragh,  who is also employed at Twitter in Dublin, is now meeting couples with children, in Co Kildare, who are both employed, but do not have enough money to pay the rent.

His father, Séan, a former Minister of State who serves in the Newbridge Municipal District, and was   a Fianna Fáil TD, between 1989 and 2011, is optimistic that within three years, there will be a significant improvement in the lack of housing supply throughout the county.

Currently there are 19 houses nearly constructed on the Athgarvan Road in Newbridge and Séan is confident that within weeks people can move in.

Cllr Power Senior is a strong advocate of social housing to fix the homeless crisis and anticipates that over the next 12 months, hundreds of social houses will be under construction in the county.

He said: “Homelessness is a new phenomenon in Co Kildare. We felt that it was a city problem, but it has peaked in the last year or so. I attended the wedding of a young couple some time ago, now that man is homeless, this man never thought that he would be homeless.”

He feels that  the best solution to provide accommodation for the homeless is to have small units throughout the county. The small units could he says alleviate the risk of crime within the hostels.

He said: “If we can get a better handle on the homeless, then we can deal with the issues, we need to have communication with these people, assistance can be provided.”

Meanwhile, Rob Power, is one of nine councillors in the Naas Municipal District, due to soon vote on the controversial relief road for Naas. It is anticipated that the Naas Inner Relief Road will alleviate the current traffic congestion and delays experienced in Naas town centre, on the existing R445 Dublin Road and the R410 Blessington Road.

However, there are concerns from residents on the proposed routes that traffic congestion will worsen, as some say that the road is not fit for purpose.

Meanwhile, Rob Power, believes that it will help to improve the lack of housing supply in the county.

He said: “It could be before the end of July that we vote on this, if the road goes ahead then funding has been approved for 400 houses. I completely understand the residents concerns, but it will go to public consultation.”