Women’s and girls’ rugby is growing from the ground up 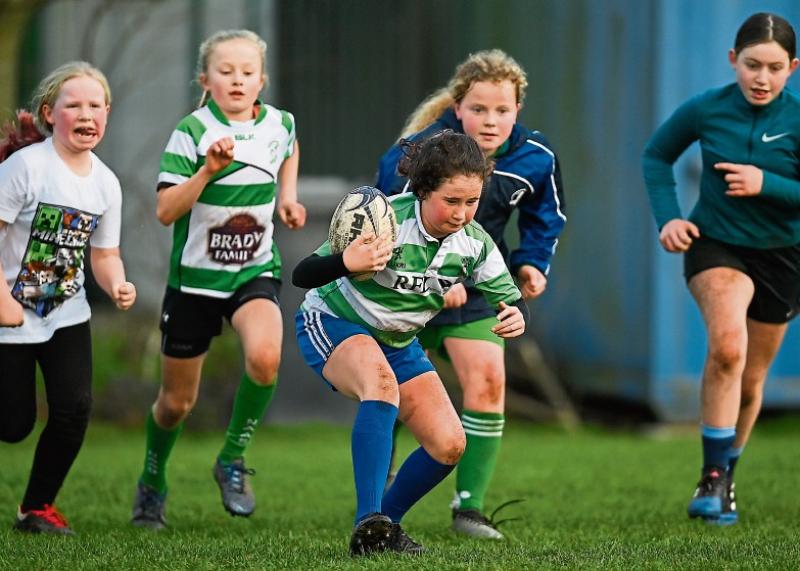 Visit most rugby clubs on a Saturday morning and you’re as likely to see squads of young girls as boys flying around, throwing passes and making tackles.

While this seems like the most natural scenario in the world these days, it’s a situation that has come about only with a huge effort. In 2009 there were just seven girls youth teams in Leinster. By 2017, there were 60 girls teams between u14 and u18 in 33 Leinster clubs. Just before Covid-19, this had grown to 81 youth teams in 46 clubs.

There has also been an explosion of participation at mini-rugby level, with many clubs now running all-girl training sessions at u8 and u10 level. Anecdotally, huge numbers of kids flocked to the game last autumn as many other indoor activities ceased due to Covid-19 restrictions. Phenomenal numbers took part in the IRFU’s summer Give It A Try (GIAT) initiation programme run by clubs, which aims to give girls aged 8-14 a taster of the game in a fun environment.

The trick for clubs will now be retaining those girls who took an interest when rugby was the only show in town.

Straffan woman Jennie Bagnall, lead women’s development officer at Leinster Rugby, is the powerhouse behind much of the growth in grassroots women’s and girls’ rugby in the province over the past decade.

The success of the women’s game at international level has helped raise its profile — Ireland won the Six Nations in 2013 and 2015, and team games are now aired by RTÉ, while the 2017 women’s World Cup was held in Dublin and Belfast, attracting a huge audience. Yet Jennie says the real participation driver has been the huge numbers coaching and promoting the female game in clubs and schools.

The aim now is to get women, including mums currently standing on the sideline, involved in coaching and managing girls’ teams. Many don’t feel confident enough to get involved because they have not played the game themselves.

“Ninety-nine percent of mums would say ‘I don’t know anything about rugby’ but I say to them ‘you know more than your six-year-old daughter’,” said Jennie. 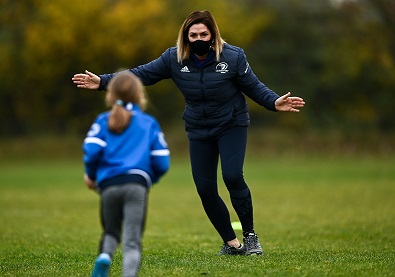 Tag for Every Mum

To encourage them to get involved, Leinster is piloting a Tag For Every Mum programme which will run in tandem with GIAT this summer in Clane, Tullow, Ashbourne, Roscrea, Clondalkin, Terenure, Clontarf and Blackrock.

“They will learn to play tag rugby on the pitch next to where their daughters are playing. It’s to make mums feel welcome and feel like they are contributing something to their daughter’s sport. Ideally they will stay on, coaching or managing or supporting other coaches or getting involved on committees,” said Jennie. (The sessions are open to any woman interested, irregardless of whether they have daughters playing).

“A club’s coaching setup may look like a well-oiled machine, but it’s mostly just people volunteering and doing the best they can. Getting involved gives you an outlet to engage with your daughter, and it’s much more enjoyable than you think. The hour goes much quicker if you get involved.”

There was a lack of game time at girls’ youth rugby last season — and no blitzes at the minis level — due to the Covid-19 pandemic. That will mean a slow start to the season this September, with an emphasis on fun training sessions and local friendly matches to rebuild confidence on the pitch.

“There is still this age-old thing that rugby players are still big beer-drinking men, and there’s surprise when people look at the Irish girls playing and say they’re all so small and slim and pretty,” said Jennie. “But what your 10-year-old daughter is going to play is not what you see on TV. It is like for like, 10-year-olds playing 10-year-olds, and the game we teach them to play is all about evasion.

“There is definitely still some resistance to girls playing rugby, people say ‘my little girl is not going to play rugby’. It’s not until people come out and see it played that they realise its skill level and agility,” said the Coventry native who admits her own dad, who brought her to rugby matches as a youngster, was horrified when she started to play the game at university. Jennie’s own three young daughters are now keen players for MU Barnhall in Kildare, where she was instrumental in setting up the women’s team in the early days of women’s rugby in Ireland.

Stars of the future

Girls’ and women’s club rugby in Ireland is a hugely sociable sport for participants of any age, and a game which can be played well into adulthood by all - even those just looking for a fun way to keep fit.

The Irish women’s national and provincial teams have been composed mainly of those who transferred to the sport in their later years, with many taking it up at college or having a go in the GAA off-season. Today, however, talent is being nurtured at an underage level through clubs with support from the provinces.

Unlike in the boys’ and men’s game, there has been virtually no tradition of Irish schoolgirls playing rugby, so there is no equivalent of the famed schools senior cup team members progressing to provincial academies. It is only in recent years — at the request of enthusiastic girls and with help from supportive teachers and coaches — that introductory sessions and blitzes have even started to take place in schools.

Instead, girls between the ages of 16 to 18 who want to progress to provincial level in Leinster take part in regular player development sessions, and then play in regional tournaments, from which Leinster selections take place. Future plans are being put in place for a similar set-up at u16s level.

Despite their international success, the Irish women’s 15-a-side team are not professional players and many juggle full-time jobs with training and playing commitments. The Irish Women’s Sevens team, on the other hand, are professional players contracted to the IRFU who can travel the world playing professional Sevens rugby. Many also play with the national Union side. 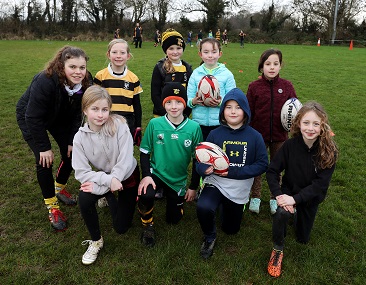 It’s no surprise that the Sevens game is now seen as a potential pathway to a professional rugby career for young Irish female rugby talent, who want to follow in the footsteps of players such as Ashleigh Baxter, Dorothy Wall, Hannah Tyrrell and Amee-Leigh Murphy Crowe.

Jennie predicts “very exciting times” ahead on the Irish scene in the next decade, when all the underage talent comes to fruition.