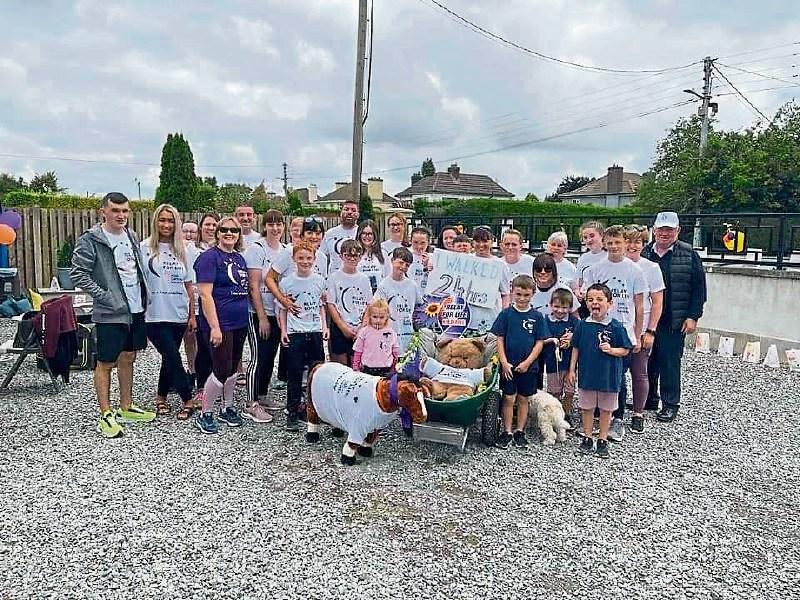 The Newbridge Relay for Life team

A mother-of-four whose uncle passed away from cancer pushed a wheelbarrow around Newbridge last weekend to raise funds for the annual Relay for Life fundraising project.

Caroline Morrissey praised the residents of the town for supporting her and her band of family and friends who joined her in the 24-hour Irish Cancer Society initiative between Saturday and Sunday.

Caroline, who works for Farrier Supplies company in Kildare town but took the day off on Monday to recover, said she has raised thousands of euro and money is still being donated online.

The Green Road resident told the Leader: “I came up with the idea of the wheelbarrow because it would be eye-catching.

“I put a big old teddy bear into it, which was my son Owen's for this first Christmas so it's about 30 years old.

“I got a lot of support from family and friends and we started going around our local area first and then we decided to do laps of the Main Street.

“People were fantastic and there were lots of people waving and beeping their horns and they really dug deep to put money in our bucket.

“Young people in their late teens or early 20s were also brilliant and they are often criticised.

But they said 'hello' gave what they could even if it was a euro or some change."

“It's all about creating awareness as well as raising money.”

At one point in the relay, the wheel of the wheelbarrow became soft and Caroline and her supporters had to make a detour to McLoughlin's filling station on the Moorefield Road to get it pumped up!

Caroline said she has been taking part in Relay for Life events since 2015 and dedicated this year's event to her uncle Pat Hanniffy who passed away due to cancer in December last year.

Pat was a well-known golfer and his funeral cortege even paused outside Edenderry Golf Club on its way to the Funeral Mass Holy Trinity Church in Derrinturn.

Caroline said that Relay for Life events had more significance this year because they were virtual due to Covid-19 restrictions.

She added: “Events were brought out of racecourses like in the Curragh or Punchestown and onto the main streets of towns and villages in communities which is good.

“People got to experience the Relay events as they went about their lives at the weekend and I think there was more significance to them.

“At the end of the day everybody knows somebody or is suffering or has passed away due to cancer — it's in all our lives.

“Relay for Life is about taking the time out to remember those we love and have loved.

“People like me come back year after year and I hope to continue doing this.”