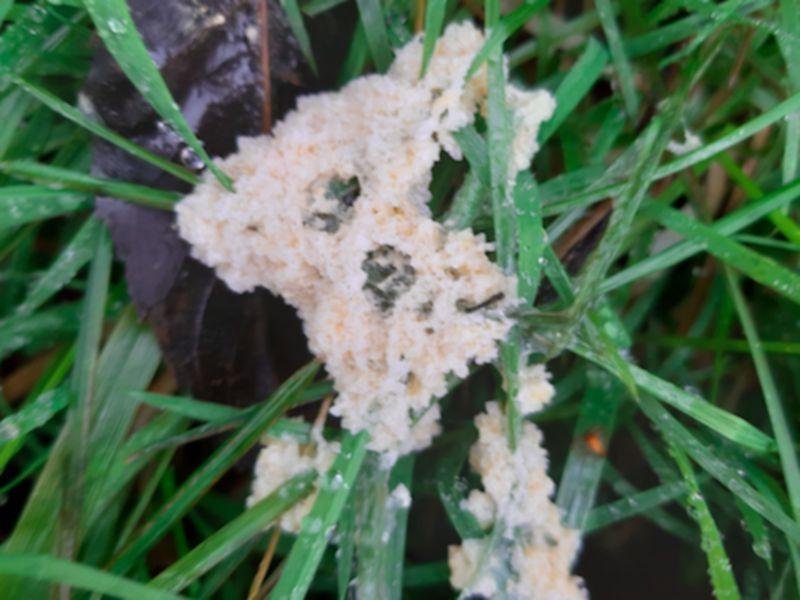 As you start to read this week’s piece I recommend you are not eating. The reason why, you might ask? This week’s wildlife species has an unusual name, Dog Vomit!

It was my colleague who identified that this slime mould had emerged on a grass patch shaded by trees in the front courtyard of the Bog of Allen Nature Centre. As the image shows, when I took the photograph it was pale and looked liked scrambled eggs — however by the time you read this it will have turned bright yellow in colour before eventually turning black.

You might think that it looks like a type of fungus but slime moulds are actually different.

Fungi are valuable nutrient recyclers on our planet as they break down dead leaf litter before ingesting some of the nutrients to support their growth.

Regardless of how they break down the dead leaf litter, both are considered decomposers and support nutrient recycling in our natural world.

Neither fungi nor slime moulds flower. They both produce spores, which make them particularly difficult to remove, as these spores can survive for many years and are very resilient to prolonged periods of cold and hot weather.

Slime moulds do enjoy wet conditions, and as you would expect they emerge mainly in autumn time in our communities both due to the weather and the increase in leaf litter.

Although both the name and appearance of Dog Vomit is not pleasant, don’t worry if you come across this species in your community. Slime moulds are not diseases and will not harm plants.