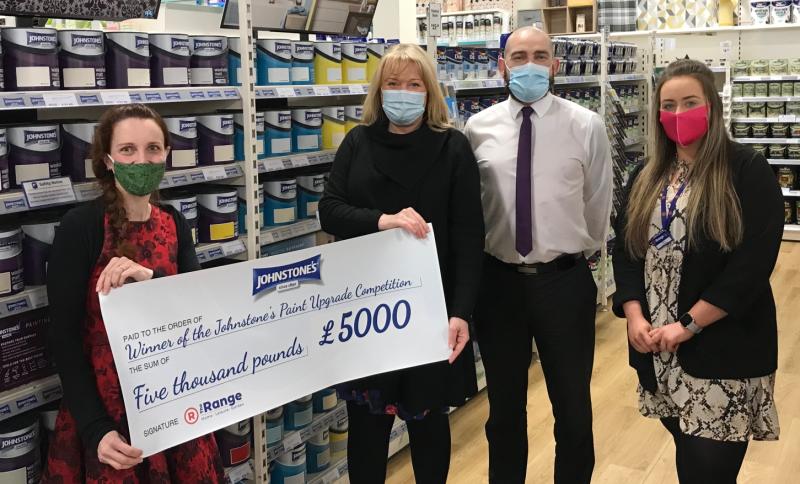 A mother from Kildare was delighted to hear that she won €5,000 for a spending spree.

Silke Wille netted the pre-Christmas windfall when she was announced as the prize winner of a nationwide competition for The Range, which was held in collaboration with Johnstone’s Paint.

She was presented with her gift cards at The Range store in Maynooth by Marianne Shipley of Johnstone's Paint.

Ms Wille said about the great news: "I was extremely shocked to receive the call to let me know I’d won... To be honest I was waiting for the catch, because I couldn’t believe it was true!"

"I’m going to use half of the gift cards to give my children the best Christmas possible and spruce up the home with the homeware and decor items available at The Range."

She added: "I’m totally undecided on how to spend the rest but it’s so great to know I can go shopping again in the New Year."

During Autumn, shoppers at The Range who bought a tin of Johnstone’s Kitchen, Bathroom or Washable paint from stores across the UK and Ireland were given the chance to win a grand prize of £5,000 in The Range gift cards.

A further 20 €50 gift cards were distributed to winners as runner up prizes.

Darren Shannon, area manager of The Range for Ireland, said about the competition: "Teaming up with Johnstone’s to offer one of our shoppers a huge prize like this was such a joy."

"We are delighted for Silke, who now has the difficult choice of how she will spend her gift cards in store," he added.

Marianne Shipley also commented: "Over the last 18 months home renovation, decorating and DIY has really taken off, as people look to give much more focus to their home, creating refreshed spaces that make their life easier."

"It’s been great to collaborate with one of the nation’s favourite home and leisure retailers to deliver a gift like this at Christmas."

The Range is a home, leisure and gardens retailer selling over 80,000 products across 18 departments including DIY, Kitchen & Dining, Furniture, Arts & Crafts and Textiles.

Its first store was opened in 1989 under the name CDS and there are now 200 stores across the UK and Ireland.