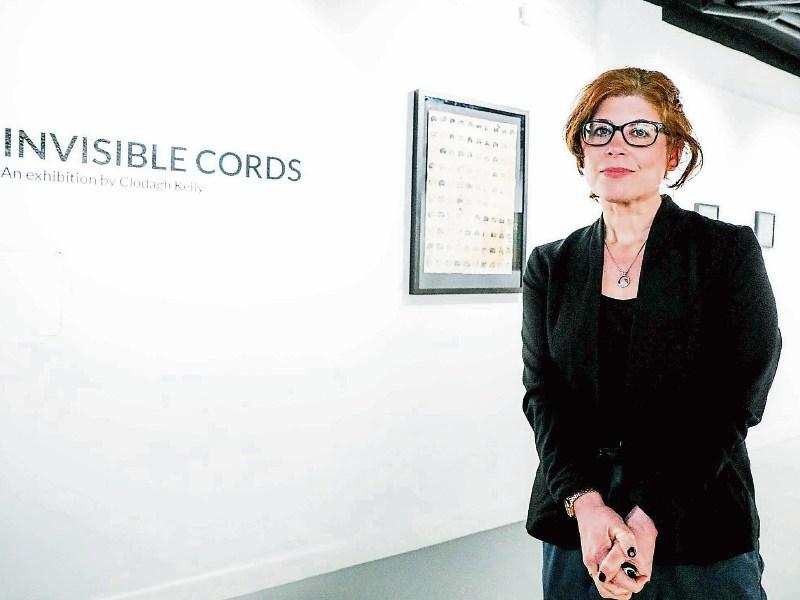 A new visual art exhibition by Kildare-based artist Clodagh Kelly has opened at the McKenna Gallery in Newbridge’s Riverbank Arts Centre, and runs until February 18.

Invisible Cords is a collection of artworks created over the last 10 years by Clodagh, using drawing, mixed media and natural materials to explore health, landscape, healing and form in space.

This exhibition draws from three bodies of her artwork — Scratched Room, Cruel Nature and Boundaries, allowing the underlying invisible cords that resonate between the different series to emerge.

“The materials I use are specific to each artwork — mud, soil, wood, charcoal and water,” Clodagh said.

“For example, Boundaries is made on cardboard from a large retail shop where plastic water bottles are displayed. Water being symbolic of the fluidity in nature, and the Liffey which rises in Wicklow, flows through Leixlip and back into the sea.

“Sacred Conversation questions my role as an artist, educator, woman, mother, wife, aunt and daughter, as the observer and objectifier. Questioning these roles has become increasingly more important in my work.”

Clodagh graduated from Fine Art in DIT in 1997 and worked as a art educator within Irish psychiatric youth and adult services.

She received a Masters in Arts from NUI Maynooth in 2008, which deepened her interest in sociology, history and philosophy, now an intrinsic part of her art practice.

According to the artist, she ‘voice hears’ but does not subscribe to psychiatric conditioning and believes ‘voice hearing’ is a natural state of being.

First Fortnight is a charity that challenges mental health prejudice through arts and cultural action.

Invisible Cords by Clodagh Kelly is part of First Fortnight programme at Riverbank Arts Centre and runs at the McKenna Gallery until February 18. Admission is Free. For more details, see www.riverbank.ie.