Restrictions lifted: Publicans surprised by sudden easing of restrictions but staff and customers happy to comply with new rules 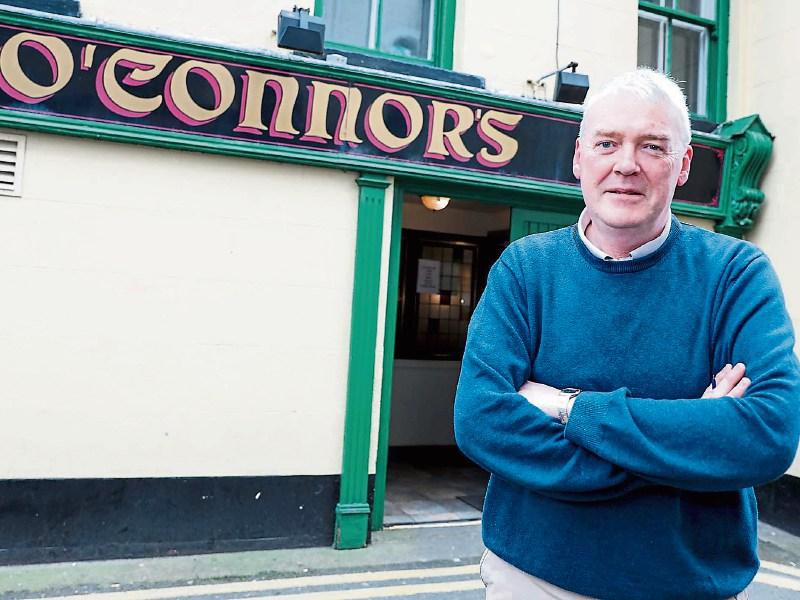 Pubs across Kildare had a mixed reaction to the sudden lifting of restrictions on Saturday morning last — but all were glad to be getting back to normal.

The pub is the closest hostelry to the Moat Theatre and Naas Town Hall, currently being re-fashioned as a library and a cultural centre at a cost of €5.9m.

Owner George O’Connor welcomed the lifting of restrictions “absolutely” adding “it was a very long time to be closed, apart from a couple of weeks, without seeing your customers.

“Nobody knew when our social lives would return to normal but there were critical financial considerations too.

“When you have a young family you are concerned and likewise concerns about your staff, some of whom have been with us for a long time.” (The family have a second pub — the Kildrought Lounge on Celbridge’s main street).

Mr O’Connor added: “This is a local pub where we get to know our customers quite well and obviously we missed the interaction.

“At times we wondered how long more it could continue.”

He acknowledges the support provided by the government for businesses, though they were no replacement for closure.

“They were certainly a help and I acknowledge that, it allowed us to keep ticking over and to keep staff on full pay for as long as we could. The assistance was welcome and the government did as well as it could in the circumstances.”

However, he was critical of the stipulation which allowed customers in if they bought a meal for at least €9. It meant pubs which couldn’t provide food couldn’t open.

“Some of the rules were off the wall. This measure did nothing for pubs that don’t offer food, like ours, and it was a measure which differentiated between businesses in the same industry.”

Mr O’Connor thanked “our very loyal customers” who not only returned once business resumed but who observed the rules about social distancing and sanitisation along the way.

“We more than appreciate our customers’ loyalty and we know most of them,” he said. 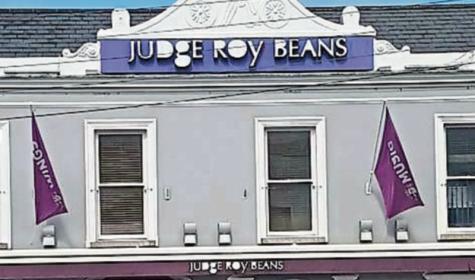 Vivian Carroll, owner of Judge Roy Beans (JRBs) in Newbridge, said that the pub enjoyed a ‘great response’ to the restrictions being lifted.

“I think both the staff and customers were a bit apprehensive at first, but there was still a sense of relief.”

He added that there was ‘a bit of confusion’ about wearing facemasks, but otherwise said that JRBs enjoyed a ‘lovely crowd’ at the weekend. “Everyone was very understanding: it’s much more streamlined now, as we don’t have to quiz our customers for names and vaccine certs,” Mr Carroll said.

Neil Farragher of Kavanagh’s pub in Naas said that the staff were ‘pleasantly surprised’ to hear about the announcement from the Taoiseach on Friday evening.

“We thought maybe the announcement would be made on Monday or Tuesday... we didn’t expect it to be this early.”

He added that while the pub was ‘manic’ over the weekend, the staff were still very happy to have things back to normal.

However, like Mr Carroll, Mr Farragher said that he was initially unsure of the rules regarding facemasks in pubs, but they eventually received clarification from The Vintners Association, which read: “Masks must be worn by staff in customer facing roles, and customers/ public can make their own decisions but wearing them (facemasks) is no longer required indoors.”

The proprietor of Nolan’s bar in Kildare town said local bars must remain cautious despite of the welcome lifting of restrictions. Peter Gibbons, who has been operating for 33 years in Market Square, said he will still be rigorously enforcing mask wearing and hand sanitising. “The lifting of the restrictions came so suddenly, we were caught unawares, but hopefully pubs will stay open from here on.

“There may be an element of throwing the baby out with the bathwater but we are glad to be open and we must work with the new environment now.

“I’m surprised that the Covid cert was abandoned, because it leaves venues slightly exposed to the virus.

“We will be leaving the perspex screens up at the bar to protect staff and customers.” Mr Gibbons said that his pub will be slowly returning to normal and is planning live music in coming days.

He added: “The regular, older customers may take a week or two come back. But we attracted a younger crowd during the pandemic and we will be doing our bestto keep them.”

In O’Rourke’s, Newbridge, proprietor Joan O’Rourke criticised the day’s notice given by the Government but hopes now that bars will be back for good.

She said: “The lifting of restrictions came as a big surprise in the end as all the messaging from the Government was that it was at the end of January.

“They could have left it until after the weekend and premises and customers could have been eased back into it on Monday and Tuesday onwards, but it’s done now. Places had to quickly try to organise staff and stock and it was all a bit rushed. Other bars were contacting us if they ran short on kegs or bottles.”

Ms O’Rourke also said that the removal of the Covid certificates was a big surprise but everybody will have to get used to it now. She explained: “There was a genuine feeling of elation and relief among customers on Friday and Saturday. “People can still wear masks and sanitise their hands and keep their distance if that makes them feel more comfortable.

“The perspex screens have been taken down from the bar but staff will still be wearing masks for the time being.”

She also said that music sessions will be returning to the bar to add to the general sense of normality. 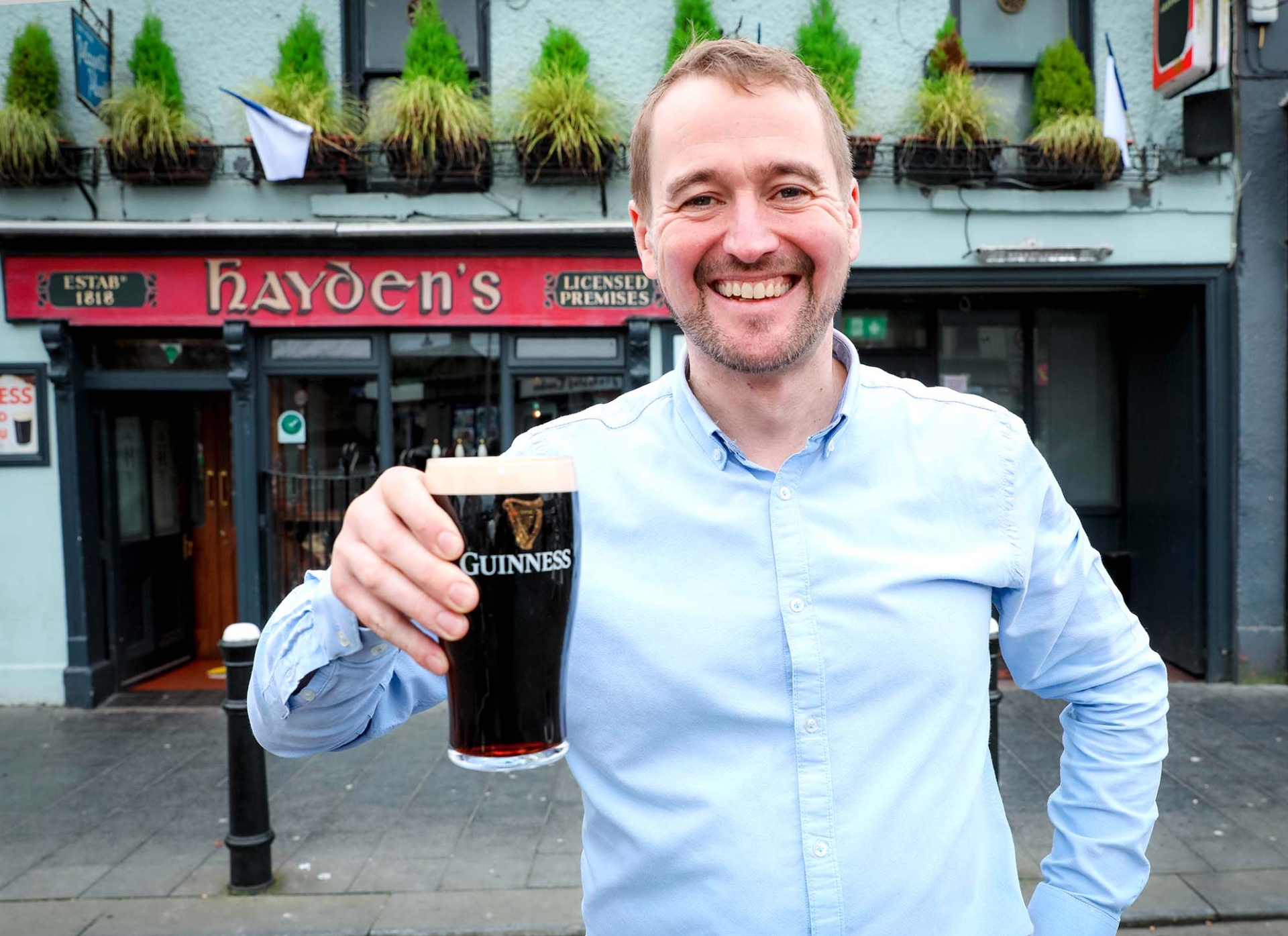 Fergal Dunne, proprietor of Hayden’s in Naas, said: “We were absolutely delighted with the news that we could reopen.

“The pandemic has been such a hard slog for the hospitality trade. Welcoming our friends back in without restrictions is just the best feeling in the world.”