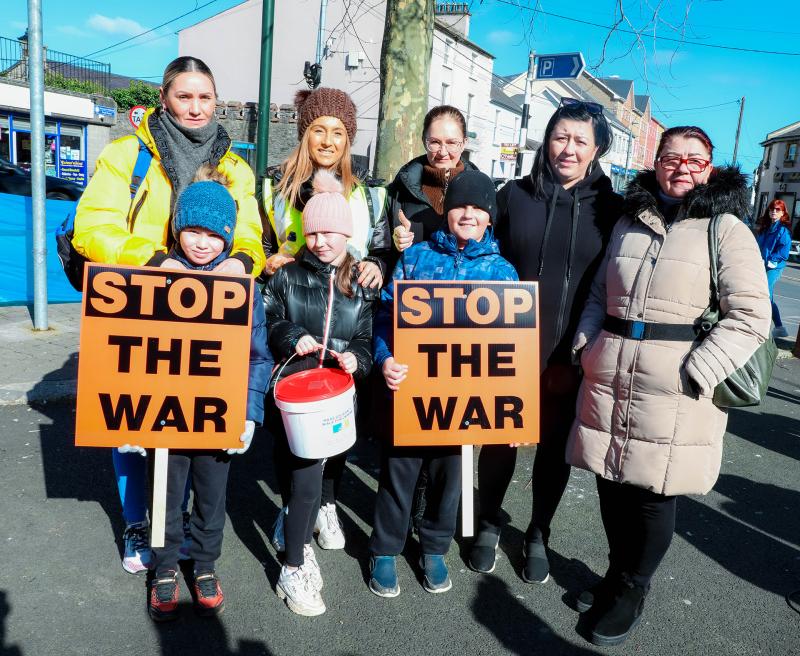 Children rescued from the war in Ukraine are already living in the Naas area, it has emerged.

A ‘Solidarity Walk’ held in Naas on Sunday was one of several events held last week around County Kildare to raise funds for charities such as the Irish Red Cross. The Naas march featured several people carrying Ukraine flags and carrying placards like ‘Stand With Ukraine’ and ‘Stop The War’.

Cllr Fintan Brett confirmed almost €20,000 was collected in the Naas area over Saturday and Sunday and he paid tribute to the generosity of the public. 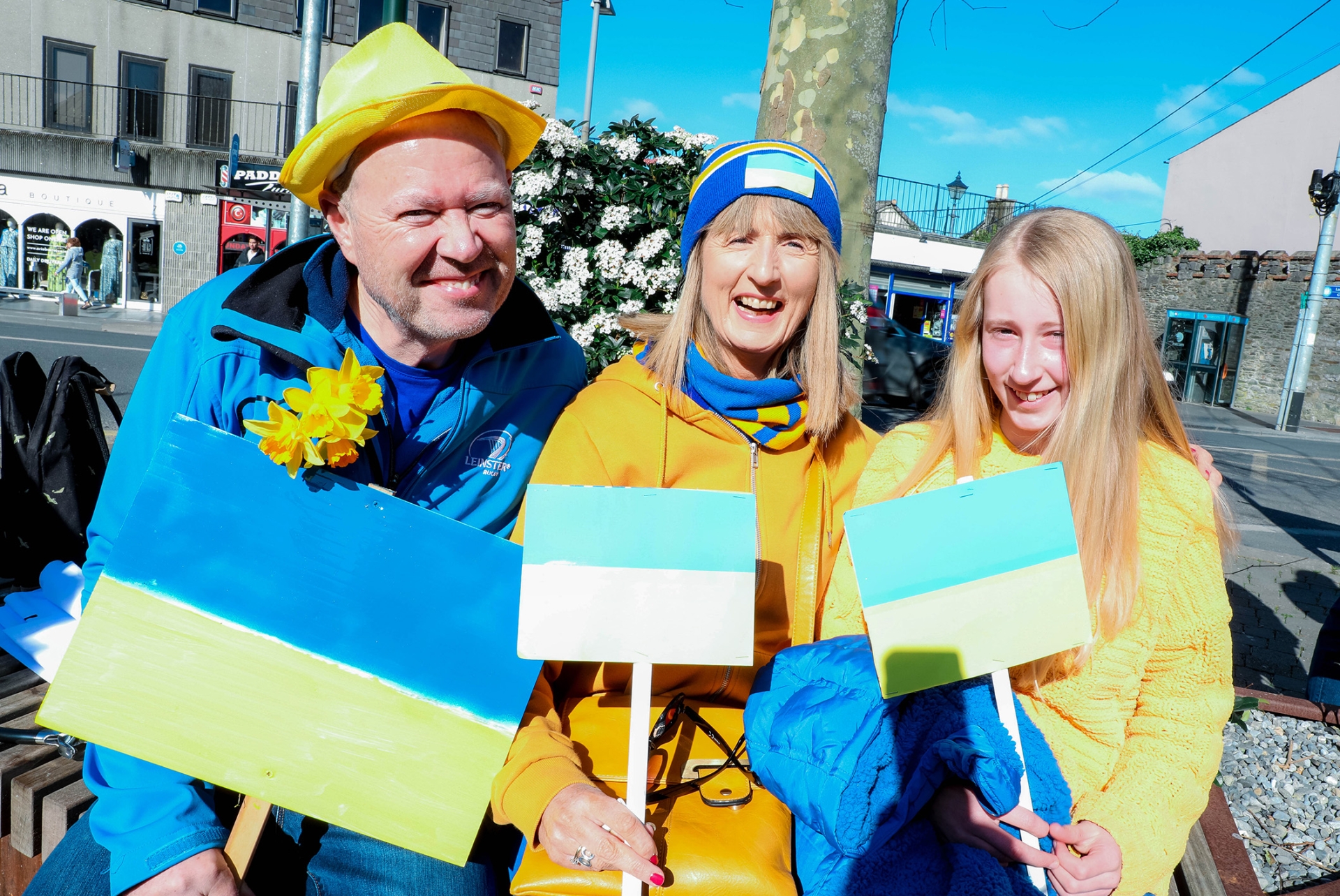 Speeches were made in Poplar Square on Sunday and the attendance, which included local public representatives, heard from a Ukranian native who gave her name as Nataliya who said she had rescued children from the Kyiv area last week.
She said: “I’m just back from Kyiv on Friday.

“I took three kids with me — they are kids of friends who are doctors who stayed to save people’s lives.

“They are from a small town called Bucha near Kyiv which is surrounded by Russian troops.

“No food or medical supplies are being allowed in.”

Nataliya said that her nephew stayed in Ukraine with his family.

She told the crowd: “Every morning we send a message to family and friends: ‘Are you alive?’ I cannot comprehend this new reality. People who try to escape from cities are simply being killed on the road. I cannot understand how humans can do this to other people.”

Urging support for her home country, she said;: “Don’t give up, stand up for Ukraine.” Natalie also thanked the local community for their enourmous generosity. She continued: “I am in Ireland a long time and I work in Naas. Irish generosity is enormous.” 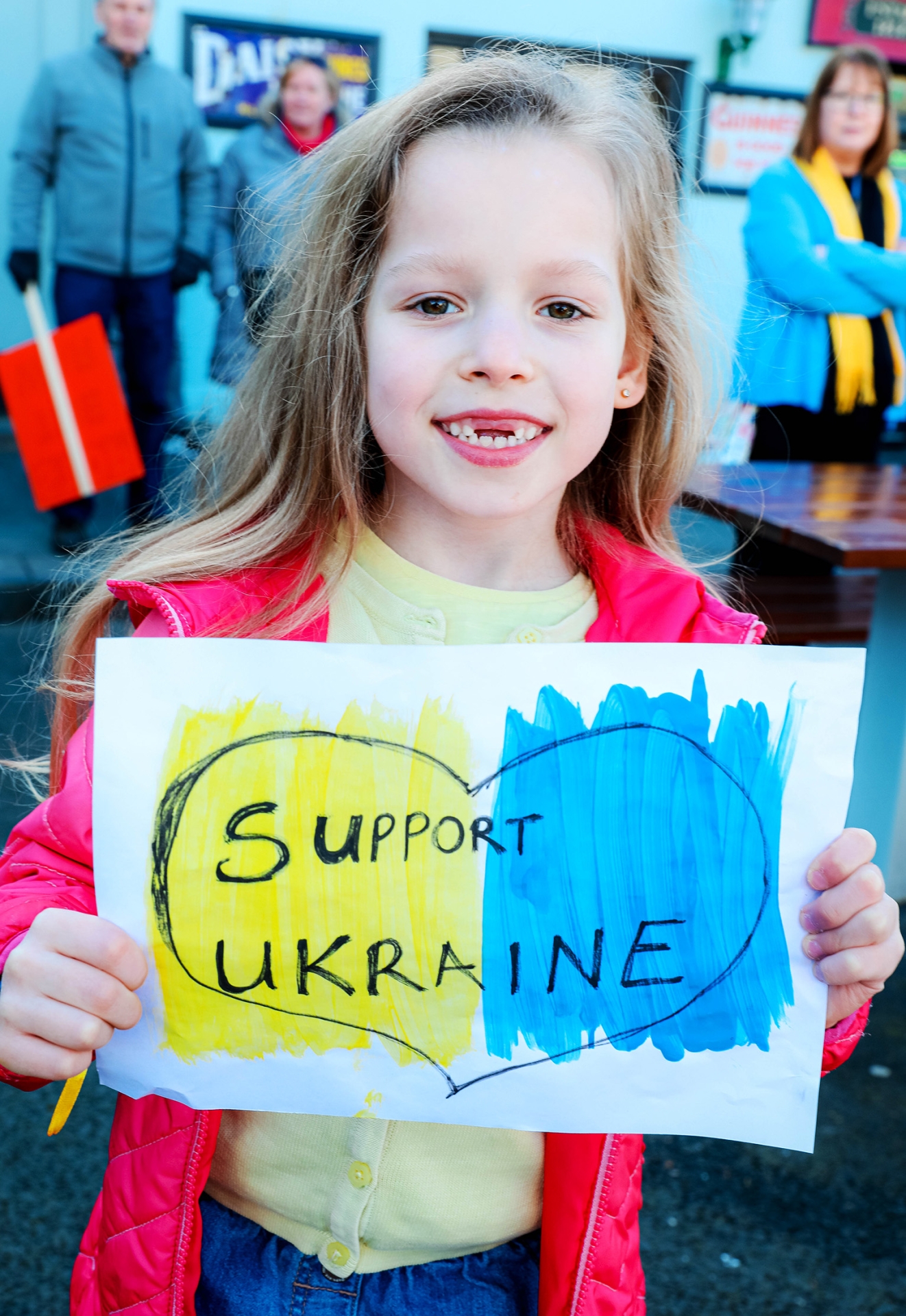 Nataliya also referred to the numbers of Ukranian refugees who will be coming to Ireland. Government estimates have already put the figure at 80,000 or higher.

Nataliya said: “You will see a lot of Ukranian people on the streets soon. They will come to Ireland to stay safe.

“But they don’t want to stay in Ireland forever, they want to go back home some day.” 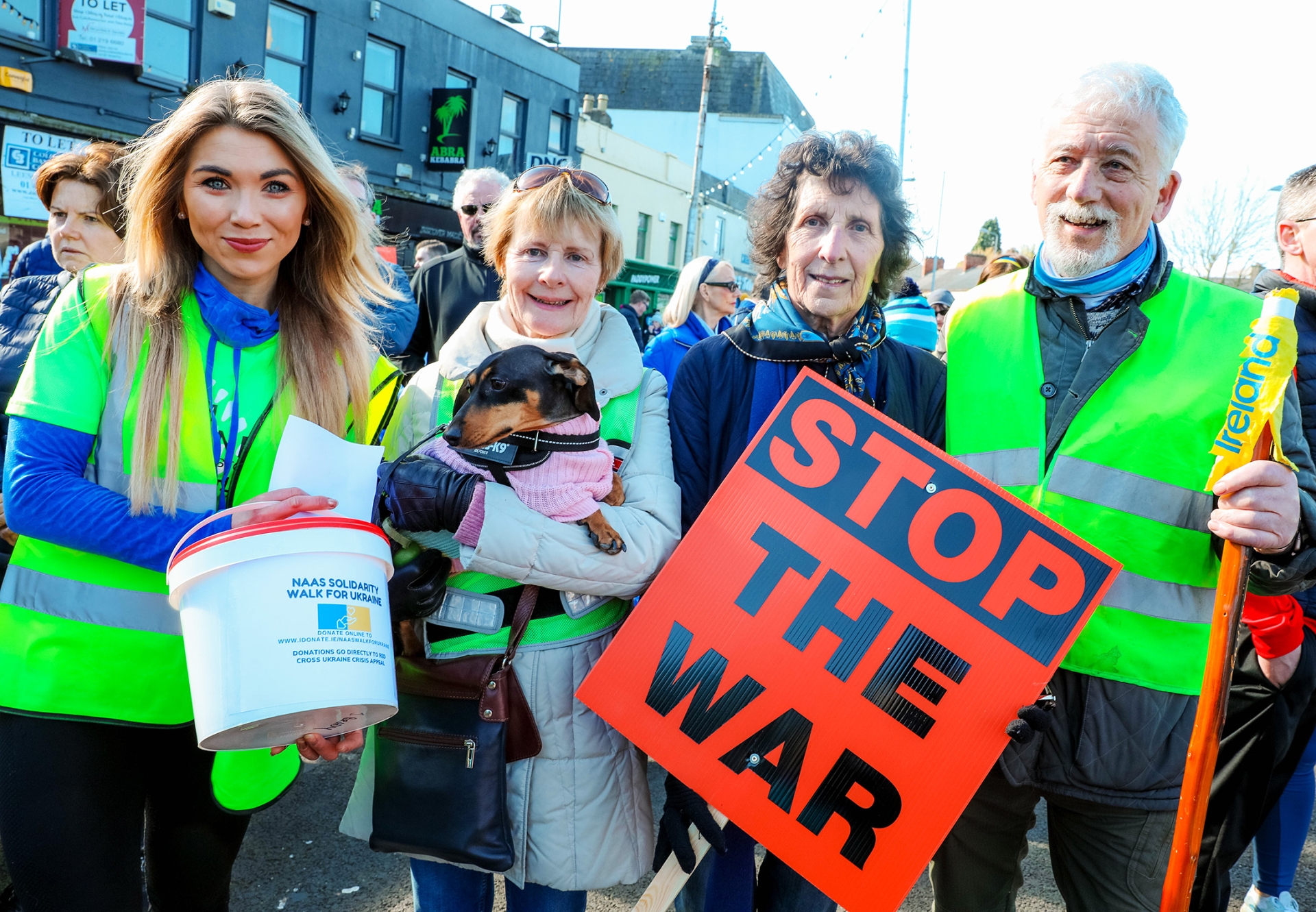 Niamh urged people to to charities such as the Irish Red Cross to help get humanitarian aid to Ukraine’s people.

Niamh said: “We are a group of people, from Naas and Ukraine affected, like us all, by the awful events now happening in Ukraine.

“We wanted to do something to help in a practical way so have set up this page to enable people in Kildare to donate money as this is the best way of getting real assistance there.”

All the money raised will go to the Irish Red Cross Ukraine Crisis apppeal.

Niamh added: “These Ukranian people are real men, women and children who are facing hardship, destruction or death. We stand in solidarity with the Ukranian people and everybody affected by this war. We will also continue to fight for peace and justice and solidarity.”
The crowd also paused for a moment’s silence for Ukraine.

Marina Trishchenko said she was “so touched” to see the large attendance at the event in Naas.

She explained: “We’re overwhelmed by the support and generosity of the community since the war broke out in Ukraine.

“This war shattered the lives of Ukrainian people but it united people all over the world. I am proud to be Irish, as much as I am Ukranian. Thank you all for everything."

In Newbridge, events were held in St Conleth’s Church and at the Liffey Linear Park in recent days. 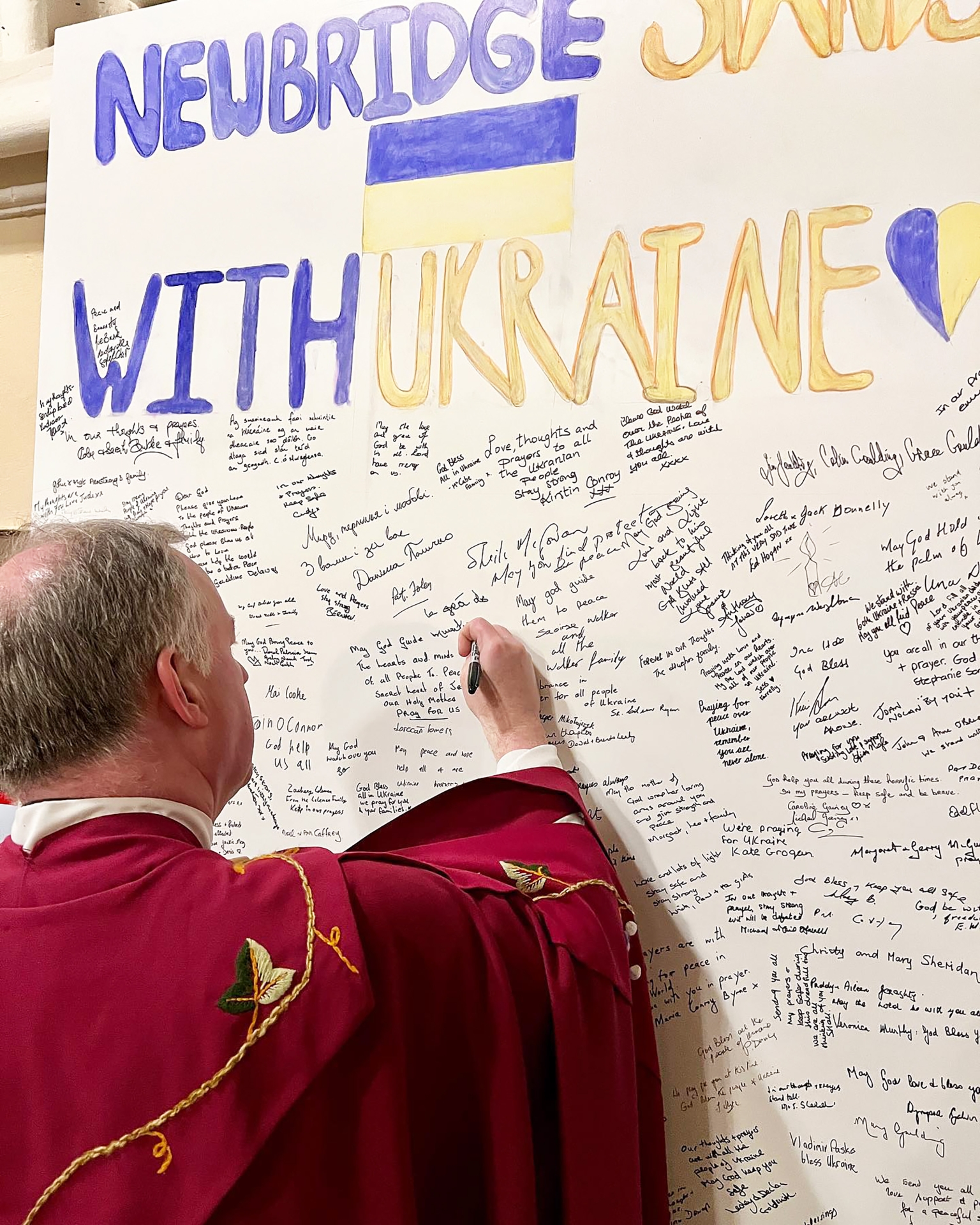 Fr Ruairí signing the prayer wall in Newbridge Parish Church, signifying a commitment to pray for the people of Ukraine and stand with them. Picture: Charlotte Vard

The charity is in contact with the Irish Refugee Protection Programme (IRPP) regarding the housing needs of thousands of people due to arrive in coming weeks.

A spokesperson said: “We will be using our Register of Pledges where we seek from the public spare rooms and vacant properties so we can help Ukrainian refugees live in our communities. 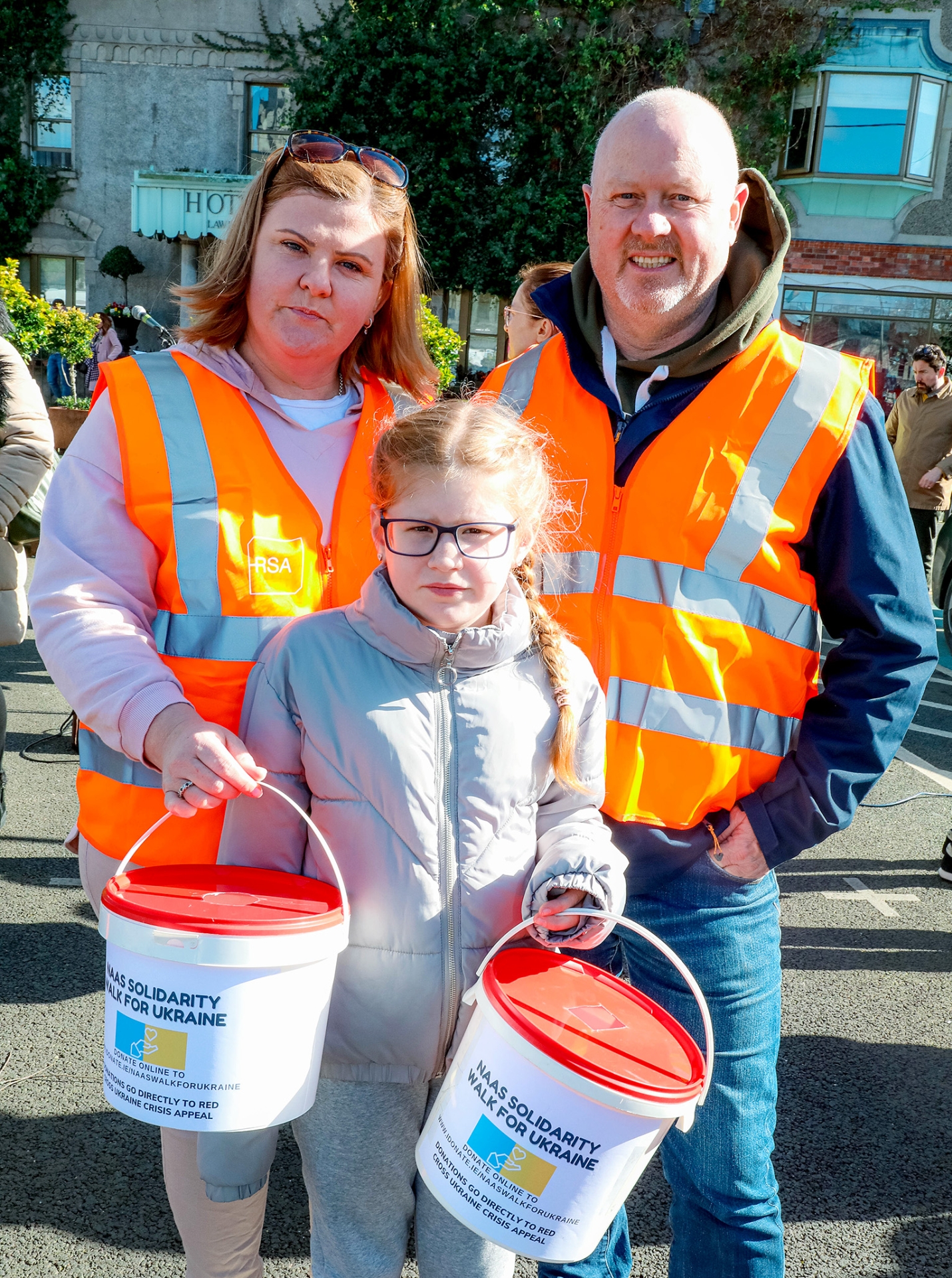 “Already over 2,000 pledges have been registered with the Irish Red Cross, 104 coming from people in Kildare.”

Anybody in a position to offer support in the form of accommodation for Ukrainian refugees is asked to register at: https://registerofpledges.redcross.ie/

A local area can also sponsor a family through the Community Sponsorship Ireland initiative. Once the conditions are met the refugee family is welcomed into the community. The Irish Red Cross has five groups in operation already with refugees from countries such as Syria and Afghanistan.

Irish Red Cross Secretary General Liam O’Dwyer said: “Part of our brief here was to build a relationship with a specific group of refugees, learning what their needs and plans were and working to match them with pledged and private rented accommodation throughout Ireland.

DONATE
Anybody who would like to donate online can do so on the www.idonate.ie at the ‘Naas Solidarity Walk with Ukraine’ page.