Local Kildare traders ecstatic to see the return of Punchestown 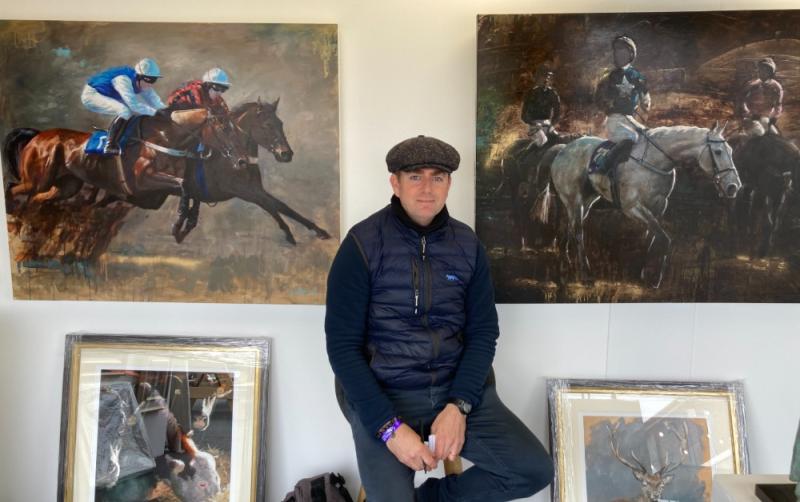 John Fitzgerald at his art stand at Punchestown racecourse

An overwhelming feeling of unity, pride and relief was felt among local traders at the opening day of Punchestown Festival 2022.

One Maynooth-based artist, who has also had a studio located in the Curragh Racecourse since 2013, said that while his business did better during the pandemic compared to others, he was nevertheless glad to be back at the Festival.

While the world shut down for the pandemic, John Fitzgerald continued his work in his studio because racing continued.

“It’s brilliant to be back because I have such strong racing connections and affection for it. The pandemic when everyone wasn’t going out, racing was still going on. It was huge for me because there were still big events going on. I was extremely lucky in that sense because people began to invest in art for their homes,” John said.

John has had artworks commissioned by some of horse racing’s biggest names and has become a leading name in equine and sporting art. As well as personal pieces, in 2018 John was commissioned to paint one of the world's most famous racehorses, Shergar, for a BBC documentary Searching for Shergar.

“I was an estate agent for a few years but now I’m glad to say that I am full time at this. We have scenes from historic venues such as Fairyhouse, Punchestown and the Curragh. Commissions are the main part of the business, owners and trainers want paintings of their winners made,” John explained.

I ALWAYS TOLD MYSELF: ‘SOMEDAY’

Another trader who expressed her delight at being at the festival was Naas woman Lynda Murphy, who runs Sonny Bear, a website selling sustainably-manufactured children’s clothes.

Previously, Lynda was employed as a social worker until 2012, when she began to care for her ill dad.

She said that today was her first time ever being at the Festival with her business, although her Punchestown debut was originally meant to happen in 2020. 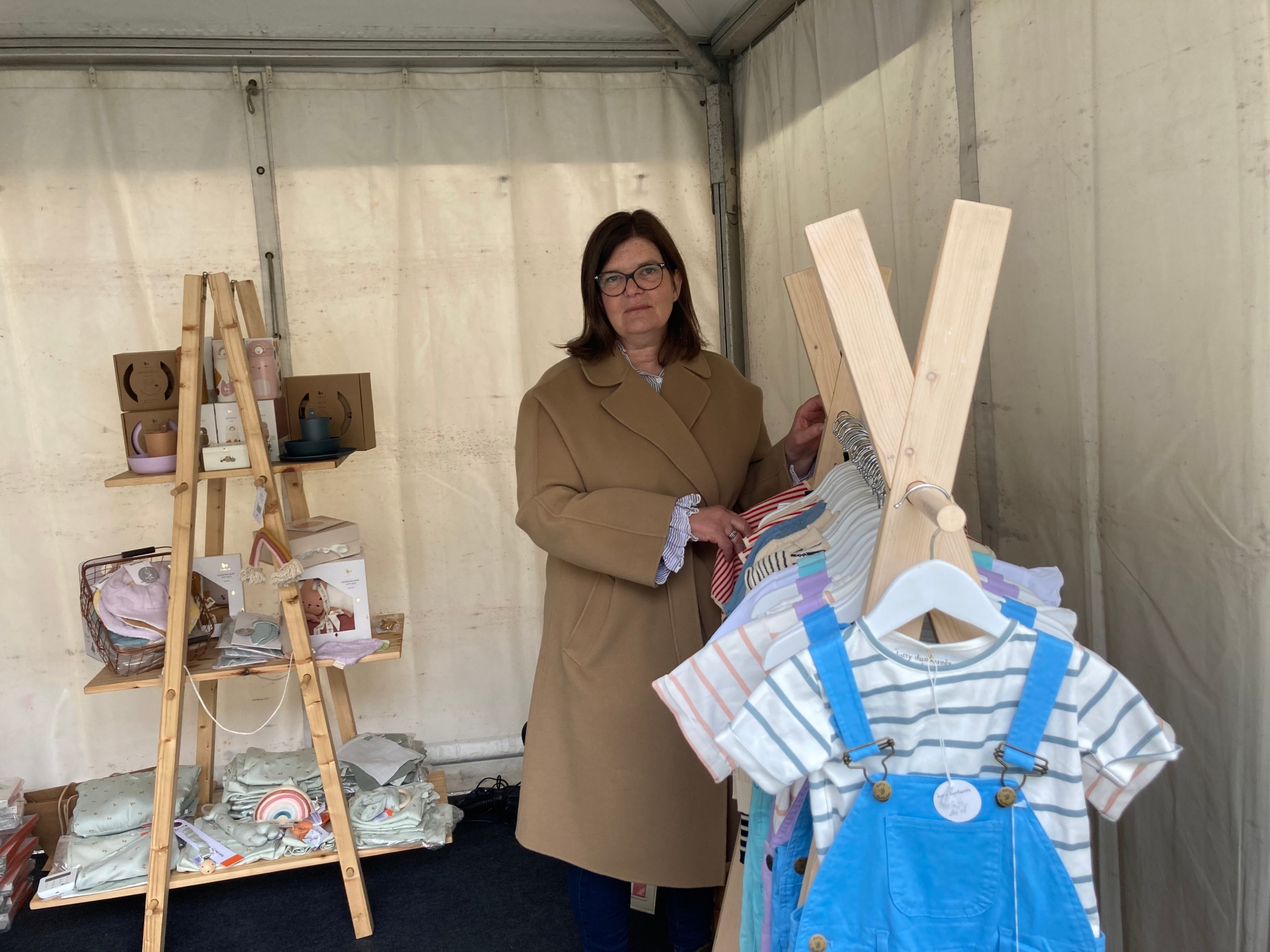 Linda Murphy at her stand at Punchestown festival

“I just wanted to get out and about and get (the shop) seen.

“There’s just no substitute for holding and feeling the products,” she added. Lynda, who has been running Sonny Bear since 2019, came up with the idea years earlier, but focused on raising her daughters before she eventually made the decision to set up the online shop.

Explaining her inspiration behind the store, she said: “I always loved dressing my children… from the time they were toddlers, I always told myself: ‘someday’.”

Lynda added that she was initially anxious about setting up the website and social media profiles for the shop, especially as she had no previous experience with IT: “There was lots of tears at the start!” she joked: “But it’s necessary, especially social media, it’s so, so important.”

Commenting further on her products, Lynda said: “Everything is sustainable, and mostly comes from female run or family run businesses in Europe, such as Spain and Portugal… there’s also a supplier from Turkey.”

“All the conditions in the factories that make the products are up to standard, and the cotton is organic.”

However, she added that implications arising from both Brexit and the rising cost of living have made getting in supplies tricky at times.

Regardless, Lynda still holds her head up high; as a longtime goer to Punchestown, she said she was excited to be back, especially with her own business.

Lynda also revealed that she had previously owned two horses, and that she doesn’t play favourites with the horses at Punchestown — ‘they’re all lovely!’ she remarked.

Also present on day one of the prestigious Festival was Catherine Bunn, sales and marketing manager at the Osprey Hotel, who have been sponsors of the event since 2019.

Catherine said that the hotel is focused on making itself known as ‘where it’s at’ before and after the track: “We have bottomless brunch or live music every night in the bar.”

In addition, Robbie ‘Puppy’ Power and Katie Walsh will be at the Osprey Hotel to offer their expert opinion on all the day’s action from 1pm.

“I’m sure that they will help make lots of winners!” she added.

Catherine also said that The High Kings will be playing in the hotel on Thursday at 7pm, while Friday will also see marquis, French tents, a DJ and a number of different bands.

She added that capacity for The High Kings concert is at 75 per cent, so she urged those who are interested in seeing them perform live to order their tickets as soon as possible.