Kildare LGFA: ‘We expect nothing but a battle against Offaly’ says manager Sean Finnegan 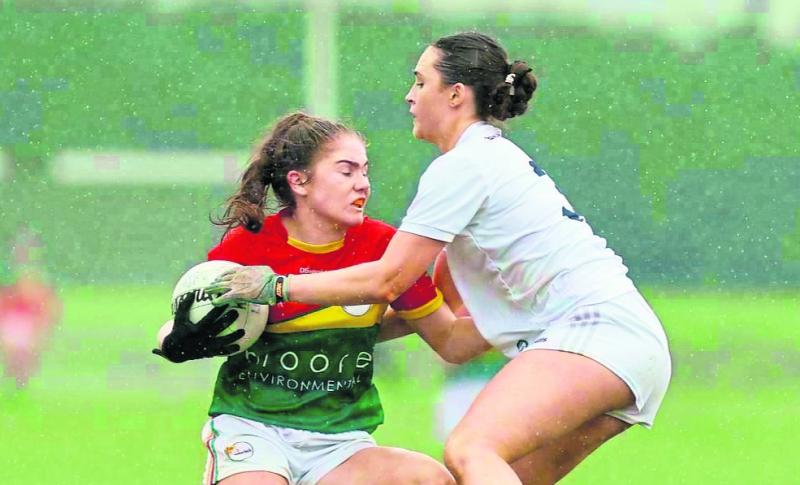 After securing a home semi-final in the TG4 Intermediate Leinster Football Championship, Kildare manager Sean Finnegan was delighted with the performance his side gave against Carlow as the much-changed side ran out 16-point victors.

Despite finishing with a flourish, Kildare were tested for a large portion of the tie by their opponents and this is something that Finnegan expected heading into the tie. “We knew what Carlow possessed, against Longford and Wexford they were very much in the game, so I certainly didn’t underestimate them,” he said.

Despite this, there was a number of changes to the Kildare starting fifteen with three Championship debuts also taking place. “I was delighted to get eight or nine girls who played very little league football out there today.”

Having won their last two encounters in this group left Kildare in the position of having secured a place in the knock-out stages prior to taking to the field on Sunday, which meant Finnegan was in a position to ‘rest a few girls for next week’ when they will take on Offaly at home in their TG4 IFC semi-final.

Having finished off 16 points clear, it didn’t always seem like this would be the case for Kildare, as Carlow looked to hold onto the tie for as long as they could.

The key point for Kildare was when they managed to hit two late goals, as their superior fitness told through.

“We were disappointed at half time to be only five or six points up,” remarked Finnegan. “We got a bit sloppy, we had to work very hard.

“We knew if we moved the ball a bit quicker and used the width of the pitch and ran at them that we had the players inside that could hurt them.”

This was never more true that seeing 1-3 come from the boot of the full forward in the space of four late minutes.

With Offaly the reward for Kildare’s three victories in this season’s TG4 IFC campaign to date, Finnegan is not underestimating the challenge that they will bring to Hawkfield.

“We will expect nothing but a battle next Sunday.”

And with knock out football on the horizon from here on in for him and his charges, Finnegan couldn’t have summed it up any better.

“We’re in real championship now, and as we saw against Roscommon, if you let the other team get on top of you there is no comeback.”

So with that in mind, all eyes go to the arrival of Offaly this Sunday in Hawkfield as the prize of a places in the TG4 Intermediate Leinster Final awaits the winners.