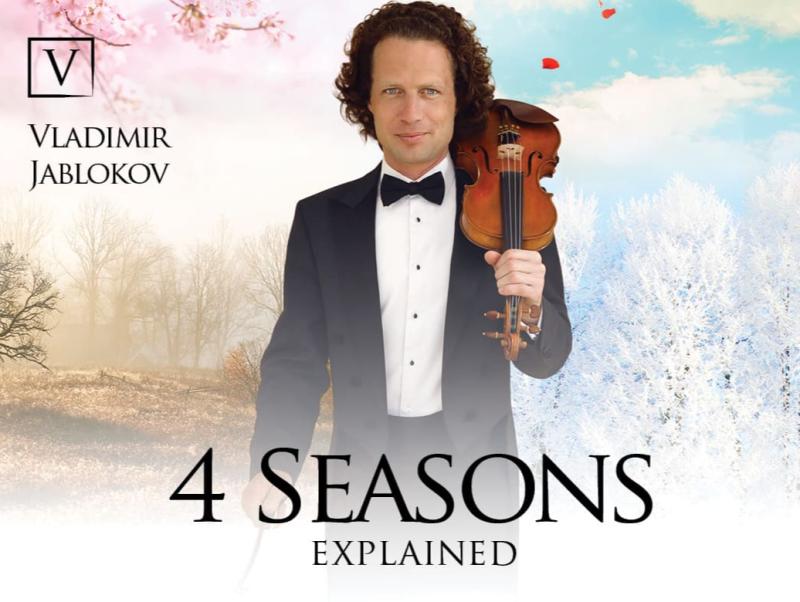 For the uninitiated, the Four Seasons is four violin concertos by Italian composer Antonio Vivaldi, each of which gives musical expression to a season of the year.

Vladimir Jablokov, who originally hails from Slovakia, will be bringing his Four Seasons Explained Tour across Ireland, including in Kildare.

Vladimir, who comes from a family made up of four generations of classical musicians and started playing violin at just five years old, first came to Ireland in 2004 and fell in love with the country.

He told the Leader: "I wanted to take a break from music, but I also wanted to prove to both myself and my parents that I could live independently, to survive on my own... although I had no English when I arrived, and it also didn’t help that I wasn’t even aware of Ireland’s climate!"

Vladimir added that when he began busking on Grafton Street during this time, he found pleasure in entertaining people with his music, and also discovered other genres of music.

Although he lives near Prosperous, he briefly considered moving back to his native country: "Before the pandemic came, my wife and I were thinking of moving back to Slovakia for a year, to see if we would settle there.

"But during lockdown, we decided that we wanted to settle here for good."

When about the making of his latest venture, Vladimir said: "There are sonnets that were published in the original Vivaldi score, that would represent or explain what’s happening in the music.

"It was very advanced for his (Vivaldi’s) time to do something like that.

He continued: "I found it quite difficult to follow and put the different sections together with the music without visualising it.

"The biggest work with the visuals was, about finding the right balance... if we went too literal and have it too busy on the screen (that shows the visuals), it would take away from the performance as well as not leave any space for the imagination of the listener."

"I feel we found the right balance and the reactions are amazing," he added.

Vladimir also revealed just how physically demanding playing in Four Seasons Explained is: in total, the vibrant and epic story is told through just two violins, one cello and one piano.

"I would say I have lost about 7kg since the tour started!" he joked: "In terms of my work out, it’s because the arrangement is only for the four instruments and I am missing other supporting instruments.

"There is no time to rest for me during the concerts, but at the same time, I really enjoy the challenge."

Vladimir added that his family has been a huge driving force for him: he revealed that he loves playing Christmas concerts, given their family-oriented nature, and he said he has lots of fond memories of being with family members in Ireland over Christmas time.

He also cited his late father, who passed away last August, as a big inspiration for the tour: "In certain ways, I do feel that playing in this tour is a bit therapeutic, especially since my father had such a big input in the making of Four Seasons Explained.

Special day for children and families

"He would have loved the idea of bringing this idea and making it accessible to others. I feel like the tour is not only entertaining, but is also a very human story too."

Vladimir also admitted that he did not fully understand Vivaldi’s original piece until he was well into adulthood: "I know that if I had seen something like this (his tour) when I was 10 years old, I would have enjoyed the original piece more compared to the first time I experienced it."

"It’s not easy to read old sonnets written in such a poetic language and put it with music as it is being played," he added.

Once Four Seasons Explained concludes, another grand venture awaits Vladimir: he will host his biggest production to date to be staged at the 3Arena on December 18, 2022.

The latter half of Four Seasons Explained will also feature some of the most popular pieces in Vladimir’s repertoire, including Brahms’ Hungarian Dance No. 5, Blue Danube, Strauss’ Radetzky March, Theme from Schindler’s List, If I Were a Rich Man and more audience favourites.

Four Seasons will play at the Moat Theatre in Naas on Thursday, June 9.

Tickets for the tour can be booked on www.vladimirmusic.com.