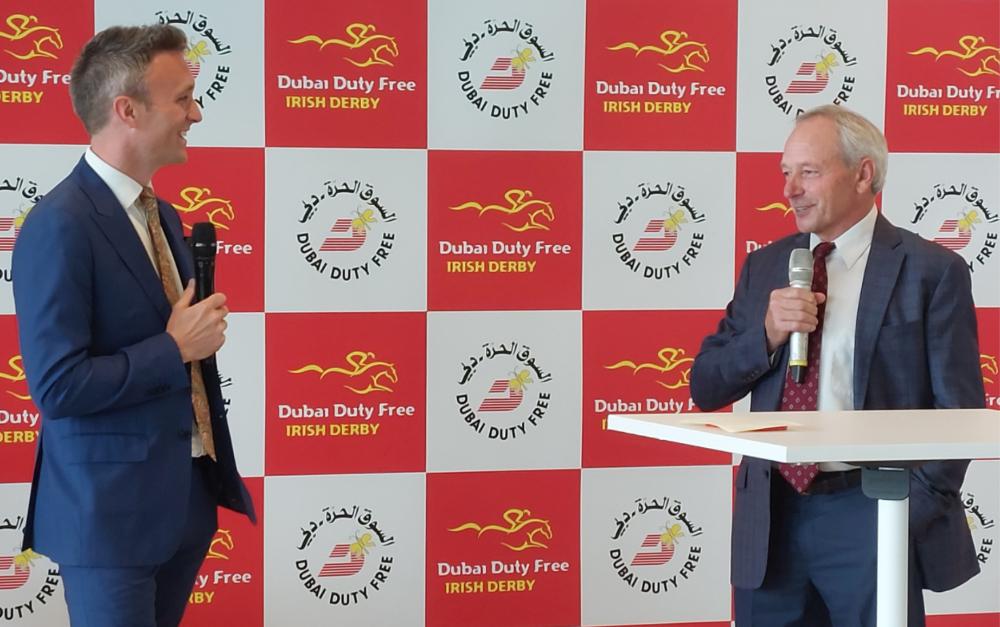 The much-anticipated return of the Dubai Duty Free Irish Derby 2022 was met with much fanfare earlier today at its official launch in the Curragh Racecourse.

Only 1,000 people were allowed to attend the 2021 Derby, but this year’s iteration will see the return of the more conventional, and much more sociable, atmosphere commonly associated with the race weekend.

Ms Eade said, “It’s amazing that we have something with the Curragh that we are really proud of, particularly with the international interest on the racetrack… it is only fitting that, to accompany the finest turf in the world, we now have the facilities to go with it. “People can come, have a great day and enjoy some of the best flat racing there is in an incredible venue.”

However, the guest of honour for the launch was Derby winner from 1989, Steve Cauthen, who scooped victory on board Old Vic.

“The Curragh is one of the best courses in Europe and it is a very fair track, the best horse typically wins around here. I had a great feeling that I was going to win the Derby the night before because I knew how good Old Vic was,” Mr Cauthen recalled.

Even prior to Hall of Fame induction, Mr Cauthen and Old Vic were going to be part of the Curragh forever as the pristine all-weather gallops on the tracks are known as The Old Vic gallops.

The gallops were created following a donation from Old Vic’s owner Sheikh Mohammed.

Mr Cauthen wasn’t the only Derby winning jockey present as Johnny Murtagh, a three-time Derby winner spoke about the prestige of the big race, “There has been a break but the Irish Derby used to be the benchmark for three-year-old horses in Europe with the English and French coming over.

“Aidan (O’Brien) and how strong he is, maybe, they have been afraid in recent times - but there is great racing and huge prize money on offer so that international interest is starting to come back up again and we want to get the Derby back to being that big race it was.”

ohnny’s wife Orla Murtagh, who is also chair of the Kildare Derby Festival committee, also spoke at the event, pointing to the far-reaching legacy of Old Vic, as well as the importance of the Derby in the wider context of Ireland.

She said: “Since we are such a small country, we sometimes underestimate the great things that we have, and the power that we have throughout the world.

“I love to see the next generation coming together for the Derby, along with the older generation and those abroad visiting it.”

Following the guest speakers, Mr Cauthen was presented with a pristine collection of Tipperary Crystal by CEO of Curragh Racecourse,, Brian Kavanagh and Tara Buick, the marketing manager for Curragh Racecourse.

Commenting on the launch after the presentation, Mr Kavanagh told the Leader that he was delighted to be able to bring the Derby back to its full capacity.

He also said he was very proud to have Steve Cauthen as a special guest for the launch, describing him as ‘a legend of horseracing,’ and added that he was ‘delighted’ to see the turnout at the launch.

“I’m looking forward to welcoming people back to this year’s Derby; there will be something for everyone,” Mr Kavanagh said.

The Kildare Derby festival runs from Saturday June 18 with the Curragh Derby cycle kicking off the events and running through the Derby weekend with various events until Sunday June 26.

The Dubai Duty Free Irish Derby festival begins Friday June 24 and runs until Sunday, with the big race, The Irish Derby on at 3:45pm on Saturday. Each race day will be followed by a live musical performance from The Blizzards on Saturday and a Queen tribute band on Friday.

Pictured above is Thom Malone and guest of honour Steve Cauthen.