Man jailed for six months for having hurley with knife attached 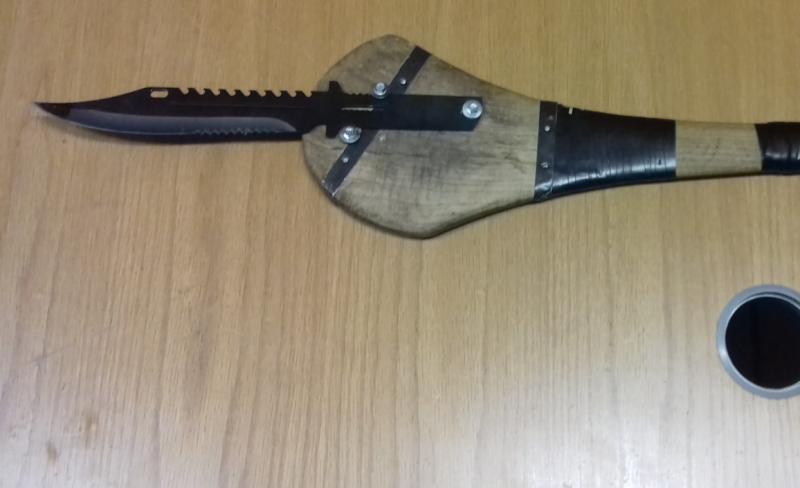 An Irish man has been jailed for a total of six months for a number of offences, including having an offensive weapon, handling stolen goods and public order.

Adam Maxwell, 25, with an address given in court as 12 Yewston, Nenagh, Co Tipperary, pleaded not guilty to a charge of threatening, abusive and insulting behaviour at Nenagh Garda station on August 8, 2019.

The court heard Mr Maxwell came into the station looking for a particular garda.

There were other people in the public office and he was asked to wait outside.

He went out but came back in and said the garda he was looking for was a “kiddie fiddler”.

He was asked to leave and he did.

Mr Maxwell’s barrister, Eleanor Power, said that Mr Maxwell would not be giving evidence but he would admit he was agitated at the time.

However, he denied calling the garda a “kiddie fiddler”.

Judge Mary Cashin convicted Mr Maxwell, saying it was the “lowest of the lowest accusations”.

"For you to go into a public space when there were people present and utter the words you did was not acceptable and reprehensible," she said. "It can have a great effect on the victim."

She jailed Mr Maxwell for three months, consecutive to a five-year sentence he was given earlier in Nenagh Circuit Court.

Mr Maxwell also pleaded not guilty to having possession of a jacket valued at €229.95 that had been taken from DV8 on Pearse Street, Nenagh, on November 1, 2019.

The court heard a shop assistant observed Mr Maxwell wearing the jacket later that day and called the gardaí.

Garda Garrett Ryan said Mr Maxwell told him he had “bought the jacket in good faith”. However, he would not say who he had bought it from.

Shauna Tooher, manager, DV8, Nenagh, told the court that Mr Maxwell had been in the store earlier that day with another individual and had tried the jacket on.

He had left the store without the jacket, but was observed wearing it later.

Ms Tooher said that they had only six of the jackets in stock and one was missing and had not been sold.

She told Ms Power she had identified the jacket as theirs because of the security tags and the scanning code.

However, Ms Power said the tags had not been produced in court and Mr Maxwell had bought the jacket for €100 “in good faith”.

Judge Cashin said she was satisfied Mr Maxwell knew the jacket to be stolen and sentenced Mr Maxwell to three months in jail, consecutive to the three months already imposed. She suspended the sentence for two years in his own bond of €100 on condition he comply with the probation services, attend all appointments and follow all recommendations.

Mr Maxwell pleaded guilty to possession of an offensive weapon at Silver Street, Nenagh, on December 12, 2019.

The court heard Mr Maxwell was found with a hurley that had a knife and a blade screwed to the end of it.

He told the gardaí it was for his “protection”.

The court heard Mr Maxwell was stressed and appeared to be under the influence.

Judge Cashin described the weapon, which was produced in court, as a “very serious instrument”.

She jailed Mr Maxwell for six months for possession of an offensive weapon, with three months suspended, making it a total of six months for all offences.

The court heard that Mr Maxwell had 46 previous convictions, including theft, firearms, sale and supply and possession of drugs and dangerous driving.

Ms Power  told the court that her client had two children aged four and two years, and that he had limited contacted with them since he entered prison.

He was on a variety of medications which had since changed and was seeing a psychologist and a psychiatrist before he went to jail.

Mr Maxwell suffered from ADHD and was bipolar, she said.

Ms Power told the court her client had left school at 15 years but had completed a FETAC course since. He was attending school in prison and was doing a Gaisce award programme which involved volunteering.

He was also attending an anger management course and a drug awareness course.

Mr Maxwell brought an action under the Police Property Act to have €835 seized from him by the gardaí returned.

The court heard the gardaí believed the money was from the proceeds of the sale of drugs as they had found evidence of drug dealing on one of the phones.

Ms Power told the court that Mr Maxwell maintained the money came from three different sources - he had won some of it in a casino in Limerick, his mother had given him €1,100 in cash and some of it was his social welfare.

Mr Maxwell had the tablets as he suffered from ADHD and anxiety, she said.

Judge Cashin said she could not understand the application as Mr Maxwell had previously pleaded to possession and sale of supply of drugs.

Rejecting the application, Judge Cashin directed that the money be given to local charity CARMHA.