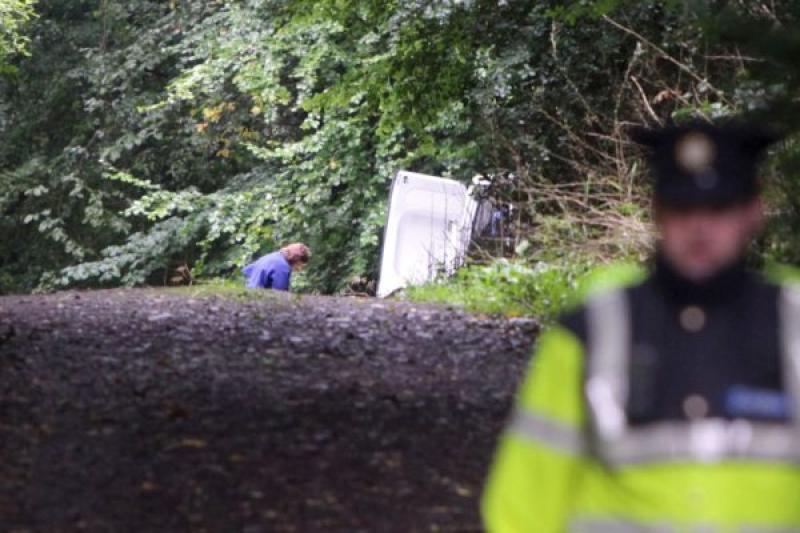 A dog walker has told the trial of Stephen Penrose, who denies decapitating his friend and burying him in a shallow grave, that he saw "meat or flesh" when he used a stick "to root" around "a heavy briary" area of a Kildare woods near the Offaly town of Edenderry.

"I knew there was something in there that shouldn't be in there," Mick Kelly told the murder trial at the Central Criminal Court today.

Mr Kelly, who lives in Rahin, told Brendan Grehan SC, prosecuting, that he took his two dogs Bobby and Jack for a walk in Rahin Woods at 8.10pm on September 2 2016. Bobby is a six-month-old Husky and Jack is a Terrier, he explained.

The witness said he had driven to Rahin Woods in his jeep and parked at the barrier, which was locked. He went in at the church and walked the loop around the forest with the two dogs, staying on the track. "I never have the dogs on the lead, the dogs do their own thing," he said.

Mr Kelly said he was getting towards the end of his walk when the two dogs "went off into a bushy and heavy briary" area.

"You wouldn't walk through it. I was calling them to come back and they wouldn't come back. I had to go and see where they were," he told Mr Grehan.

"Bobby was barking big time and so was Jack. I found them about 50 yards close to the church site further into the forest. They were jumping around, I couldn't stop them," he said.

The witness said he saw "something sticking out of the ground like a plant".

Mr Kelly said he always brings a stick with him and has a dog lead on his shoulder when he walks the dogs.

"I stuck the stick in it. I thought it was a bit of an ash tree root. I used the stick to root in behind it. I knew there was meat down there somewhere causing the dogs to bark. I saw meat or flesh on the stick when I put it into the ground and knew there was something in there that shouldn't be in there," said the witness.

Mr Kelly said he rang his brother Tom Kelly but he didn't answer. He then walked out of the woodland track and placed a big stone at the edge and hung a dog lead on the shoulder of a branch to mark the spot.

The witness said he also rang Leixlip Garda Station at 8.29pm but could not get through.

As Mr Kelly was walking back towards the road, he saw two men coming in his direction and recognised their voices. "They go shooting together, they knew something was up. I told them I thought I had found a body. I was a bit spooked," he told Mr Grehan.

He brought the two men to where he saw what he believed to be a bone and flesh. One of the men rang 112, said Mr Kelly, and they stayed until gardai arrived at the scene.

He agreed with Mr Grehan that it was bright when he had started his walk that evening but was dusky by the time that the remains were found.

The trial continues before Mr Justice Owens and a jury of eight men and four women.

On Monday, Mr Penrose dispensed with what was his second legal team. However, later that day the accused "re-engaged" his solicitor Mr Michael French and junior counsel Mr Eoghan Weldon BL to represent him at trial.

On Tuesday morning, Mr Justice Alexander Owens informed the jury that Mr Penrose had "once again dismissed" the services of his legal team, which he said was not a matter relevant to their consideration.

Mr Penrose is continuing to decline to attend his trial, which is in its fourth week at the Central Criminal Court.