"There are no showers, no exercises, no anything," Governor Anthony Harris told the court. 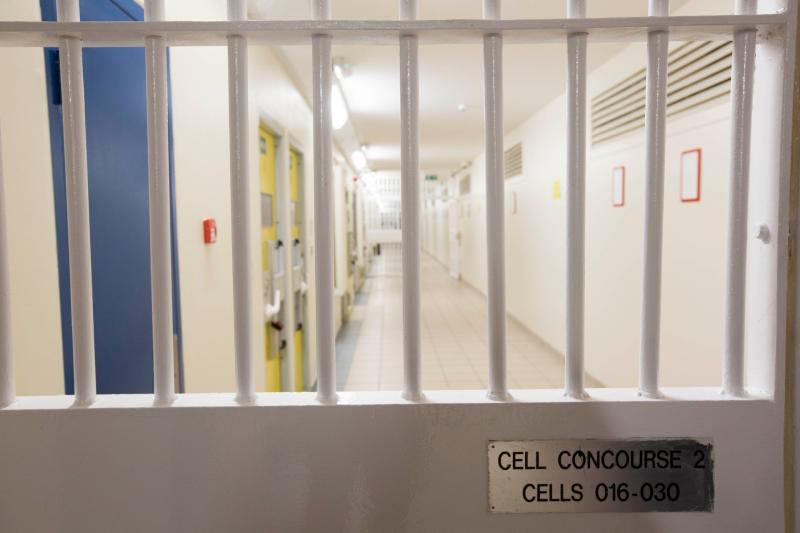 The governor of Cloverhill Prison has told a High Court judge that the prison service has entered a "silo mentality" amidst serious outbreaks of Covid-19, with no inter-prison transfers happening and his own prison not producing prisoners to "any court in the land".

Governor Anthony Harris said the "majority" of Cloverhill has closed down, with all but essential service prisoners "behind doors" due to "a serious outbreak" of Covid-19.

"There are no showers, no exercises, no anything," Governor Anthony Harris told the court.

The court was also told that the Midlands Prison in Portlaoise and "one element" of Mountjoy Prison are also affected with Covid-19. Wheatfield Prison is a "sterile prison", the court heard.

On Tuesday, Mr Justice Paul McDermott invited a senior Prison Service member to attend the Central Criminal Court today to clarify the ongoing disruption to criminal cases due to Covid outbreaks in the prisons network after a prisoner could not be produced for trial on Tuesday.

A senior counsel told the court on Tuesday that it was his understanding that Cloverhill Prison, where his client had been remanded to, had been locked down due to Covid testing and his client could not be produced by the Irish Prison Service for trial.

Addressing the governor of Cloverhill Prison via video-link this morning, Mr Justice McDermott said the named prisoner's case has been listed for trial and the court was anxious to get the case on. The judge asked the witness what was the prisoner's potential availability for attending court.

Governor Anthony Harris said there had been a "serious outbreak" of Covid-19 in Cloverhill Prison and there were a number of positive cases within the prison population.

"The majority of the prison is closed down except for some small pods of prisoners providing essential services of sanitation and in the kitchen. Everyone else is behind doors, there are no showers, no exercises, no anything," he explained.

The governor said that mass testing is taking place on prisoners and staff in the prison. Staff who are asymptomatic contacts are "the danger" to the prison, he said, and explained that when anyone comes into Cloverhill Prison they must go into quarantine.

"As reflected in the community, we have a lot of staff that are coming back positive so for me to produce [the named prisoner] today, I cannot guarantee the staff bringing him to court won't affect him. We need to get to a point in the prison where we can declare certain parts of the prison sterile," he explained.

Cloverhill Prison, he stated, was not producing prisoners to "any court in the land".

Governor Harris said it was not possible to produce the named prisoner without endangering him [the prisoner] and the rest of the prison population. He emphasised that it was the prison staff that were the danger and not the prisoners themselves.

"Unless [the named prisoner] could be released on bail, the chances of his trial getting on in the next two weeks are highly unlikely," he pointed out.

Mr Justice McDermott asked the governor if Cloverhill Prison was the only prison in this situation. "No, Midlands Prison in Portlaoise and one element of Mountjoy Prison," he replied. He added that Wheatfield Prison is a "sterile prison".

The governor said that when there are positive cases the policy is to lock down the prison and try to contain the infection as there are triple cells in Cloverhill Prison and therefore the potential for a mass outbreak is acute.

The judge asked the governor if he could remand the named prisoner to another prison. The witness said there were no inter-prison transfers happening, saying: "Everybody is in a silo mentality in trying to protect their own prisons".

The witness said there were outbreaks every two or three hours with staff ringing the prison to say that they have had a positive test. "We have a high level of positivity and are not giving out specific numbers unless necessary," he said.

When asked by the accused's senior counsel if particular consideration could be given to the named prisoner, the governor said he had rang the chair of the hygiene programme within the prison this morning to see if the named prisoner could be placed in a bubble with staff who had already tested negative for Covid-19. "The answer received was no because that person could be a close contact," he said.

The governor said that if he was ordered by the judge to bring the accused to court then he would but because prisoners are mixing in pods the accused could be reinfected. "It would mean him being brought to court in full PPE (personal protective equipment), like you see in hospital. The hygiene control team said it is not safe to bring him to court," he said.

The witness said his fear as governor of the prison is that 67 other cases "did not get on today" and "questions would be asked" as to why all of these other cases were not being placed in a bubble.

The governor said that Cloverhill Prison was not applying a "blanket policy" for the sake of it and it was a protective measure. He asked the court if part of the accused's trial could be conducted by video-link.

Counsel for the accused said it was very important that the defence team could speak to their client. "I would have great concerns for cross-examination or dealing with the substance of the case by video-link," outlined the barrister.

Mr Justice McDermott said he would not make an order for the production of the accused and asked the governor to reflect on what had been heard today as the court was anxious to afford him a trial. The case was put in for mention on Friday.

Ultimately, Governor Harris said it was down to him to make a decision regarding the named accused but if there was any breach of PPE then that would create "immense difficulties" in Cloverhill Prison. "This will be the only prisoner in an outbreak that has attended court since March 2020 and that needs to be taken into account," he said.