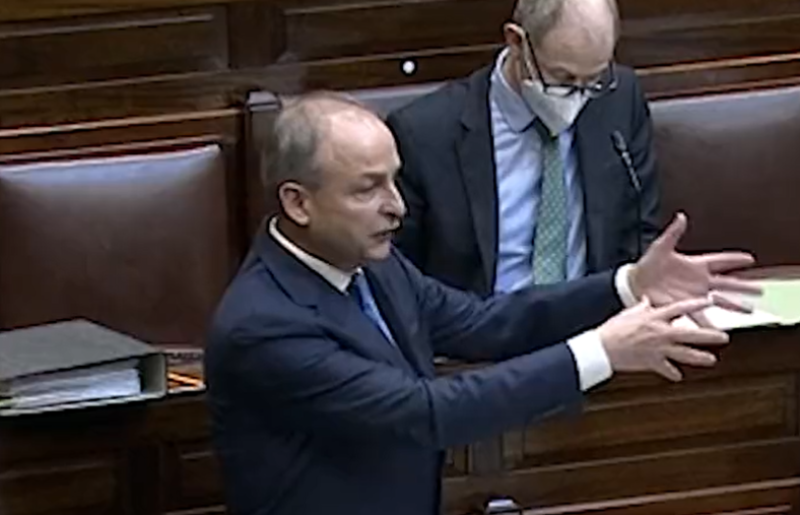 During leaders' questions, Mr Kelly challenged the Taoiseach on a conversation he said the two had on Tuesday.

He continued by saying that Deputy Aodhán Ó Ríordáin had also been very concerned and that Mr Kelly had talked to the Taoiseach after the leader's questions.

According to Mr Kelly, when he asked the Taoiseach about teachers and "the five-day rule", he was told that teachers are exempt.

He continued that there was confusion amongst the public about the public health restrictions and said that the government were "sleepwalking into another lockdown".

He called for support for workers, extending the booster campaign to other frontline workers and clarification about the use of antigen tests in schools.

He also called for free antigen tests to be provided until January and an education campaign to be put in place for their use.

The Taoiseach responded that he had been in the house longer than Mr Kelly and that he had learned something about him yesterday that would "govern" their relationship going forward.

"I learned something about you yesterday that I will not forget and that will govern our relationship from here onwards. In terms of the engagements, I've never seen the likes of it before in terms of what transpired here," said the Taoiseach.

The Taoiseach continued by saying that he had not been asked about household contacts, to which Mr Kelly responded:

The Taoiseach said he had spoken to Mr Kelly by phone about Tweets on social media from the Labour party, which Mr Kelly described as "roaring and shouting".

However, the Taoiseach did agree that Mr Kelly had a point regarding a public health campaign on the use of antigen tests but said antigen testing was not a "silver bullet".

"You are also the Taoiseach that said the banks weren't bailed out, and your threats and roaring down the phone and threats in here don't bother me. I'll let the public decide what they believe, and I think we already know."

He reiterated his request for free antigen testing for the public until January and boosters for educational workers.

He concluded by calling on the government to consider using private hospital beds again to relieve the pressure on the HSE.

The Taoiseach accused Mr Kelly of "being populist" and wanting to give boosters to everyone.

When Mr Kelly said he was referring to teachers, the Taoiseach said:

"Keep your voice down and calm it down; cool it."

He said the groups receiving the booster currently were based on NIAC advice.

He also said that beds in private hospitals are already in use by the HSE and that capacity would be expanded.

The exchange ended there.

It was the second annual event for the school