WATCH: Garda chief urges public 'to be patient' as they make their way to Ploughing 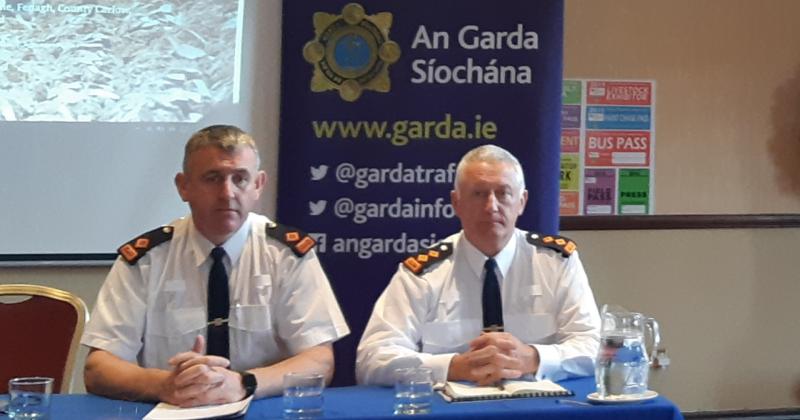 Chief Superintendent Dominic Hayes (right) with Superintendent for Carlow, Aidan Brennan (left), at the launch of the Traffic Management Plan for the 2019 Ploughing Championships in Carlow

Chief Superintendent for the Carlow/Kilkenny Garda Division, Dominic Hayes, has urged the public "to be patient" as they make their way to the 2019 Ploughing at Ballintrane in Fenagh.

Read also: Get all the latest info on the ploughing championship preparations on

Chief Supt Hayes was speaking as he launched the Traffic Management Plan for the event which is expected to attract over 300,000 people to the county from September 17-19.

He said: "The Ploughing is a major policing challenge and the operation involves around 330 people everyday to make sure people arrive in a safe manner.

"I'd ask the public to be patient with us. It's the first time it is in the area. There may be hold ups along the routes but be patient, everyone will get there. The site is the biggest it has been so far at almost 100 acres."

He added: "The policing operation is just one aspect to it, it wouldn't be possible without the support of the local community.

"The plan that we have will work. People need to travel the routes identified and take the advice of the Gardaí that they meet."

People are also being encouraged to make sure they know their route according to the plan and not to follow their Sat Navs.