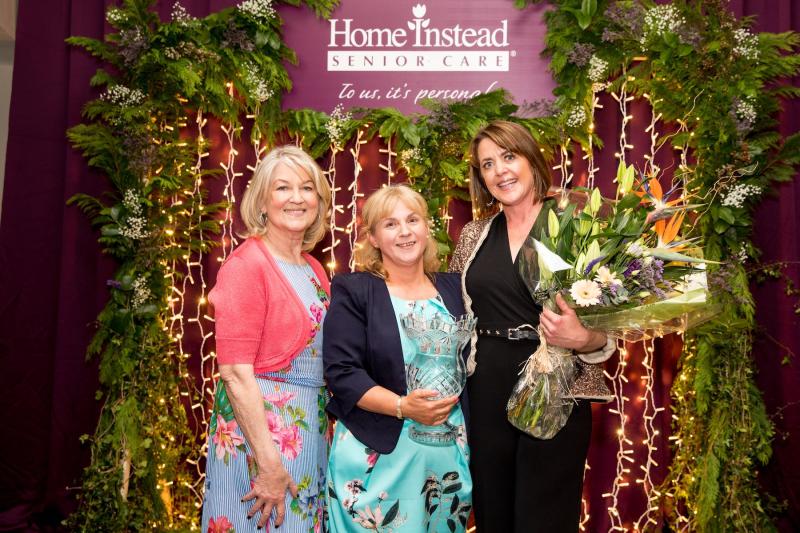 A Kildare woman was honoured for the care she gives to local older people as part of Home Instead Senior Care’s CAREGiver of the Year Awards in Dublin.

Brigid O’Callaghan, from Naas in Co Kildare, was selected as National CAREGiver of the Year at the award ceremony, which took place at the Royal Marine Hotel in Dún Laoghaire, Co Dublin on Saturday May 18.

“Brigid has been part of our team of CAREGivers for almost five years now. In that time, she’s provided care to 46 families, and she continually goes above and beyond with each and every client. We are so proud to see her hard work and dedication recognised through these awards,” said Amanda Bohan, Owner of Home Instead Senior Care Kildare / Laois.

Brigid, who was also named as Leinster CAREGiver of the Year, received the awards for the consistently high quality of senior care services she delivers to local communities in Kildare. She is regarded as an “outstanding CAREGiver who always goes the extra mile for people”, her colleagues said.

Before inviting Brigid to the stage to collect her award, Home Instead Brand Ambassador and former broadcaster Thelma Mansfield described the positive feedback she receives from local health professionals, clients and colleagues.

“She specialises in Alzheimers and Dementia Care and is universally loved by all in her office,” said Thelma Mansfield.

Home Instead Senior Care is Ireland’s largest provider of private home care services and is also an approved care provider for the HSE.

“These awards give us the opportunity to recognise the tireless work that our 4,000-strong team of CAREGivers deliver to clients all over the country, 24 hours a day, 365 days a year,” said Shane Jennings, Director of Franchise Operations at Home Instead Senior Care.

“It is only through their hard work and dedication that we can honour our mission, which is to enhance the lives of older people and their families,” said Shane Jennings.